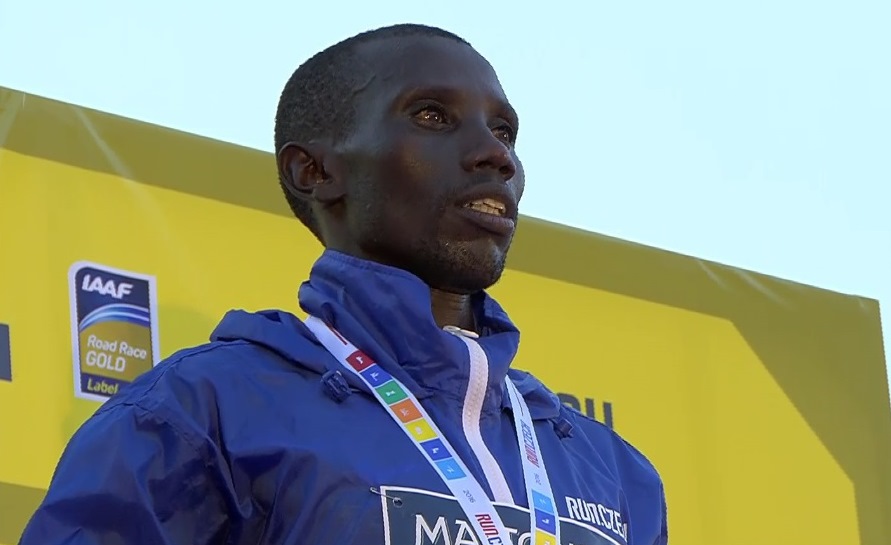 “It was difficult weather,” said Biwott in a brief post-race broadcast interview carried by Flotrack.org.  “I really struggled with it.  I tried my best.”

Biwott, who will represent Kenya in the upcoming Rio Olympic Marathon, told Race Results Weekly before the race that he wanted to run a fast time.  He said that the hot temperatures would give him a unique fitness test in advance of Rio where conditions could potentially be very warm, and certainly humid.

Sticking to that plan, he went through 5 km in about 14:10 (sub-hour pace) with compatriots Geoffrey Ronoh and Richard Mengich, plus two pacemakers.  Moments later, he and Mengich struck out on their own leaving the rest of the race behind.

About 8 kilometers into the race, Biwott dropped Mengich, and the race was over.  Although Biwott’s pace fell off, today’s result showed him that his training for Rio was right on track.

“I think now I am confident in hot weather conditions, and I am now going home to train,” he said.

Mengich struggled to complete the race, and crossed the finish line in 1:05:17.  Third place went to Geoffrey Kipyego, another Kenyan, in 1:06:04.  Ukraine’s Vitaliy Shafar, who didn’t start the race so aggressively, was fourth (1:06:14).

Keitany, who was named as a reserve for the Kenyan Olympic Marathon team, had to shake off early challenges from Violah Jepchumba –who had run three very fast half-marathons earlier this year, including a 1:05:51 in Prague– and 2015 Honolulu Marathon champion Joyce Chepkirui.  Wearing green adidas racing kit and pink shoes, she took command of the women’s contest before the 10-K mark. She even dropped her male pacer.  Finishing seventh overall, she beat second place Edith Chelimo (1:12:15) by over three minutes.

“My race was good,” said an obviously drained Keitany in a brief post-race broadcast interview.