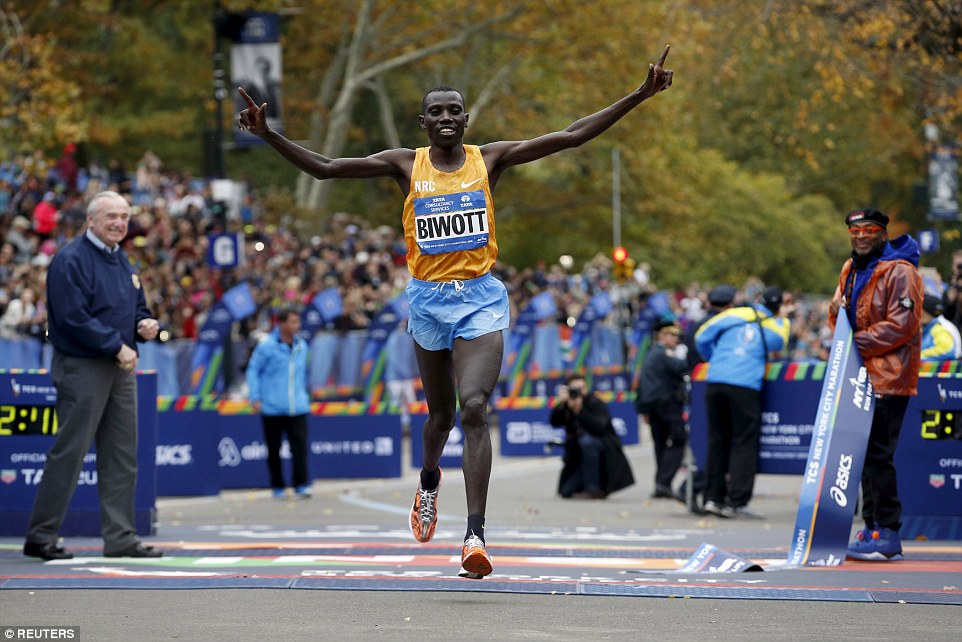 NEW YORK (01-Nov) — For the third straight year, a pair of Kenyans swept the top spots here at the 45th TCS New York City Marathon, as Mary Keitany retained her women’s title and Stanley Biwott claimed his first victory in an Abbott World Marathon Majors event. Keitany ran alone for a majority of the final 10 kilometers, going on to finish first in 2:24:25. After finishing fifth here in 2013, Biwott returned and was able to maintain a brutal late-race pace to the line, taking the win in 2:10:34.

As the defending champion and arguably the best women’s marathoner in the world right now, Mary Keitany came into today’s race with a burden on her petite shoulders. Aware of her current fitness, the 33-year-old wanted to test the field.

“What I can say is that I was very confident in coming to New York City Marathon,” Keitany would tell members of the media, a growing smile across her face. “I wanted to come and try to defend my title.”

Somewhat surprisingly, hanging tough amidst the pack were marathon debutants Sally Kipyego and Laura Thweatt. While Portugal’s Sara Moreira did a majority of the front running, Kipyego and Thweatt ran in her slipstream.

Splitting the half marathon as a pack of nine in 1:12:56, the race was playing into Keitany’s hands. Having run here three times before, Keitany knew that a move too early would likely backfire on the hills of Central Park. Thus, she waited until 30 kilometers.

“I understood the course. I know New York. Many times I’ve come to New York, and I know about the course,” she began. “When I made my move around 30-K, I say ‘okay, let me just go, and if somebody is more strong, she can come, and we can go.’ I was ready to go with her, but fortunately they never got me.”

Steadily increasing her tempo with subsequent surges down Fifth Avenue, Keitany disposed of Kipyego, Thweatt, Moreira, and Frenchwoman Christelle Daunay. She then turned her attention to the East Africans.

Keitany crossed the finish in 2:24:25, becoming the eighth woman to win in consecutive years. The last woman to accomplish the feat was Paula Radcliffe in 2007/2008.

Second in 2:25:32 came Mergia in her debut here, blowing kisses and waving to the crowd, followed by Tufa in third (2:25:50). The pair simply could not match Keitany’s experience and fitness on this day.

“The race was very good, but towards the end I lagged behind because my shoes were uncomfortable and my feet were burning,” said Tufa.

Moreira, Daunay, and Jeptoo rounded out the top six with times of 2:25:53, 2:26:57, and 2:27:03, respectively. All eyes were on American Thweatt coming down the homestretch of her first marathon in 2:28:23, good for seventh place. On Friday, Thweatt told Race Results Weekly that she viewed the marathon as an extended cross country race;n through 20 miles, she was feeling fantastic.

Thweatt will not race at the 2016 U.S. Olympic Trials Marathon in February, opting for the 10,000m on the track. Her coach, Lee Troop, told RRW that it would simply be too much to handle.

“If she was to make the [Olympic] team, then it would be three marathons in ten months,” said the Australian native who resides in Boulder, Colo. “That’s just too much, and not good for her career [long term].”

Thweatt did come away from the marathon feeling a sense of accomplishment. “I didn’t win, but it was just such a huge victory to complete 26.2 miles. I didn’t see myself as being a marathoner. I mean, I’m not. I still don’t consider myself a marathoner. But just to complete that distance on a course like New York with the history and just how tough it is out there, it felt like I won.”

Other notable finishers included Jelena Prokopcuka in eighth (2:28:46) and Boston Marathon winner Rotich tenth in 2:33:19. Kipyego hit the wall after 23 miles and did not finish. According to the New York Road Runners athlete tracker, Kipyego’s split from mile 23 to 24 was 18:19, and she does not have a checkpoint split after 40-K. Buzunesh Deba and Alana Hadley were among other elite women unable to finish.  Deba suffered a leg injury while Hadley hurt her ankle, and actually had it taped by the race’s medical team during the race.

Similar to the women’s contest, the men’s race did not start in essence until the 30 kilometer mark. From the start on Staten Island, through Brooklyn and Queens, more than a dozen men made up the front group. Instead of a race, it looked more like a New York traffic jam.

At halfway in 1:06:49, the East Africans began to get a bit antsy: defending champion Wilson Kipsang swung to the side of the group; World Cross Country Championships gold medalist Geoffrey Kamworor moved up, and Boston Marathon champion Lelisa Desisa’s demeanor changed.

But it was the unlikely tandem of Meb Keflezighi and Craig Leon –two Americans– leading around 15 miles.

“I remember turning to Meb somewhere on First Avenue and just saying, ‘This is a lot of fun.'” recalled Leon, a former college walk-on at Ohio University. “It was a lot of fun out there today.”

Crossing into The Bronx via the Willis Avenue Bridge at 20 miles, the race would shift into a pure speed contest. Kamworor, the IAAF World Championships silver medalist at 10,000m, unleashed a 4:24 mile that turned contenders into pretenders. Surprisingly, former world record holder Kipsang was one of the pretenders, left in the dust.

Stanley Biwott, the 2012 Paris Marathon victor, and Desisa matched the move, continuing on with Kamworor through the 21st mile (split in 4:31). Entering Central Park just prior to mile 24, Biwott continued to push. He was determined not to be broken.

“When I reached the park, I knew the course. I had been here two years ago. So I knew reaching the park there was an uphill,” he said. “I was able to push towards the uphill and to maintain high speed and looking forward to the finishing line. So I was able to maintain high speed, knowing that some few kilometers I would reach the finishing line.”

Biwott would cover the final 6.2 miles in 28:33, a blistering pace that took even Desisa and Kamworor by surprise. Crossing the line in 2:10:34, Biwott celebrated knowing he’d finally won an Abbott World Marathon Majors race. Kamworor and Desisa rounded out the top three in 2:10:48 and 2:12:10.

Biwott credited his victory to coach Gabriele Rosa, who formalized a specific training plan that helped Biwott withstand a hard effort in the final miles. In his previous marathons, Biwott would always succumb to fatigue.

“During my training for the last three months, I was able to change our program and Gabriele Rosa introduced another program for me to be able to run a marathon without getting exhausted,” he said. “So I was happy with the program. I train longer and increase the distance. So today it helped me a lot, and I believe in the program. Thank you.”

Reflecting on the move and the final ten kilometers, Kamworor said he wouldn’t change his strategy.

“I race to win, but I’m happy about the second position,” he said. “I’m looking forward in the future, maybe next year, I’ll come back again and work hard to win a New York Marathon.”

Americans Keflezighi and Leon took seventh and eighth in 2:15:16 and 2:15:40, respectively. Keflezighi’s time is an American masters (40+) record, as well as a masters event record. The previous masters national best was Mbarak Hussein’s 2:13:52.

“It was a phenomenal day, in terms of the crowd, in terms of the weather. The pace obviously was slow at the beginning. Took a lot of patience just to hold it back,” said Keflezighi, 40. “As the race unfolded, I was in the lead in the mix… At the back of my head, I definitely wanted to get the American Masters record. So I used the Japanese guy [Kawauchi] to be able to push a little bit and help each other and barely got it.”

Both Keflezighi and Leon will now turn their attention towards the U.S. Olympic Marathon Trials.

“We don’t know who’s going to show up with what. I feel Nick [Arciniaga, 14th place today] and Craig here, and to be in the lead, you think about those moments,” said Keflezighi. “You imagine it in the Trials. Obviously, I did not have a strong finish, but the time wasn’t really a concern…. Now [we] focus and refocus for the trials.”