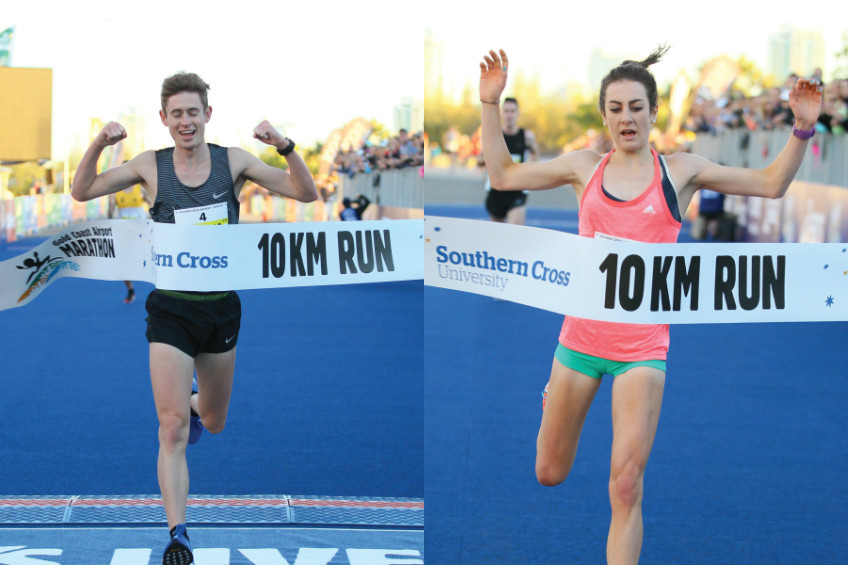 More than 10,000 runners and walkers greeted the starter across all races today, out of a total 26,450 over this two-day major event for Queensland.

Canberra speedster Hugh Williams has built upon a stellar year by taking the Southern Cross University 10km Run in the third fastest time ever recorded for the race.

But to do it, he had to hold off a dogged all-the-way challenge by 25-year-old Andrew Buchanan (VIC) who finished two seconds behind in a personal best time of 29:26.

The women’s race was also taken out by a runner from the ACT with Leanne Pompeani, slashing 75 seconds off her personal best to win in 33:59 almost half a minute ahead of 2015 World Cross Country representative Gemma Maini (34:26).

The men’s race featured an early breakaway. Williams and the Bendigo-based Buchanan headed a group of six for the first five kilometres before they cast off the others in no-nonsense fashion and made it a race in two over the last half.

With three kilometres to go, it was daylight between them and the rest of the field – Buchanan doggedly shadowing Williams but unable to match him as the pace quickened inside the last kilometre for a desperate sprint to the line.

“To be honest I really wanted to win the race and I had to work really hard,” Williams said.

“To get the win was all I wanted to do today.”

Williams said he enjoyed the course and the still conditions.

“It was so good. There was no wind and it is pretty flat except for a couple of inclines that take the sting out of you a little bit.

“But aside from that [it was an] awesome course and cracking day. It’s a lot warmer than Canberra, I can tell you that.”

With his maiden Gold Coast win under his belt, Williams’ sights are now set on courses less flat and friendly.

“In six weeks time, the national cross country championships are on and they’re in my hometown in Canberra, so to run really competitively there on my home turf is the big goal for me.

“That’s another dream for the year and it will top off what has been a pretty awesome 2016,” he said.

“It was really good actually. It was a pretty tough race.

“I managed to stick to Hugh for about nine kilometres and then he just got away in that last kilometre there, but I made a PB so I’m really happy,” he said.

He said he is looking forward to lining up against Williams again at the cross country nationals.

“I’m hoping to find a race between now and then and see how I’m going.

“I just hope to keep running and keep injury free,” he said.

Curran knew early that he had the job in front of him to keep with the leaders.

“I knew I was in pretty good shape, so I just wanted to try and sit on these boys for as long as I could.

“But when we got to four kilometres I knew I would have to try to just hold on from there,” he said.

Pompeani, a Australian Institute of Sport soccer scholarship holder, was another Canberran who appreciated the perfect 11 degree on-course temperature and the chance it gave her to run considerably faster over the distance than she ever has.

“PB wise I took over a minute off my time so I’m pretty happy with that,” she said understatedly.

Bettering personal best times has become something of a habit for the 20-year-old who has set new marks for herself over every distance from 1500m to 10,000m this year.

“This is lovely weather being from Canberra, perfect for running,” she said. “I think I handled it well.”

Her sights are now set on joining the men’s winners in seeking national cross country honours in August.

“Obviously that won’t be a faster time than here, but it will be great to compete against all the other girls in Australia,” she said.

Maini’s podium finish avenged her fourth place last year and sixth in 2013 while Robinson’s successful step up to the 10km distance builds upon her Junior Dash blitzes and her win over 3.2km in her first international race at the 2016 World Schools Championship Cross Country in Budapest, Hungary.

She said she had little intention of completing the full distance, but ran on to finish sixth in 34:44.

“It was really unusual to stand on the line and know that I didn’t plan to finish the race,” Hills said.

“I actually wasn’t sure if I’d finish, so it was nice to come in with everybody else.

“I was committed to a hard five kilometre effort. It’s impossible to find a track or road race at this time of the year so we thought we’d take advantage of the men’s elite field and try to cling on to them for as long as I could.

“I took a little break at the five kilometre point and had a little bit of a walk. I had a lot of concerned viewers.

“I then did a bit of a training session to the finish line and during the last kilometre I got a bit excited and thought I’d see how fast I could run,” she said.

Hills said she enjoyed the change of routine the race provided.

“I’m really happy to be here and finish my training before 7:30am.

“It was a beautiful morning. It’s an amazing event to be a part of, especially with the crowds lining the whole track,” she said.

The first finisher of the Suncorp Bank 5.7km Challenge Katinka Von Elsner-Wellsteed (19:44) from Mt Cotton in Queensland covered the course a minute and a half ahead of Coorparoo’s Elizabeth Wilkins (21:22).

She was another who was lifted by the crowd support.

“I love coming here to race. The atmosphere was lovely and everyone was cheering me on at the end, which was great,” she said.

“I didn’t really have a plan heading into the race. It was a training effort in preparation for an ITU triathlon race in Osaka next week.

“I ended up with a personal best, so I’m pretty happy with that.”

The first male finisher Toowoomba’s Jack Anstey was a man with a plan.

“I didn’t want to lead at least for the first three or four kilometres,” Anstey said.

“I just wanted to work my way into it and tuck in behind the leaders and let them do the work.

“The guy who was leading dropped off with around two kilometres to go and I thought I’d make my surge and hang on,” he said.

Anstey said he is looking at heading to the United States next year to attend college.

“In the meantime, we have a few races here this year that I’m working towards, including the Down Under meet on the Gold Coast next weekend.

The Zespri 2km Junior Dash saw a girl’s champion of the past and future take the chocolates.

2014 winner, 10-year-old Imogen Stewart from Gymea NSW not only beat every boy in the 986-strong field, but set a new girl’s race record when she stopped the clock in the sizzling time of 6:47.

Her time shaved eight seconds off Katrina Robinson’s 2011 record of 6:54.

“But the favourite part for me was probably coming here with my family and enjoying the holiday and having my brother run as well,” she said.

Over the longer 4km distance, last year’s third placegetter Jaxon Paterson-Wright from Coorparoo went two better by taking the 2016 title in a time of 12:39, ahead of Elanora’s Sam McAuliffe (13:31) and Brisbane’s Jake Martin (13:35).

14-year-old Zoe Manning (14:12) from Indooroopilly took the girl’s spoils with a five second win over a fast-finishing Chloe Randall from Cabarlah (14:17) and Mudgeeraba’s Jazi Coventry (14:47).

Paterson-Wright didn’t necessarily enjoy the solitude he had created on the course.

“It was hard running by myself. It was hard to pace myself,” he said.

“The long straights as well, they can be a bit like a mirage. You think it’s close but it’s not that close.

“I was trying to break 13 minutes and that’s what I did, so I’m really happy about that,” he said.

Manning, who will be too old to compete over the distance next year, was excited to bow out a winner.

It appears she may have inherited competitive instincts.

“Next year I’ll go for the [Southern Cross University] 10km and I’ll probably get another PB because I’m in a competition with my mum at the moment to see who’s fastest.

And Manning had some sage but simple advice for any first time runners.

“Try not to trip at the start and also don’t go out super hard because that’s where everything fails and you get tired and lose the race,” she said.

Tomorrow will see close to 10,000 runners set off in the ASICS Half Marathon at 6am and a record field of 6,235 in the 42.195km Gold Coast Airport Marathon at 7.20am, along with a stellar cast of wheelies in the wheelchair marathon and 15km races at 7.15am.