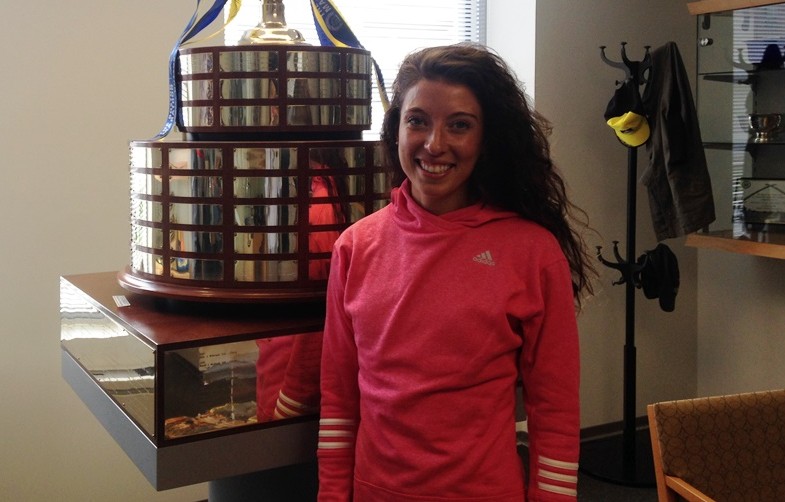 BOSTON (08-Oct) — On a recent afternoon at the Boston Athletic Association’s offices here downtown, Emma Bates sat alongside her boyfriend and spoke of the future. Steps to her left stood the Boston Marathon’s iconic silver trophy, complete with the famed silver unicorn perched on top. Down the hall was a century’s worth of medals, mementos, and pieces of memorabilia, all celebrating America’s distance running legacy dating back to the first Olympiad. Soon, she hopes to add more hardware to those cases as part of the B.A.A.’s own team.

“I’m very excited to put on the kit, the yellow and blue and represent that unicorn. I’m nervous, but more excited,” said Bates, 23, speaking exclusively to Race Results Weekly. “I’ve never raced on the roads before, so this will be a cool new experience.”

One could say a new chapter has begun for the native of Elk River, Minn. Formerly a Boise State Bronco in college, the 12-time All American has traded in her blue and orange uniform for that of another horse, this one of mythical stature. She has joined the B.A.A.’s High Performance stable coached by Terrence Mahon, and transitioned to the professional ranks over the last two and a half months.

Bates’s journey to Boston was somewhat unexpected, a bit surprising, and a whole lot of serendipity. Before this summer, Bates had never ventured farther east than Baltimore, where her sister resides. Following her final race for the Broncos –a disappointing tenth place showing at the NCAA Outdoor Championships 10,000 meters– Bates weighed her post-collegiate options. She loved Boise and the West, an area she’d grown close to over the past four years. Yet she knew that if she wanted to take running to the next level, she’d have to make big changes.

Dan Lilot, Bates’s manager, convinced her to take a trip East to visit the city that once was the hub of running in the U.S., back when four-time Boston Marathon champion Bill Rodgers ruled the roads. Within minutes of arriving in the city, Bates was hooked.

“I love the West and mountains and everything about it, so I just wrote [Boston] off before I even got here. But when I got here, the atmosphere,” she began, pausing to emphasize the immediate impact. “Just the running atmosphere. Everyone runs in the city… It makes you so motivated. Then meeting with the team and all the B.A.A. employees and Terrence. It was so welcoming.”

She loved the scenery, the amount of people running around the picturesque locale, and the people. She was awed by coach Mahon’s stories, his training philosophy and experience. And most of all she loved the team atmosphere, an established bunch that includes three-time Olympian Jen Rhines, 2011 NCAA 10,000m champion Juliet Bottorff, World Cross Country qualifier Elaina Balouris, road racing aces Katie Matthews and Sarah Pagano, as well as Emily Lipari and Cydney Ross.

To say it was a perfect fit could be an understatement.

“I totally bonded with the team. I feel like they have the same values and the same personal goals as I did, so I knew I’d fit right away. It was an easy choice after meeting with them,” says Bates. “Just being on a team and having the girls show me the ropes, and Jen and Terrence who have known the running scene for so long, it’s helped make it seamless.

In Boise, Bates’s final season hadn’t panned out as she wanted it too. While she did earn All-America status as a senior, Bates said her passion and love for the sport had somewhat waned. She lost trust in the training system she was part of, resulting in her struggles on the track. Though she enjoyed the comforts of Boise, a change in scenery was overdue. She needed something that would reignite the passion that had made her a force to be reckoned with in college.

That came in Boston.

Since arriving here, Bates has assimilated well with her aforementioned new teammates. She quickly picked up on the new routine, one that was very different from what she had been used to at Boise State. Among the immediate changes were a new dedicated stretching routine (both dynamic and static), strenuous physical therapy sessions to correct flawed biomechanics, and a more focused training outlook. She now does long runs at a faster clip, and is focusing on 10-K-specific training. The adjustments have taken time to get used to, but Bates is very encouraged by the immediate results thus far.

“It’s a lot different than I thought it would be,” she said. “There’s a learning curve that your body has to get used to what you do. But I’m really enjoying it.”

When asked what the best and worst parts of the transition have been, Bates answers without a moment’s hesitation. Having never previously been able to train full-time with a group of women of her own caliber, she enjoys being tested each day in practice. As for the resulting soreness and muscle aches from her new training regimen, not so much.

“The best part is just learning all the different training philosophies that there are in the world. Terrence has so many different lessons that he has. Just learning everything day-in and day-out, he always has a new story or new philosophy on something I’ve never heard of before. It’s really cool to try and test those out and see how I respond to those types of things and stuff like that. But being able to do that with other people who believe and trust in him completely, I am all in with this. It is incredible. I am all in with this, and having people that are all in with you makes it that much easier,” she said, voice rising with excitement.

So far, coach Mahon has been impressed by Bates’s efforts.

“Watching her in practice I can see why she was a great cross country runner and an NCAA champion. She definitely exhibits a lot of the tools you’d look at for someone coming out of college to be a national class runner,” said Mahon. “What’s impressed me the most with her is that she’s fairly quick [speed-wise], which I didn’t know as much about coming in. I knew she was fast having won races with kicks before. But in terms of raw speed, for someone who doesn’t train for raw speed, she’s got really good turnover.”

Mahon also spoke highly of Bates’s pure athleticism, and her strength in the weight room.

At Monday’s Tufts Health Plan 10-K for Women –which also serves as the USA 10-K Championships for Women– Bates is unsure what she’s capable of. While workouts indicate she is in good fitness, she hasn’t raced in nearly four months. She’s anxious to complete the “rust buster,” her last hard effort before moving to Mammoth Lakes, Calif., for a month’s stint at altitude with the team.

“It’s the best [training] buildup I’ve ever had so far, and I don’t know if that’s because of the training or the change. It gets me really excited,” she said.

To those around her, Bates appears to be a rejuvenated athlete and person. She’s loves the area, and already has a number of favorite running routes (In particular Battle Road, a historic trail in Minute Man National Park that traces the route British Soldiers took to the Battle of Lexington and Concord, marking the start of the American Revolution). She’s begun to explore the area around her apartment near Boston College, and looks forward to each new day.

“I think Emma’s more excited. She’s excited to get out and go after workouts. She enjoys running more now,” said Kameron Ulmer, Bates’s boyfriend. “She enjoys going to practice every day and having Terrence tell her something completely new that she’s never thought of before. He’s so smart, and can teach you so many things.”

“I think what excited her about our group was not only do we have a bunch of women who are similar in times and performances than she is, but they do bring a lot of fun to training,” he said. “Everyone’s working hard, but we’re have a good time. I think she really appreciates that.”

Monday will be Bates’s first race for the B.A.A., one that she hopes is just the beginning of a long and fruitful post-collegiate career. In the next year, all training will be geared toward the 2016 U.S. Olympic Trials on the track, where a podium finish would qualify her for the Olympic 10,000 meters in Rio de Janeiro. The ultimate goal is adding her name to the list of B.A.A. Olympians, while at the same time achieving as much as she can to help the B.A.A.’s team.

Living in the moment, Bates is taking it one step at a time. She’s appreciative of her new surroundings, and how well things have gone thus far.

“I trust in the system, and I think that’s very important,” she said, her tone turning to a deep, sincere, heartfelt pitch. “I fell out of love with running a bit at the end of last year [in Boise], and so that was kind of my issue. Now I’ve fallen back in love with it again, having new places to run and new people to run with. It’s made all the difference.”
PHOTO: Emma Bates at the offices of the Boston Athletic Association with the Boston Marathon trophy (Photo by Chris Lotsbom for Race Results Weekly)