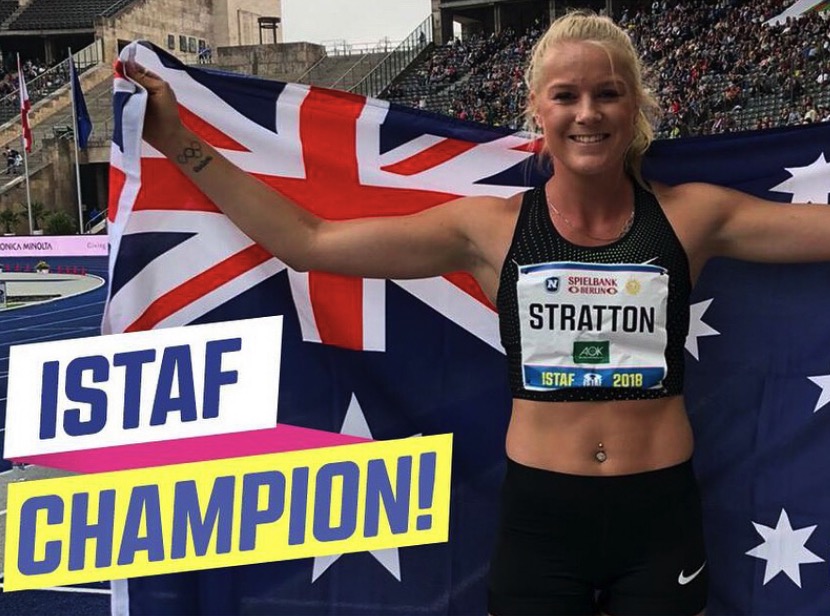 Australia’s Brooke Stratton has won the women’s long jump at the ISTAF meeting in Berlin with a jump of 6.71m. In other Aussie highlights, Genevieve Lacaze was third with 9:23.69 in 3,000 m Steeplechase with a season best time. Colleen Quigley of the US took the 3,000 m Steeplechase win in a strong personal best of 9:10.27 from Daisy Jepkemei (Kenya/9:14.66).

Berlin didn’t disappoint – loved every step out there and placed 3rd with my 4th fastest time ever. @ryangregson25 finished 5th in a stellar field with 3:34.89. Next up, Zagreb in 2 days! 🔥🔥🔥🔥 #istaf @istaf_berlin

Ryan Gregson had another rock solid performance adding to his highly competitive international season, with a 5th place finish and 3:34.89 in the men’s 1,500m. Timothy Cheruiyot again confirmed his position as the world’s number one 1,500 m runner this year. Three days after his triumph in Zurich he won with a fine 3:32.37 from fellow-Kenyan Ferguson Rotich (3:33.21). Ismael Debjani of Belgium was third with 3:34.40.

Yay!! Excited to have won the women’s Long jump today at the @istaf_berlin World Challenge🏆 It was definitely one of my favorite meets to compete at so far! 🙌🏽

Caster Semenya produced another extraordinary result at the 77th ISTAF in Berlin’s Olympic Stadium. A year after breaking the world best for the 600 m the South African stormed to the fifth fastest time in history in the 1,000 m. Running without pacemakers Semenya clocked a world lead and South African record of 2:30.70 minutes. There was a national record for the women’s mile winner as well: Portugal’s Marta Pen Freitas ran 4:22.45. At the end of the meeting Berlin’s Robert Harting was in the focus: 45,500 spectators celebrated one of the most successful German athletes of all time. In his farewell competition Robert Harting finished second with 64.95 m. The ISTAF is part of the IAAF World Challenge Series.

Just three days after an impressive performance in the Diamond League Final in Zurich Caster Semenya produced another thrilling performance. Once the field got going at the second attempt after an initial false start the South African stormed ahead and took the lead. Passing 400 metres in 59.51 she was on schedule for a sub 2:30 time, which could have threatened the 22 year-old world record of Russia’s Svetlana Masterkova (2:28.98). Running without any pacemakers Semenya could not quite hold on during the second lap. Passing the 800 m mark in 2:01.07 she finally clocked 2:30.70. She improved her South African record set earlier this year by 0.31 seconds.

“It was a great race, but I was tiring a little bit because I was leading all the time,“said Caster Semenya. “I am very happy with the time. The crowd was fantastic, the meeting and the stadium are amazing.“ Behind her Uganda’s Halima Nakaayi and Kenya’s Nelly Jepkosgei broke national records as well, taking second and third with 2:34.88 and 2:35.30  respectively.

For the first time in the long history of the ISTAF a women’s mile race was staged. Entering the home straight it was Marta Pen Freitas who came through and won with 4:22.45, breaking the Portuguese record. Kate Grace of the US was second in 4:23.23 while  Germany’s Konstanze Klosterhalfen missed the national record of Ulrike Bruns from 1985 (4:21.59). Klosterhalfen was briefly in the lead in the middle of the race, but could not quite hold on. She still finished third with a fine 4:24.27.

Ivory Coast’s Marie-Josee Ta Lou, the fastest woman in the world this year, won the 100 m with 11.08 seconds from Michelle-Lee Ahye (Trinidad and Tobago/11.13). Finishing strongly Germany’s Gina Lückenkemper took third in 11.18. At the end of the programme Lückenkemper steered the German 4×100 m relay to a win, clocking 42.98 seconds. Great Britain was second with 43.19 and Switzerland finished third in 43.35.

In the Shot Put Christina Schwanitz this time managed to win in the Olympic Stadium a month after just loosing out in the European Championships to Paulina Guba. The German took the Shot Put with 19.25 from Poland’s Guba (18.58).

Three days after finishing third in the Diamond League Final in Zurich Olympic Javelin Champion Thomas Röhler bounced back in Berlin, taking the ISTAF event with 86.50 m. Fellow Germans Julian Weber (85.54) and Zurich winner Andreas Hofmann (85.09) finished second and third. „I had a lot of fun today. Especially the lap of honor felt like at European Championships. Our German triple triumph felt amazing. We live as one team and all get along very well. That’s an important piece of our success. I won today, that was my goal. The result wasn’t too important to me, but 86,50 meters are very good for the end of season,“ said Thomas Röhler.

Tyquendo Tracey of Jamaica took the 100 m with 10.05 from Panama’s Alonso Edward (10.08) and Isiah Young (USA/10.15). This was the farewell race of former World Champion Kim Collins (Saint Kitts and Nevis). The 42 year-old finished eighth in the field of nine with 10.45 and then confirmed: “Yes, this was my last race.“

At the end it was all about Robert Harting. After a spectacular introduction of the athletes it was Robert Harting’s brother who slightly spoilt the party regarding the result: Olympic Champion Christoph Harting won the competition with 65.67 m. His brother took second, throwing 64.95 m at his very last attempt. Fellow-German Martin Wierig was third with 63.67 m. Most of the 45,500 spectators stayed in their seats after the end of the last competition to celebrate Robert Harting, giving him a perfect farewell.

“This was an amazing goodbye at ISTAF today. I feel very honoured that so many people showed up. I always tried to be good example and we have grown together over the past years. Yesterday, I left home a little sad because I knew when I come back home I won’t be a professional athlete anymore. Right now I am really happy and hope I can take all the positive emotions with me,“ said Robert Harting, who won Olympic, World and European gold medals. „Today I felt really great, I was in a good mood and I could not think too much about myself because of the amazing crowd that celebrated such a great party. During my career I am especially grateful about the people who let me be the person I really am. I am really proud that everything worked out pretty well.“

More information about the ISTAF is available at: www.istaf.de