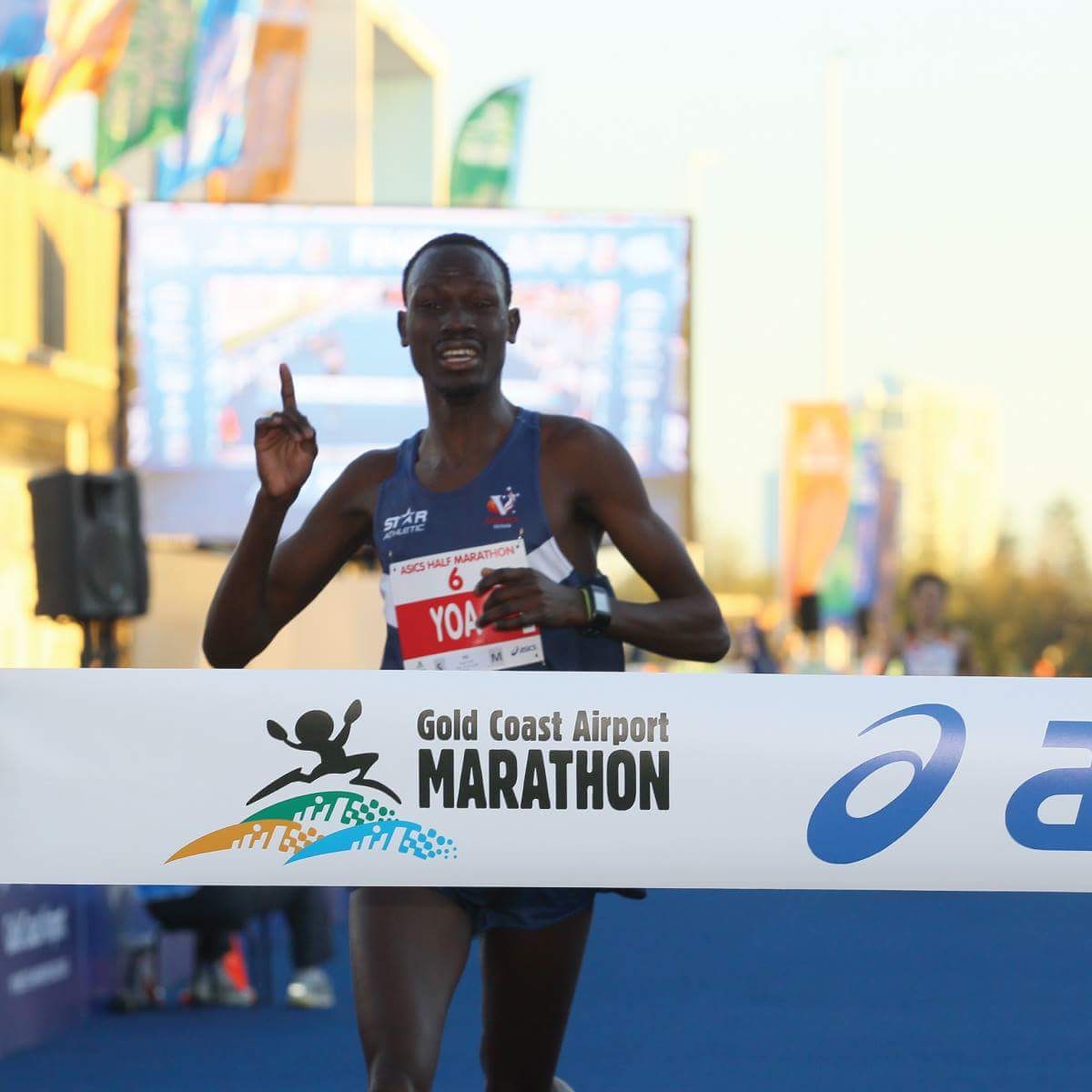 Victoria’s Duer Yoa engaged the afterburners over the final kilometre to record a resounding win in the 2016 ASICS Half Marathon at today’s Gold Coast Airport Marathon.

It was a personal best by the 26-year-old by almost two minutes and also secured him the IAAF Oceania Area Half Marathon and Australian Half Marathon Championships.

Victoria’s Virginia Moloney was stoked with her personal best run of 1:12:25 – slashing almost three minutes off her previous best effort – to run second while Irish-born Victorian mother of two Sinead Diver lowered her PB by 39 seconds to run 1:13:19 and add another podium finish to her second place in the event in 2014.

Yoa said his run exceeded his own expectations.

“I came here to run a PB and I smashed it so that was good,” he said.

“Sasaki sort of set the pace, so some credit to him. I knew if I stayed close to him I would keep it up,” he said.

The 26-year-old Yoa, who was born in South Sudan, said the run had tired him, but he had nothing to complain about weatherwise.

“I’m from Ballarat so it’s usually pretty cool down there so I found it pretty mild this morning, but overall the weather was good; I can’t complain.

“I’m just happy to be in the team to represent Victoria and I’ll be back next year for sure.

“I’ll try and get into world cross [country championships] next year to represent Australia so that will be the next main goal for me, ahead of possibly the [Gold Coast] 2018 Commonwealth Games,” he said.

“It was my first time to run an overseas event and I was able to push myself really well,” he said.

“It’s really frustrating [running second] I really wanted to win [but] I’m really glad that I came in second.

“The first five kilometres were pretty slow, I really wanted to make a pace for myself,” he said.

Kakihara was not happy losing touch with the leaders just past the 10km mark.

“It wasn’t that fast a pace, but after about halfway I wasn’t feeling so great,” he said.

“I was with the other two in the first 10 kilometres, but at 11 kilometres I started losing touch with them.

“So the second half of the race, I was all on my own and it was quite tough,” he said.

As in the men’s event, the women’s race featured another all-the-way win.

At the half way point the 31-year-old Fien was revelling in the nine degree air temperature as she held a commanding 27 second lead over Moloney.

It was a margin she’d extend to 64 seconds at the finish.

Fien credited her Australian Half Marathon Championship victory to finding some perfect, although unsuspecting, pace runners and a very special spirit running with her.

“I was up with a bunch of guys which was awesome; having them around me was fantastic.

“I just cruised with them, and then tussled with this guy towards the end, and just tried to pick it up towards the last kilometre,’ she said.

She said the halfway point was a critical moment in the race.

“I think going through halfway, I just felt like I was in cruise control, and I really wanted to go but I was really worried about pushing too much, blowing up, and potentially losing it.

“I wasn’t quite sure how fast the girls were behind me and I didn’t want to risk it.

“The high point was going through halfway and even going through that 15 kilometre mark and going ‘yeah, OK this is quite easy’”.

She revealed that the Gold Coast win had very special personal significance.

“To have a win on the Gold Coast, it was really important.

“I lost my dad when I was young.

“He was killed whilst cycling home from work, but he did his one and only marathon here on the Gold Coast.

“So it holds a personal place in my heart and I just love the Gold Coast. It’s pretty special to me.

“Towards the end though I was in too much pain, but during the race when it was comfortable I was like ‘yeah thank you, and like yeah let’s do this!’” she said.

A bumper field of 9,891 runners faced the starter of the ASICS Half Marathon in crisp, sunny conditions on the Gold Coast.