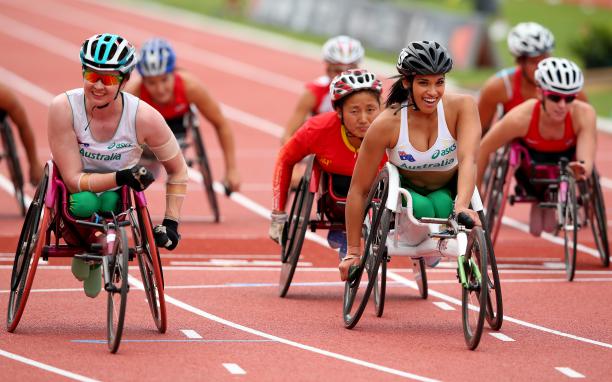 Canberra (ACT) will welcome para-athletes from across the world for the IPC Athletics Grand Prix this weekend.

Coinciding with the 2016 ACT Athletics Championships to deliver a bumper weekend of track and field to the nation’s capital, the two-day meeting is the opening leg of a ten-event series hosted by the International Paralympic Committee.

Ballard stood atop the podium twice at Doha 2015, with victory in the 200m and 400m, as well as bronze in the 800m, providing her the ideal confidence boost ahead of a tilt at Rio 2016 glory this year.

As a winner of ten silver and bronze medals at the IPC Athletics World Championships or Paralympic Games before, her improvement to the gold medal position highlights a determination to improve across a career that spans more than a decade.

“I’ve been in the minor medals for a couple of years now and to make it up to the gold just proves it’s possible. There’s no more doubt that I can do it, it’s now a matter of doing it again at Paralympic level,” Ballard told the International Paralympic Committee.

“I’m more prepared for it than I’ve ever been. I’m fairly confident in what I can do and I believe that when you get on the line you have to back yourself 100 percent.”

“I’m just trying to make the best use of the competition that we get and I want to go as hard and fast as I can in Canberra and also try some different things in some of the longer races,”

Like Ballard, de Rozario is coached by Paralympic icon Louise Sauvage, but the close friends will set aside their mateship this weekend as they line-up next to each other in the wheelchair 400m, 800m and 1500m.

De Rozario is the T53 world 800m champion and last month she edged out Ballard to win the wheelchair 1500m at the Summer Downunder, before Ballard reigned supreme across the shorter one and two-lap races.

Holt’s start in the ambulant 100m and 200m marks her return to competitive athletics for the first time since her outstanding world record and gold medal winning results in the T35 cerebral palsy sprints at Doha 2015.

A nominee for the Emerging Athlete of the Year at the upcoming AIS Sport Performance Awards, Holt is a star on the rise and qualifying performances this weekend can ensure her nomination for selection to the Australian Paralympic Team.

Beattie rounds out the green and gold world champions starting at the IPC Athletics Grand Prix.

A silver medallist in the T46 long jump for arm amputees at the 2011 and 2013 IPC Athletics World Championships, as well as the London 2012 Paralympic Games, Beattie won her maiden gold medal in Doha (QAT) last year.

Coached by renowned jumps coach Gary Bourne, the 33-year-old is determined to close out her impressive career with Paralympic gold.

“For me the gold medal in Rio is the goal this year. It’s the medal that’s missing from my trophy cabinet and to step up from my silver in London would be amazing” Beattie said.

“I’m confident with where I am at. I’ve had no major issues since the world titles last year and I feel that I can jump big this weekend. It’s the start of a big domestic season for me. I’ll be back in Canberra for their Track Classic later this month, and am hoping to jump in Perth and Melbourne before the Nationals too.”

The 2016 IPC Athletics Grand Prix series will feature ten meetings and, with the addition of Oceania in 2015, will ensure that a major para-athletics meeting will be held on all five continents ahead of the Rio 2016 Paralympic Games.

For more information on the IPC Athletics Grand Prix on 6-7 February, including entry lists and the event timetable, please click here.