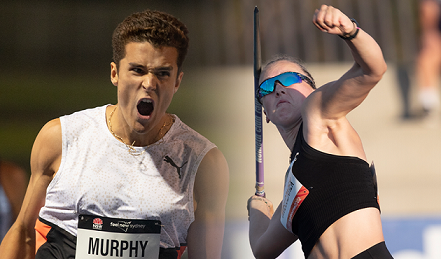 Melbourne, Australia; April 22, 2022 –   The Colombian city of Cali will be the place to be for junior track and field athletes come August, with 60 future stars of Australian athletics set to compete at the World Athletics Under 20 Championships from 1-6 August.

“Announcing an Australian junior representative team is always an exciting experience as so many of our athletes get ready to don the green and gold for the first time,” said Athletics Australia General Manager, High Performance Andrew Faichney.

“We’ve seen a staggering amount of qualifiers over the Australian domestic season, which made selection to this team incredibly competitive and all the more exciting for our athletes. The strength of this team too shows that Australian track and field is on the up and that’s a particularly exciting prospect as we look ahead to the 2026 Commonwealth Games, the Paris 2024 Games and of course, Brisbane 2032.

“To those selected, I’d like to congratulate you on this achievement and encourage you to relish the opportunity. For most of you, it will be your first chance to compete on the world stage, and from a development perspective, this is invaluable.”

The Australian team includes a mix of experience, with Tokyo 4×400 relay sprinter Ellie Beer (QLD) competing in both the individual and relay event, as well as the Australian Men’s Open 200m champion and Australian Under 20 record holder Aidan Murphy (SA) and Torrie Lewis (QLD), who has had a breakthrough season proving competitive with Senior ranked athletes.

South Australians Olivia Sandery and Alanna Peart will also compete internationally for the second time this year after claiming silver at the World Athletics Race Walking Team Championships, while Delta Amidzovski (NSW), who collected four national titles at the 2022 Australian Track and Field Championships, will be the youngest on the team at just 15-years-old.

The team will also feature twins, with New South Wales duo Jasmine and Isabella Guthrie competing in the 400m and 400m Hurdles event respectively, with both on the squad for the 4x400m relay event. The Guthrie sisters will be only the second twins to represent Australia in the sport, after Amy Harding-Delooze and Lily Harding-Delooze who competed on the 2015 Commonwealth Games Youth Team.

Out of the 60 athletes, 19 were previously selected for the 2021 Australian Under 20 team, but were unable to travel overseas due to Covid and other safety issues. Instead Athletics Australia held a camp for selected athletes, with a competition held against New Zealand’s junior team.

18-year-old Triple jumper Aiden Hinson (VIC) said he was beaming with the excitement, after waiting more than a year to make his international debut.

“With Australia not sending a team to World Juniors and battling through the lockdowns last year, it pushed my work ethic harder. It’s been so long since I got my first world junior qualifier and the extra time has helped me in preparing physically and mentally for such a big event. I can’t wait to experience wearing the Australian uniform and doing my country, my parents and all my supporters proud,” he said.

“The camp on the Gold Coast last year gave me an awesome insight into what being on an Australian team is like, so I’m thrilled to be a member again and to have the opportunity to represent my country on the world stage for the first time.”

“I’m excited to be a part of such a talented group of athletes and I’m super keen to gain international experience while competing alongside some of the world’s best Under 20’s.”

The Australian team for the World Under 20 Championships will travel to the Gold Coast for their staging camp from 24th – 29th May, before departing for Colombia late July.