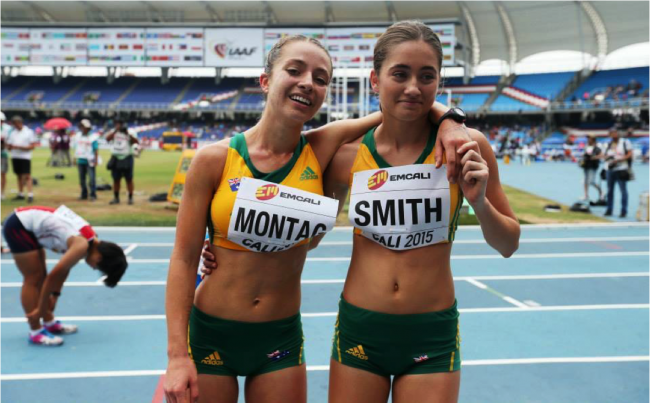 A further four seats on the plane to Bydgoszcz 2016 have been filled on day two of the Australian Junior Athletics Championships.

Bringing the number of automatically selected athletes for the IAAF World Under 20 Championships to seven, those confirming their start in the green and gold today were Joshua Connolly (Qld), Beth Croft (NSW), Adam Garganis (Vic) and Tayla-Paige Billington(Vic).

Competing for the first time since the IAAF World Youth Championships in mid-2015, Connolly made a stunning return from injury to advance past the high jump qualifying standard of 2.16m with his third and final attempt. The clearance was enough to claim victory, with Shemaiah James (Qld, 2.10m) and John Dodds (Qld, 2.07m) winning silver and bronze.

“It was scary on the last jump. This is my first competition for the whole season because I’ve been injured, the first time of a full run-up, but I’m thrilled as to get the qualifier done,” Connolly said.

“I’m just stoked to get on the team. Now I’ve got to train hard and work at clearing something a bit bigger. A big thanks to Gary Patterson. He was so crucial to getting me here.”

The time was her fourth Bydgoszcz 2016 standard this Australian athletics season after clocking a personal best of 10:17.60 to stake a maiden claim in Sydney (NSW) in December.

“I’m so excited. It’s just unreal. It’s such an amazing feeling to know that I am going to get to wear that Australian singlet,” an elated Croft said.

“There was only one other girl with a qualifier so I was just hoping to get first or second. Georgia ran really well for silver, so fingers crossed she’ll get the chance to come and run at world juniors, too.

“I think I’m capable of a top-eight when I get over there. My coach and I set a goal of 10:10for the end of the season and on my second race I ran 10:17 so I feel as though I’m ahead of schedule. The plan is to find that new pace between now and Bydgoszcz.”

Garganis and Billington guaranteed the quartet of automatic selections after winning the boy’s and girl’s under 20 10,000m race walk in qualifying times. Garganis crossed in 43:13.24, while Billington reigned supreme in 47:47.49.

Clara Smith (Qld, 47:59.86) and Zoe Hunt (ACT, 48:20.73) also stopped the clock in quicker than the IAAF World Under 20 Championships qualifying time for silver and bronze respectively.

In other results on day two of the Australian Junior Athletics Championships:

–          Olivia Cason (NSW) qualified fastest for the girl’s under 20 400m final, with Youth Olympic Games gold medallist Jessica Thornton (NSW) and Molly Blakey (NSW) hot on her heels after winning the first and second heats respectively in 55.89 and 56.31. Lawson Power (Vic) advanced quickest in the boy’s event in 47.92.

–          IAAF World Youth Championships bronze medallist Ned Weatherly (Vic) threw 17.06m in the boy’s under 20 shot put to deliver his first national title of the championships ahead of competition in the hammer throw and discus.