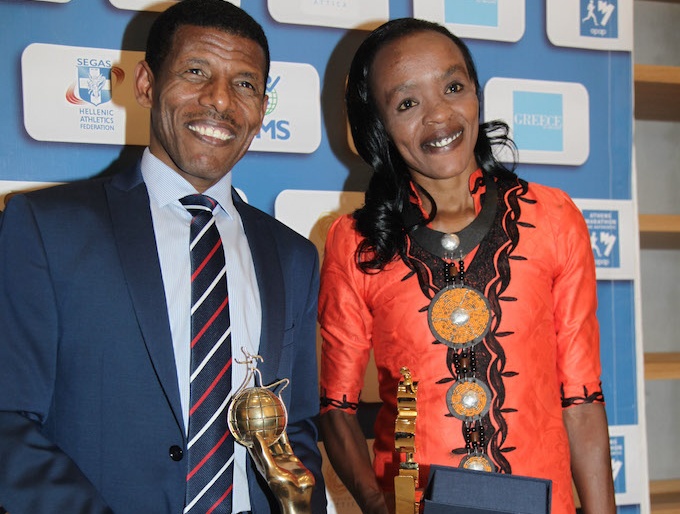 Awards to the Olympic Marathon Champions Eliud Kipchoge and Jemima Sumgong as well as the former world record holder Haile Gebrselassie were the crowning moments of the AIMS gala in Athens, the birth place of the Marathon, on Friday evening. While Kipchoge was unable to attend the ceremony and was represented by his manager Jos Hermens, Sumgong received the Best Marathon Runner of the Year (BMR) award while Haile was honoured in Greece with the Lifetime Achievement award by AIMS, the International Association of Marathons and Road Races. Two more awards were presented on Fridayevening: the AIMS Green Award to the Göteborg Varvet Half Marathon and the AIMS Social Award to the Munich Marathon.

There will be live action on Sunday when the 34th edition of the “Athens Marathon. The Authentic” will be held on the original marathon course of the first Olympic Games of the modern era in 1896, starting in the small coastal town of Marathon and finishing in Athens’ Panathinaic stadium. A record entry of 17,500 runners have entered the marathon and, taking into account competitors in parallel events such as the 5 and 10km, organisers of the Greek Athletics Federation SEGAS expect around 50,000 to participate.

“I didn’t expect that I would one day be as successful as this. There are many women athletes in Kenya who are more talented than me,” said Jemima Sumgong, who won the London Marathon in April this year before capturing the Olympic Marathon gold medal in Rio. The 31-year-old reflected on this as she made her acceptance speech for the AIMS Best Marathon Runner of the Year award at the Gala in Athens on Friday organised jointly by the Greek Athletics Federation (SEGAS) and AIMS, the International Association of Marathons and Road Races. She added that, if selected by the Kenyan Federation for the World Championships next year: “I shall try my level best to win the gold medal in London.”

It was a double Kenyan celebration at the award ceremony since Sumgong’s compatriot Eliud Kipchoge won the male category after the same sequence of wins in London and then the Olympic Marathon. “I am delighted to receive this award for the second year in succession. It is a great honour,” responded Eliud Kipchoge.

Haile Gebrselassie was honoured with the Lifetime Achievement Award, a fresh distinction following his recent election as the president of the Ethiopian Athletics Federation. “I am very grateful to receive this honour and that it should be in Greece, the birth place of the Marathon,” said the 34-year-old Ethiopian.