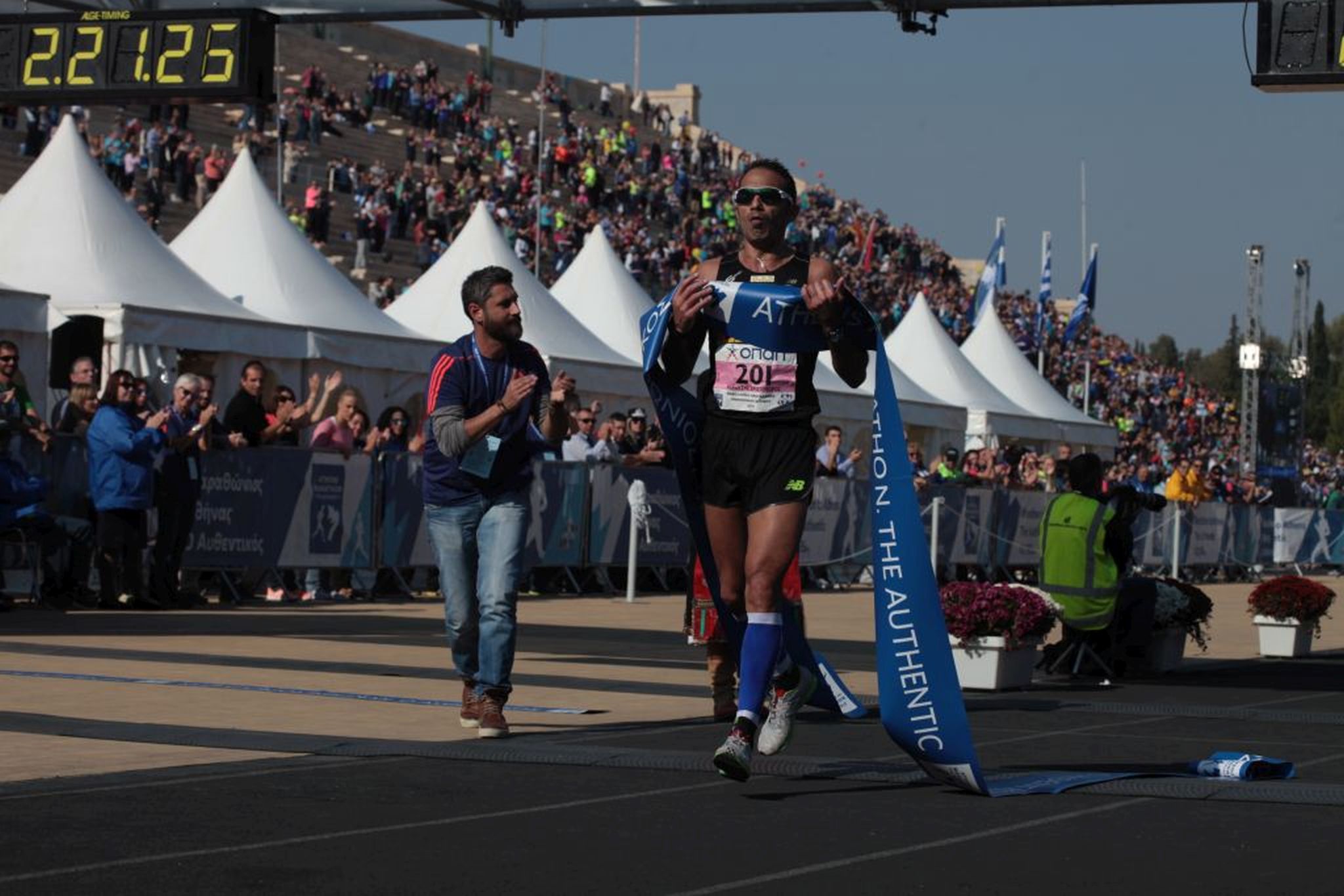 “The Athens Marathon. The Authentic” asserted its status as a unique race despite the problems by financial crisis in Greece. A record number of 16,000 runners went to the start line of this classic race at the very source of the event’s inspiration, the coastal town of Marathon from where the marathon was launched in the inaugural Olympic Games of the modern era in 1896. That marked a rise of almost 25% from a year ago, while SEGAS, the Greek Athletics Federation, recorded a total of 43,000 entries for this and the shorter distance events, held the same day.

For the first time since 2000 the Athens Marathon had a Greek men’s winner, which was largely due to the fact that the organisers had not included an elite international field for the 33rd edition of the race. Christoforos Merousis went into the lead within the first few kilometres from the start in the town of Marathon. Temperatures were warm, reaching over 20 degrees Celsius as Merousis ran to victory in the old Olympic Stadium in Athens, stopping the finish line clock at 2:21:22. The next two men across the line were also from the host nation: Dimitros Theodorakakos finished second in 2:27:03 and Dimosthenis Evangelidis was third in 2:27:28.

The fastest woman on the classic, demanding course was the Japanese Minori Hayakari with 2:52:06. Last year she made her marathon debut in Athens and finished ninth in 2:53:43. Two Greek runners completed the women’s podium: Ourania Rebouli ran 2:54:32 for second and Magdalini Gazea finished third in 2:55:35.

Makis Asimakopoulos, General Director of “The Athens Marathon. The Authentic”, believes that, in the short term, it would be possible to increase the capacity for the marathon to 20,000 runners. “We hope that in three years we shall have the right infrastructure to cope with that size of field,” said Makis Asimakopoulos, who wants to make the race one of the best in the world. “We have a unique status because of history. That’s why we want to make the Athens Marathon one of the best in the world.”

In the last ten years the Athens organisers have also profited from the knowledge of foreign running event organisers. Among them is the founder of the Berlin Marathon, Horst Milde, who has been coming to Athens since 2005. “Today was for me a kind of rebirth of the Athens Marathon. The race is now back with the people. There were standing ovations for the runners, the atmosphere was fantastic. In the meantime the organisation has become so good that other race organisers could learn from them,” said Horst Milde and added: “The Athens Marathon has the town of Marathon as its starting point and the Panathinaikon Stadium as the finish – what more could you ask? This race can become the marathon above all others in future.”

Paco Borao, the president of the Association of International Marathons and Distance Races (AIMS), also singled out the Athens Marathon for its special status. Speaking in Athens, the Spaniard said: “Because of its unique historical background, the Athens Marathon is the race which every marathon runner has to run at least once in their lives. I’m well qualified to say that because last year I ran the marathon here myself.” Paco Borao added that the increasing participation figures were a healthy sign. “That shows that the organisation is done well here. We at AIMS give this race our backing.”