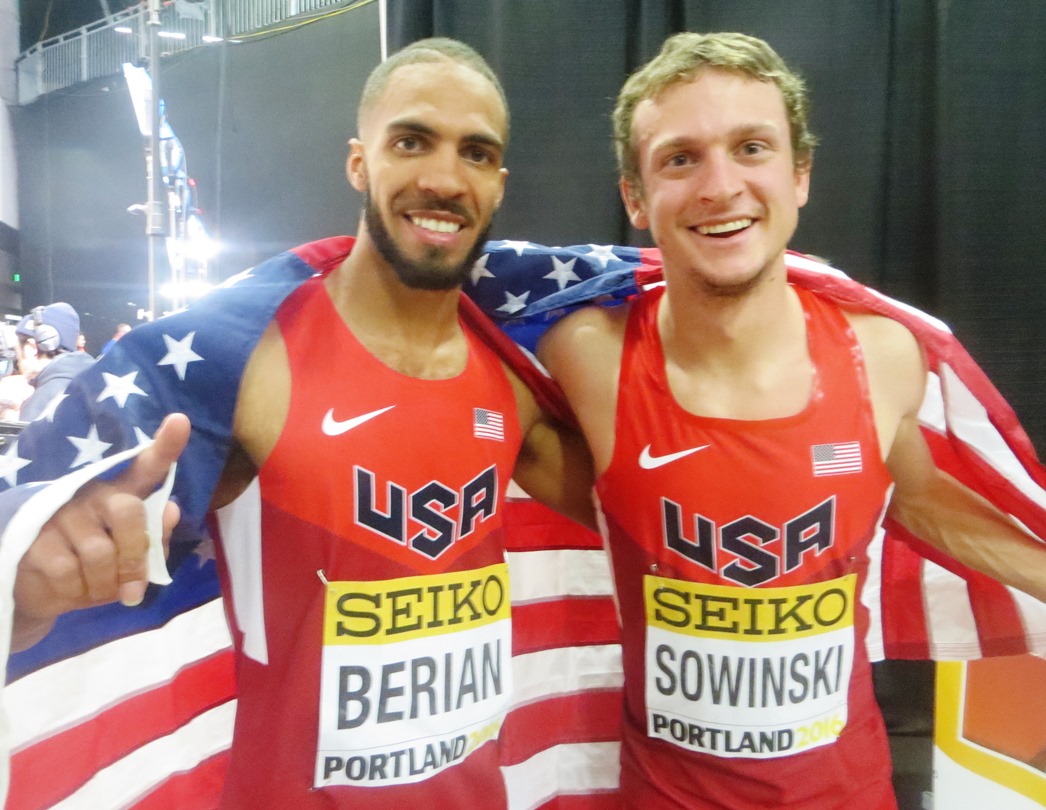 PORTLAND, ORE. (19-Mar) — March Madness is generally a term reserved for basketball in the United States, yet it could fittingly describe tonight’s competition at the IAAF World Indoor Championships. For the first time in history, the United States claimed multiple medals in a men’s 800m final, as Boris Berian won his first world title in 1:45.83 and Erik Sowinski came from behind to capture bronze in 1:46.65. Burundi’s Antoine Gakeme won silver, denying two-time gold medalist Mo Aman a medal.

In a Cinderella story that is film-worthy, Berian went from working in a McDonald’s restaurant to the top of the medal stand in roughly two years time. Trying to support himself after dropping out of college, Berian trained alone before joining Brenda Martinez and the Big Bear Track Club in October of 2014, coached afar by octogenarian Joe Vigil.

After a breakout 2015 that saw him run 1:43.34 outdoors yet fail to advance out of the prelims at the USA Championships, Berian had the most to prove this indoor season. He began by claiming his first national championship here a week ago, and then came into this meet with a vengeance.

From the gun Berian fought his way to the front, leaving the likes of Aman, Gakeme, and Qatar’s Musaeb Abdulrahman Balla in his wake. Sowinski, on the other hand, sat back and waited to make his move.

Through 400 meters in a blistering 49.73, Berian had a three step advantage on the field. Surging with the crowd’s growing cheers, he’d continue to push while Aman and Gakeme did their best to hold on.

Taking the bell, Berian was still clear of the field by five meters. Yet he’d tie-up mightily on the backstretch, feeling the burn of his early tempo. Even so, the American refused to give an inch to his chasers.

“It was simple, just take the lead right away and then hang on. That’s how I feel more comfortable racing and that’s exactly what I wanted to do,” said the 23-year-old. “About 150 to go I definitely started to feel tightening up but definitely the home crowd pushed on and kept me going and got me the gold.”

Berian (and Sowinski) both got some help when Gakeme and Balla tangled feet with 50 meters to go, causing them to lose momentum. Down the homestretch Berian could taste victory as the crowd’s roars became deafening, raised another octave when Sowinski passed a fading Aman for third.

For the first time, two Americans would be on the podium in the 800m discipline. Berian was victorious in 1:45.83, an indoor personal best; Gakeme took second in 1:46.65, providing Burundi with their first world indoor medal of these championships; and Sowinski was third in 1:47.22, the first global medal of his career.

“The hard work that I’ve been going through, it’s definitely been paying off,” said Berian, who is unsponsored. “So exciting. It’s a home championship, we got both Americans in there. It’s exciting.”

On his journey from restaurant worker to rock star, Berian shook his head in disbelief. He was at a loss for words describing the process, only offering that it’s happened quicker than he ever could have imagined.

Sowinski’s trek to the medal stand is remarkable as well, for he only made the World Championships field thanks to an invitational entry from the IAAF which was supported by USATF.

“Man, it’s awesome,” he began. “I can’t even put it into words. Just excited, thankful I got the entry. I’m thankful for USATF accepting that on my behalf and just excited I could go out there and put my best out on the track and get a medal.”

Draped in the stars and stripes waiting for his teammate, Sowinski told RRW that his medal dreams became reality as soon as he saw Gakeme and Balla tangle legs.

“They were coming back a little bit before then and I knew when they tangled legs, I knew that was the chance right there. Man, it was just physical,” he said. “Just tried to keep myself in there.”

With the crowd still cheering Berian, Sowinski, and Gakeme on their lap of honor, RRW asked TrackTown USA President and meet organizer Vin Lananna his thoughts on the race.

Left without a medal, Aman was fourth in 1:47.97 and Balla fifth in 1:48.31. Balla was visibly dejected crossing the line, his race derailed with the final turn mix-up.

At long last, the Netherlands’ Sifan Hassan can call herself a world champion. The 23-year-old bronze medalist outdoors last year was the pre-meet favorite over 1500m, and proved her superiority by injecting a decisive move with 400 meters remaining.

Letting Australia’s Melissa Duncan do the early work up front, Hassan stealthily came to the front a kilometer into the contest. Trailed closely by the Ethiopian trio of Dawit Seyaum, Gudaf Tsegay, and Axumawit Embaye, Hassan was biding her time before letting lose. The Dutchwoman would hit the accelerator 400 meters out from the tape, throwing down a 30.52 circuit of the 200m banked track.

“I knew I would do good today because of yesterday’s heats,” she said, referencing the prelim which she won. “That gave me all confidence as I would do better finish.”

Seyaum and Tsegay, both only 19 years old, could only watch as Hassan kept her lead consistent through the line, finishing in 4:04.96. It was the Netherlands’ first medal of this meet, and second gold ever indoors for 1500m (sprinter Dafne Schippers would add a silver to the Netherlands total minutes later).

“It feels really fantastic. I was so sad in Beijing [after finishing third outdoors] but I make good here. I am so happy to win here,” said Hassan. “I trained very hard for this too and I learned a lot of things from here.”

“We hadn’t really planned anything beforehand, partly because we know that Sifan is very strong. Even if we had employed some kind of team tactics, I don’t know if we would have been able to defeat her,” said Tsegay, speaking through translator Sabrina Yohanes. “But we just hoped that each one of us had worked and trained and prepared well and strong enough to be able to do well.”

American Brenda Martinez did her best to match the moves up front, yet simply could not keep pace in the final lap. She wound up fifth in 4:09.57.

“It was tough. I tried to finish as high as I could, I mean these girls are tough to beat. I’m going to learn I guess,” Martinez said. “They don’t mess around, they can kick anywhere they want, they can throw surges in the middle of the race and it doesn’t shake them at all. It was a good lesson for me.”

Both Martinez and Hassan had strong words about anti-doping following their races. The 1500m globally has been a discipline riddled with suspended athletes and failed tests, including the 2014 world indoor 1500m champion Abeba Aregawi of Sweden.

Asked by RRW her thoughts on the sport, Hassan spoke for more than two minutes on the topic.

“Everyday I saw on Facebook, this girl on drugs, this one is drugs. It is so hard to believe who runs clean and who runs with drugs. But I wish IAAF would control more even in training camp, every time, every single. And I hope in Rio less drugs. I really hope the IAAF really take it serious and every single country, everybody. In Europe, there is more control and doping tests. Even if I want to go train somewhere, I wish they would control us more like at home,” she said.

Asked about the fields at international meets, she paused before answering. “I know I am a clean athlete, but for the people it is so hard to believe who is –you think you can [inaudible]. But I am so proud of everybody who is clean and win, I know they would be proud like I am proud of myself. But if they cheated, only the people would be proud in their self. They know they have cheated, they are already losers. I am really proud for the ones who run clean and I am proud of myself.”