Home Latest News AIMS children’s series hosts first ever event in Iraq
Facebook
Twitter
Pinterest
The second AIMS (Association of International Marathons and Distance Races) Children’s Series race of 2017 was held on 27 July in the city of Erbil, the capital of the Kurdistan region of Iraq, approximately 350km north of Baghdad. This is the first time the AIMS Children’s Series has ever hosted an event in Iraq. More than 900 children, boys and girls, participated in the 2km fun run.

The Association of International Marathons and Distance Races (AIMS) is an organisation of more than 425 of the world’s leading distance races in over 110 countries and territories including the Athens Marathon, the Authentic, Berlin, Boston, Chicago, New York, Paris & Tokyo Marathons. AIMS launched the Children’s Series in 2006 to assist selected AIMS Member races in promoting running among children in areas of need.

The event was staged by The Erbil Marathon organisation for Sport and Peace. The race took place in Samai Abdulrahman Park, the largest and one of the most beautiful parks in Iraq.

Many officials and consular representatives attended including the Governor of Erbil, Nawzad Hadi Mawlood. In his speech at the closing ceremony, he gave deepfelt thanks to AIMS and the Erbil Marathon organisation for staging such an inclusive event. He stressed the importance of sport, and especially running, for children and pledged his full support for future events.

The first Children’s Series of 2017 was held in Quito, Ecuador in June 2017. The final event of the year is scheduled to take place in Khanivali, India in September 2017.

AIMS Co-ordinator of the Children’s Series Martha Morales comments: “We are always delighted to bring the AIMS Children’s Series to new countries and cities around the world. We are very proud to hold our first event in Iraq and look forward to staging even more successful events in the future.”

Abdulsattar Younus of the Erbil Marathon comments: “Seeing the children’s happy and smiling faces, excited and motivated to take part was wonderful. Receiving their first ever medal made them and us very proud. I would like to thank AIMS for their support and for giving us this opportunity.”

AIMS President Paco Borao comments: “The AIMS Children’s Series was created to bring running and enjoyment to places where children often lead challenging lives. I am delighted to see the Children’s Series take place in Iraq. I would like to pass on my sincere thanks to everyone at the Erbil Marathon and the Children’s Series organising committee for putting on such a successful event.”

AIMS launched the concept of the Children’s Series, a series of running events targeted at young people, in 2006 to assist selected AIMS Member races in promoting running among children. Since 2006 the Children’s Series has sought to arrange three events per year with each event taking place in collaboration with an AIMS member race.

The AIMS President at the time of the creation of the Children’s Series, now AIMS President Emeritus, Hiroaki Chosa commented: “Many great athletes have often emerged against great adversity. We are seeking to encourage more young children to follow their dreams and to aim for a healthy life.” The member races involved in the first year pilot project of the AIMS Children’s Series were the Sahara Marathon in Algeria, the Kathmandu Peace Run in Nepal and the Great Ethiopian Run in Addis Ababa.

The first AIMS Children’s Series event was held on 27 February 2006 in conjunction with the Sahara Marathon in Tindouf, Algeria. The event saw 1,000 children taking part in 800m races. The second event was held in October 2006 in association with the Samsung Kathmandu 5km Peace Run. The final event of the pilot year was in November 2006 and saw 3,000 runners take part in races organised by the 6th Toyota Great Ethiopian Run 10km. The top three runners in each category received plaques from a trio of distinguished athletes: Carolina Kluft, Sonia O’Sullivan and race patron Haile Gebrselassie.

AIMS has since gone on to host events in countries where many children grow up facing serious challenges such as Algeria, Nepal, Ethiopia, Rwanda and Mexico. A full list of host races/countries for AIMS Children’s Series races can be found below.

These rights describe what a child needs to survive, grow, and live up to their potential in the world. They apply equally to every child, no matter who they are or where they come from.

In many parts of the world through war, poverty, lack of education and other issues children don’t get the chance to be a child, to play and therefore to access their full potential. Jean Piaget, recognised by most as the world’s greatest expert on child developmental psychology once said “Play is the answer to how anything new comes about”.

AIMS would like to thank all sponsors and partners, current and past who have all significantly contributed to the ongoing success of the AIMS Children’s Series.

History of the AIMS Children’s Series 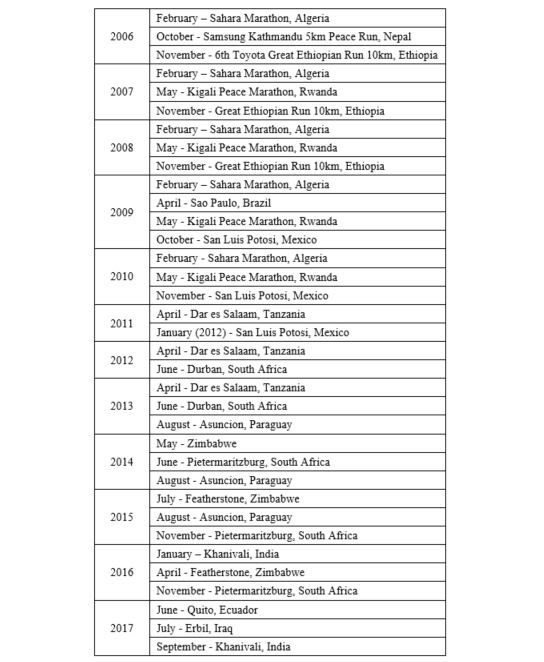 About AIMS
AIMS is a member based organisation and since being established in 1982 has grown to a membership of more than 425 of the world’s leading distance races, from over 112 countries and territories. AIMS Members come from every continent on the planet and include the Athens Marathon, The Authentic formed on the legend of Pheidippides, the Greek soldier-runner who ran from the town of Marathon to Athens in 490 BC to announce the Persians had been defeated in the ‘Battle of Marathon’. Other AIMS members include many of the world’s greatest distance races in history such as the Beijing, Berlin, Boston, Chicago, Comrades, New York, Paris & Tokyo Marathons. The three key objectives of AIMS are: