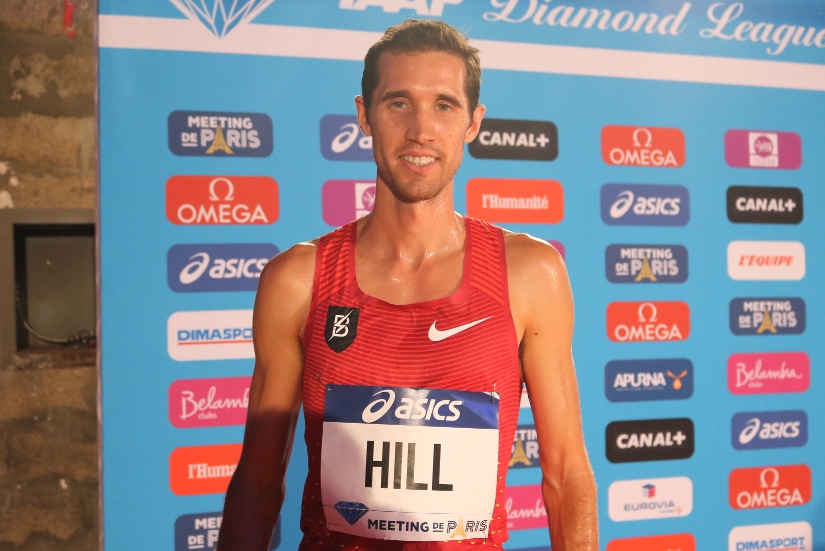 After Trials Disappointment, Ryan Hill Is Motivated To Run Fast

PARIS (28-Aug) — Ryan Hill is running angry, using past experiences to light a burning fire in his fit frame. That rousing stimulus is partially what helped him run 7:30.93 on Saturday at the Meeting de Paris IAAF Diamond League, the third fastest 3000m ever by an American. Though the time was fast and a PB by more than seven seconds, Hill wanted more. He wanted Bernard Lagat’s American record of 7:29.00.

“It’s one of those where I’ll be happy with the way I ran it, if it was just a different race,” he began, recounting the closing laps in vivid detail. He continued: “I thought Mukhtar [Edris] was dying but he had a little something left. I think it may have been better if I let him do the work. I maybe would have had a 28 in me the last 200m.”

Hill has had an up-and-down year to say the least. He won the U.S. indoor national title for 3000m, then charged hard in the last lap to claim silver in the same discipline at the IAAF World Indoor Championships in his backyard of Portland, Ore., taking down Augustine Choge, Abdelaati Iguider, and Caleb Ndiku.

Yet the outdoor season took an unexpected turn for the worse. Transitioning from the 3000m indoors to 5000m outdoors, Hill couldn’t find his mojo at the longer distance. At the Prefontaine Classic he was 15th of 16 finishers in 13:35.74, 36 seconds behind winner Edris. Then at the U.S. Olympic Trials his Rio dreams were dashed by finishing sixth in 13:38.36, a race many thought he would win as reigning national champion.

Missing out on the Olympics has been on Hill’s mind every single day since the Trials race on July 9.

“Not a run or a core session or a double has gone by where I didn’t get angry because of the Trials or the way the season turned out,” Hill told Race Results Weekly. “It’s mostly me to blame. Me and Jerry [Schumacher, his Nike Bowerman Track Club coach] have really discussed that and said that I have to step it up, I can’t slack. It’s kind of how it transpired. I’ve been training slightly angry, slightly hopeful that today would be the type of day it was. In the back of my mind I wanted a 7:28 but I knew it would have to be a perfect race to get that.”

Racing from behind and picking off competitors one by one, Hill took fourth in 7:30.93 here yesterday. The time sits only behind Bernard Lagat (7:29.00) and Bob Kennedy (7:30.84) on the all-time American list.

Hill is somewhat baffled by the 5000m, saying his success in the 3000m should mean he can run much faster and more consistent over 12.5 laps. His lifetime best is 13:05.69 from last year.

For a moment in the media mixed zone following his race, Hill was temporarily “raceless”. He wasn’t sure where he’d compete again, whether it’d be in the Zurich IAAF Diamond League Meet next Thursday, or the New Balance Fifth Avenue Mile in New York City next Saturday. The Zurich 5000m was full he said, and only a strong showing in Paris would get him into the field.

“That was such a good performance, I’d be happy to end the track season like that,” he said.

According to Hill’s agent, Ray Flynn, Hill has now been accepted into Zurich’s 5000m, and will not be racing Fifth Avenue which is only two days later.  Though the fields have yet to be released, Hill could take a crack at sub-13:00, something only six Americans have achieved: Lagat, Chris Solinsky, Dathan Ritzenhein, Kennedy, Matt Tegenkamp and Galen Rupp.