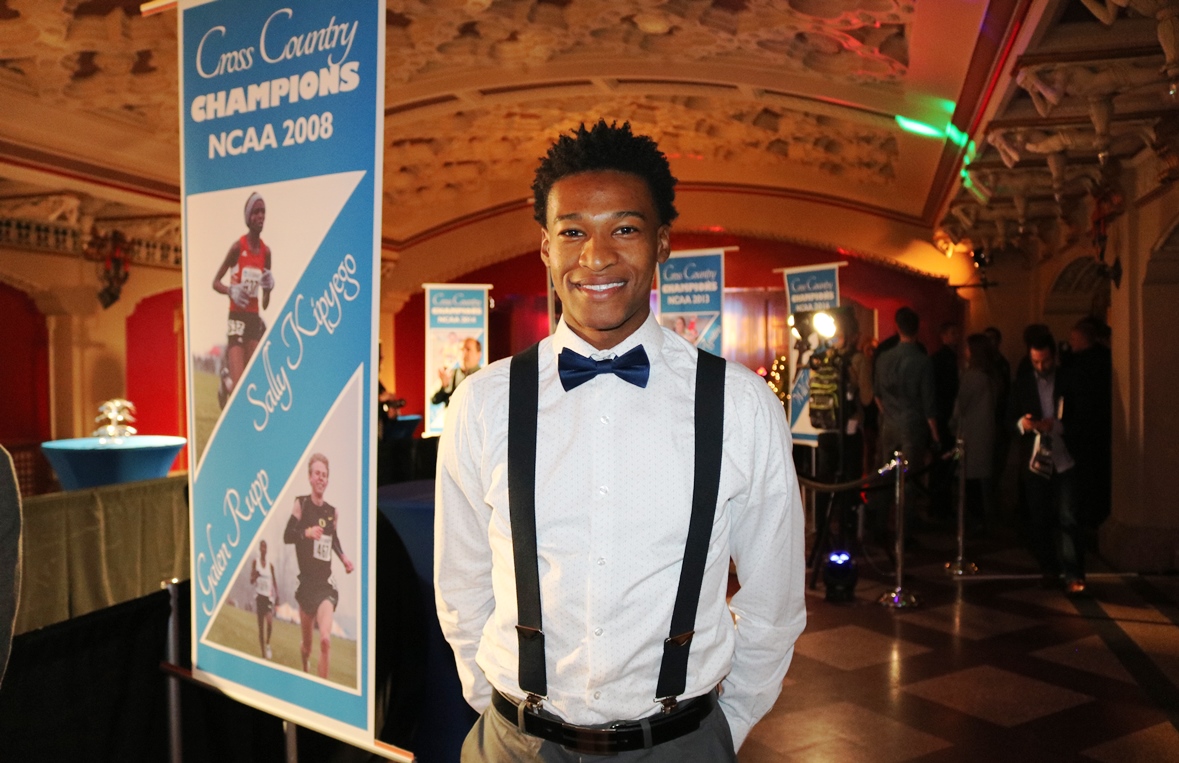 TERRE HAUTE, IN (18-Nov) — It has been a long, and mostly fruitful, year for Syracuse University junior Justyn Knight.  The 20 year-old Canadian from Vaughan, Ontario, may have missed making the Olympic team by the slimmest of margins, but he was the ACC indoor 3000m and outdoor 5000m champion, and ran personal bests of 7:48.71 and 13:26.36 for those distances.  He also won the NCAA Northeast Region cross country title last weekend, setting him and his Orange teammates up for their title defense at the NCAA Division I Cross Country Championships here tomorrow.

Knight seems born to run cross country.  Racing as a sophomore at these championships last year in Louisville, Ky., Knight finished fourth, just one of three Syracuse men to make the top-10 for coach Chris Fox.  Knight said he and his teammates have built on last year’s success and they are ready to be competitive here tomorrow, even without their #3 man from last year, Martin Hehir, who graduated last spring.

“The season went pretty well,” Knight told Race Results Weekly at the NCAA’s Blue Carpet Event here last night.  “Just getting two years of experience under my belt really helped this year.  I’m coming in with a lot more confidence and self-awareness about what I can accomplish.  I’m hoping to end on a good note.”

Knight has excellent leg speed for a distance runner.  On October 14, competing at the Nuttycombe Wisconsin Invitational in Madison, Knight showed a powerful finishing sprint, winning the race by overwhelming Northern Arizona’s Futsum Zienasellassie, another contender for the NCAA overall title here, in the final meters to win by two seconds.  Knight said that sprint speed comes from the strength work he’s been doing this fall.

“I’ve been working on my strength a lot for cross country,” Knight explained, wearing suspenders and a bow tie.  “Track season is when I work on my speed.  I’m very confident in both.  I think that if the race turns out to be hard from the start, it would play more towards my favor just as well as sit-and-kick.”

Oregon’s Edward Cheserek has won at these championships the last three years in a row, and is heavily favored again tomorrow.  But Knight has the advantage of working with a strong team, especially one feeling the pride of being reigning champions.

“It’s different,” said Knight smiling broadly when asked about his team.  “I’ve never experienced anything like this.  I think you have to deal with, you can’t get too nervous about people expecting you to do well, and you can’t get too complacent as well.  That’s a different experience I’ve never been through before.”

Knight wanted to compete for Canada at the Rio Olympics, but his 13:26.36 5000m best last June missed the Games qualification standard by 1.36 seconds.  Instead, he watched the Games on television, and saw his compatriot Mo Ahmed, finish fourth in the 5000m.  Knight said the Rio Games helped motivate him for cross country this fall.  For 2016, his Olympics are here in Terre Haute.

“I think that’s part of the reason I’m running so fast right now,” Knight concluded.  “I’m still a little bit salty from missing the qualifying standard by a second or two, twice.  So, I think now I look at every opportunity as my last, and I just try to perform well and make sure I have no regrets.”

PHOTO: Justyn Knight of Syracuse University at the Blue Carpet Event at the Indiana Theater in advance of the 2016 NCAA Division I Cross Country Championships in Terre Haute, Ind. (photo by Chris Lotsbom for Race Results Weekly)