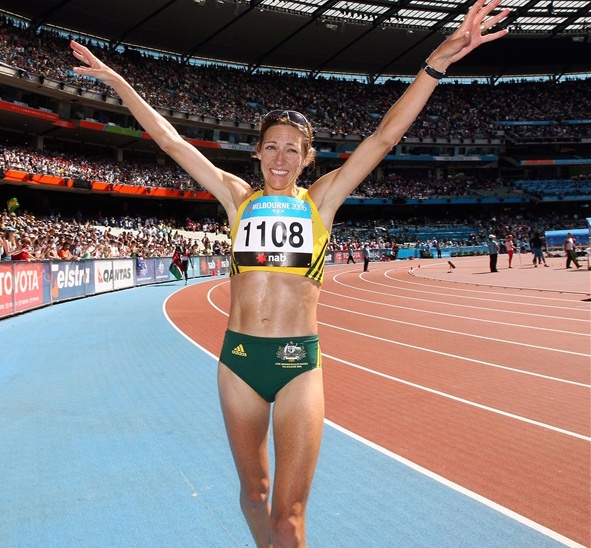 Delivering back-to-back victories in the women’s marathon at the Commonwealth Games, McCann’s victory at the MCG at the age of 38 was one of the most memorable moments of Melbourne 2006.

Stopping the clock in a time of 2:30:54, McCann reigned supreme by a mere two seconds from Helen Cherono Koskei (KEN), with the lead changing six times in the final two kilometres of the race before pulling away in the final 200m to delight the packed MCG.

McCann succumbed to breast cancer in 2008, with her mother Judy Hindmarsh attending the Sport Australia Hall of Fame Gala as a guest of Athletics Australia to accept the honour.

“Kerryn’s amazing performance at the Melbourne Commonwealth Games will live on for generations. Relishing the opportunity to compete in front of a patriotic home crowd she edged ahead of her nearest rival to win the gold medal on the track at a packed MCG,” Grace said.

“To see Kerryn’s memorable performance recognised is fantastic, and it was great to welcome Kerryn’s mother Judy to receive the award on her behalf.”

Advancing to the final of the 4x400m relay final at Athens 2004, the Australian team of Steffensen, Hill, Ormrod and Dwyer were not expected to medal.

Crossing the line in a stunning season best time of 3:00.60, the third fastest ever time by a green and gold team, the quartet won an impressive silver behind relay heavy weights, the United States, as Nigeria won the bronze.

“The relay silver we won at Athens 2004 was amazing. While the team was exceptionally strong they beat higher ranked rivals. That’s what makes it even more special,” Grace said.

“They have rightly been recognised for their most impressive performance on the grandest stage of all – the Olympic Games.”

Kurt Fearnley was a nominee for the prestigious ‘The Don’ Award. Although Jason Day was awarded received the highest honour, Grace commended the star of Australian wheelchair racing as he prepares to do battle in the men’s T54 5000m at the IPC Athletics World Championships.

“Kurt was a worthy nominee for ‘The Don’ Award but unfortunately it was not to be. Those in the mix for the award were inspiring nominees, and I congratulate Jason Day who is held in the highest regard in Australian sport,” Grace added.