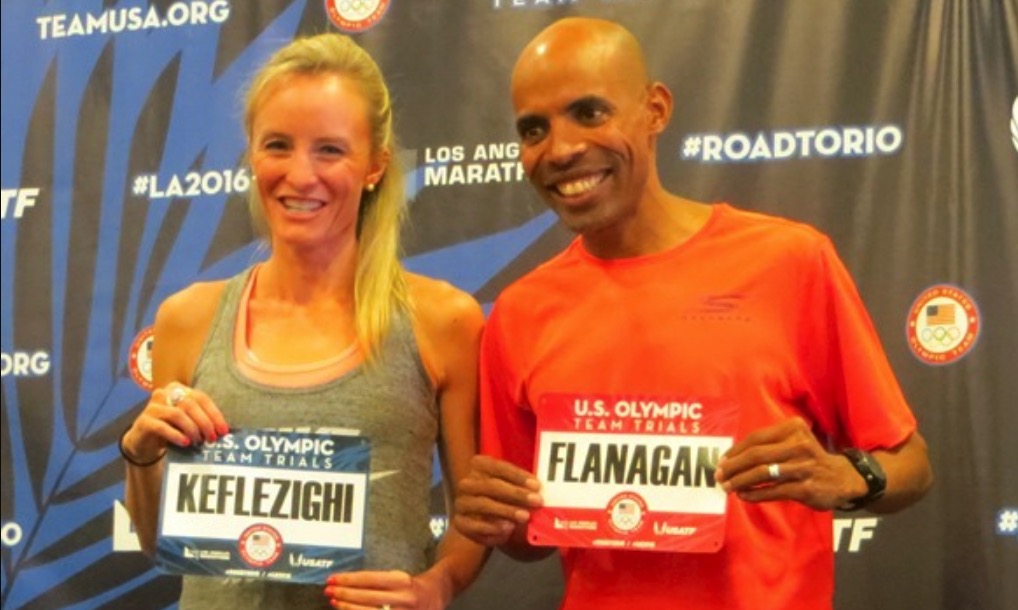 NEW YORK (10-Oct) — The darlings of American marathon running are heading back to New York, hoping to write momentous chapters in their already impressive biographies. For Meb Keflezighi, the TCS New York City Marathon will be the final professional race of his storied career, while Shalane Flanagan, who debuted in the Big Apple in 2010, makes her much-anticipated return to the 26.2-mile distance on November 5, after an injury sidelined her earlier this year.

“It’s very emotional coming back,” said the 42-year-old Keflezighi on a conference call, who will be contesting the five-borough race for the 11th time. “After I did my first New York City Marathon in 2002 I said I never wanted to do another one again.”  But following that challenging debut, he rebounded to author one of the greatest resumes in the sport: collecting silver in the 2004 Olympics in Athens, and winning both New York (in 2009) and Boston (in 2014, setting a career best 2:08:37). “I’m so excited, but at the same time it’s bittersweet, obviously.”

Flanagan, 36, was due to run in Boston earlier this year, but a back injury (a fracture in her iliac crest) forced her to scratch that plan. She recovered in time for an abbreviated, but productive, track season last summer, including a 14:58.99 5000m, and heads into New York feeling refreshed.

“My back is 100 percent,” said Flanagan, a four-time Olympian whose 2008 bronze medal in the 10,000 meters was recently upgraded to silver following a competitor’s retroactive drug bust. “I actually think the injury this past winter was a giant blessing for me. I’ve had uninterrupted training throughout my career, and that was my first major injury. While at the time it was really heartbreaking to have to miss the Boston Marathon this spring, I believe my body really needed that rest. I think there was a point of over-training over the last few years and not really identifying it.”

Both athletes used Mammoth Lakes, Calif., as their key training base during their build-up to the iconic race, taking advantage of the town’s 7,000-foot altitude.  Flanagan returned home to Portland, Ore., only last Saturday, while Keflezighi is still in Mammoth where he used to live (he now lives in San Diego).

“I’m healthy, which is a big battle,” said Keflezighi, whose most recent marathon was a 2:17:00 effort for 13th place in Boston last April. “I hope to be very competitive. I’m here up in Mammoth Lakes, away from my wife and kids for five weeks. I want my last one to be a good one. Many people think it’s going to just be a show, but I would regret if I didn’t give it everything I had. I usually would be fearless going out there competing against the best of the best. We all know that the mind and the body need to be on the same page.”

Flanagan, whose injury had put her schedule out of synch with her Nike Bowerman Track Club teammates, had to log the majority of her training solo, even staying one week at a remote cabin with no internet or cell service. But she was able to feed off Mammoth’s thriving running community.

“Just knowing other athletes around are training hard really has a huge impact on me,” she said of her five-week stint. “I like to know that if I’m suffering other people are suffering, too.”

Flanagan said she maxed out at about 130 miles per week while training in Mammoth, something she said was critical for her to be competing in the marathon’s final stages. “I’ve learned over the last few years that at the end of the marathon what’s not failing me is my cardiovascular system, it’s definitely my legs,” said Flanagan, who ran her career best of 2:21:14 in Berlin in 2014. “I’m hoping that those really big miles I’ve put in will pay off for me on November 5.”

On the heels of last Sunday’s Bank of America Chicago Marathon, both Keflezighi and Flanagan said they are at least a little uneasy about the results posted by Galen Rupp, who won the men’s race, and Jordan Hasay, who moved past Flanagan into second on the U.S. all-time list with a 2:20:57 clocking in third place on the women’s side. Both athletes run for the Nike Oregon Project which, according to leaked documents, is still under investigation by the United States Anti-Doping Agency for potential rules violations.  No wrongdoing has been proven, however, and the program’s coach, Alberto Salazar, has steadfastly stated that no prohibited substances or methods have been used.

“The NOP has been under investigation for the last two years, so as a fan of my own sport it’s hard to have full excitement and faith when you don’t know all the facts yet,” remarked Flanagan.  “There’s still an investigation going on, so it’s hard to truly and genuinely get excited about the performances that I’m watching.”

Keflezighi was also concerned.  “Obviously I’m happy for Galen and Alberto, but there are things that are still going on,” said Keflezighi. “There’s a lot of speculation, and I would love to know what’s going on and how far it’s gotten.”

Elite Miler Will Leer, Inspiring Others Toward a Love for Running