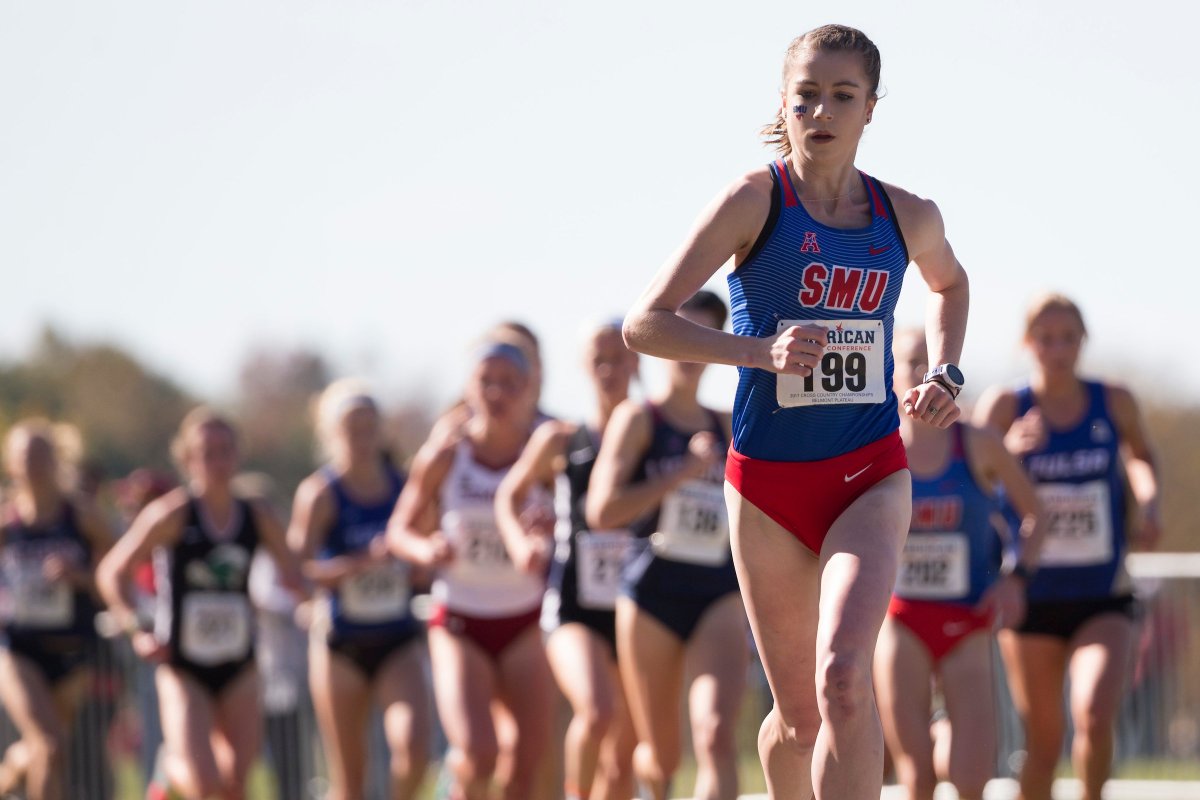 Kiwi Distance-runner Hannah Miller is making waves this season with a series of impressive performances representing Southern Methodist University in the US. Here the 20-year-old Southlander and Oceania 1500m/5000m champion answers our Five Minutes With questions.

What is your best athletics quality?

Distance-running success is born out of resilience and mental strength, and just being able to say no as many times as it takes to get a race/session done. So, my best quality would be my grittiness, although running in the weather we often face in Southland often makes that second nature. I’m okay with the fact training will be hard and some runs will hurt, but I know that if I stick at it, the rewards will come.

Why would you encourage anyone to try athletics?

Athletics gives an individual a purpose. It’s great because you typically train as a part of a squad or team with a great camaraderie there. Yet you and only you are accountable for your results and performances. I love it because I know if I put the work in good things will come and that is exciting to see come to fruition. I feel this mentality is important in life and it can help you achieve academically as well. I’ve certainly experienced that while here at SMU (Southern Methodist University) after completing a double degree and an honours minor.

Aside all of that, I believe everyone needs a ‘why’ and a freedom and for me, training and racing keeps me sane. I feel most at peace and content with the world while on a long run. I would be a nightmare to live with if I didn’t have running to sort out my life thoughts. It’s my therapy.

Conference = ✅ . . . Certainly not the results I was looking for but life throws us some punches and learning to roll with them while being grateful for what the mind and body truely can handle is the greatest lesson of all. (Swipe right to see what dehydration looks like 💀🙃) Incredibly humbled to be out there battling in some tough conditions with awesome company, learning the true definition of never giving up. I am beyond thankful for all the love and support I received from my team, Coach and family when I was hitting the deck! To all my amazing teammates, your talent and tenacity inspire me every single day. Time to get back to work and recover for the next phase 💪 bring on regionals! . . . #idiedalittle #neverfreakinggiveup #allontheline #allinfortheteam #conferencechamps #theamerican #kiwisintheusa #onwardsandupwards

Who was your first coach and how did they influence your career?

Lance Smith was my first athletics coach and I really cannot put into words the way he gifted me with the ultimate dream. Not only did he light a passion within me for the sport, he taught me to believe in myself, and I think the self-confidence and peace I found within running through him is the primary reason I’m still running today. He taught me to view races as opportunities rather than daunting tasks that might entail failure. I still talk to Lance most days and I’m extremely blessed to have a current coach here in the US, who operates in a similar fashion. Running is an individual sport but getting to the start line takes a team effort of support, encouragement and planning and both Lance and my current coach, Cathy Casey, are imperative members of my team.

What are your athletics weaknesses?

I definitely suffer from a perfectionist mindset and I’m very tough on myself when things don’t go to plan. I often spend too much time over- analysing. It’s good to reflect, but you also have to get to a point where you just have to take a bad performance and move on. I’m definitely still working on being better at this.

What is the funniest things you’ve seen on an athletics track?

Other than myself trying to run speed reps, it would be the Southland Boys team wearing our crop tops to run a 4×400 relay at NZ Nationals a few years ago. They pulled off the look nicely.

What is your favourite athletics session?

I love 10km workouts on the track. My favourite is probably 6xmile or 10x1km, I get into a great rhythm and tick off the laps. It’s a great mental workout, that I often draw upon in a race for confidence.

Who has been your toughest rival?

I don’t think there is one specific ‘rival’ per say, but of the current college runners I respect the heck out of Karissa Schweizer, the 2017 NCAA 5000m champion as she puts in a really honest effort every time. The cool thing is she never even made NCAA Cross Country nationals in her second year and then she won it in her third year. That’s pretty crazy. It’s cool to see someone working hard and getting the rewards.

If you could star in another sport which sport would it be?

I did ballet until I was aged 18, so if I wasn’t running I’d probably be doing that, but I’ve always really wanted to give road cycling a crack, and maybe triathlon. I love anything that will push the endurance side of things.

When travelling to a meeting what is the most important item in your
suitcase?

Lance (my first coach) gave me a pounamu fish hook necklace before I left New Zealand, so I always have that in my suitcase. It reminds me of home and why I’m here/where I’m going. I’d also say my quote book. I like to scribble things down and read them back from time to time, so I always travel with that. I usually pick a quote and write it on the back of my race bib, then I can think about it when the going gets tough.

What is your greatest regret?

I don’t feel like I have any major regrets. I’ve always believed in taking every opportunity given to me and worked hard to make it happen. The only downside is this sort of mentality meant I probably gave up an aspect of a normal social life during high school. But I love running it has allowed me to make great connections with people in the sport and there is no ‘normal’ anyway.

Who is the person who most admire?

Murray Halberg is the most inspirational person. His entire mentality regarding running and life, in general, is so human and simple, it’s beautiful. His passion for living the best possible version of his own life by not letting obstacles define him, lead him to greatness and in turn lift others. His story shows people can be more than the expectations others label them as, and I think that’s such an important message. I have the audio of him commentating on his Rome Olympic gold medal on my pre-race playlist, I love listening to it, it’s so simple and accurate and hits all the points of a race perfectly.

I also really admire my Dad, he’s definitely my biggest supporter. He always knows what to say and I’d be lost without his unconditional love and support for both me as a person and as an athlete.

What are you most scared of?

Probably not meeting my own expectations or getting an injury, but I try to not live in fear, and mitigate the risk by recovering well and listening to my body and healthcare professionals.

What is your favourite movie and why?

The Golden Hour is definitely my favourite, it makes me so proud to be a Kiwi and it gives me that belief that anything is possible with a bit of hard work and determination.

When was the last time you looked at your athletics medals?

I have a few of my recent ones on a hook on my wall, so I guess I see them daily, but I never really look at the medals. They are nice and a great reminder of all the hard work, but I run for the feeling not the material reward. I actually get a lot more joy out of looking at my old race numbers, I usually write the time and place I ran on the back (of the race number), as well as what I learnt and how the race felt.

Bol In Medal Contention For 800m

Aussies Holding Their Own In 800m

Australia dominates and we ain’t seen nothin’ yet

How Good is Athing Mu!