A friend of mine ran the California International Marathon recently. CIM is known for producing more Boston Marathon qualifiers (relative to field size) than any marathon other than Boston itself, and indeed my friend’s goal was to BQ. As a 40-year-old male, he needed to finish in 3:12, give or take, to claim a slot. He stayed right on pace through 22 miles, but then cramped up and faded to 3:18—still a PR, but not what he was hoping for.

Afterward, my friend and I had a conversation about what had gone wrong. He had no clue beyond the fact that he had cramped. I asked him how he had trained for his qualifying attempt. He told me he’d run four times per week: three six-mile runs during the workweek and a long run of up to 22 miles on the weekend. I told him the reason he’d hit the wall was obvious: He hadn’t trained enough!

I’m aware that some marathoners don’t have time to run more often than four times per week or more than 40 total miles in a single week. But this wasn’t the case with my friend. It just hadn’t crossed his mind to train more. I see this all the time as a coach—runners who could achieve more if they trained more set an arbitrary cap on their training volume that is not based on how much running they have time for or how much their body can handle.

Coincidentally, the day after CIM a new study on the differences in training patterns between slower and faster marathon runners was published in the Open Access Journal of Sports Medicine. Researchers from the Cambridge Centre for Sport and Exercise Science gathered comprehensive data on the training regimens of 97 recreational marathoners. To no one’s surprise, I’m sure, they found that faster runners trained a lot more than slower ones. The following table summarizes their findings.

Human nature is the short answer. People tend to invest more time and effort in activities they feel they’re good at. It doesn’t take long for each new runner to get some sense of his or her natural ability level. Those who have a knack for it are prone to keep piling on the miles in pursuit of their ultimate limit, whereas those with average or below-average speed are more likely to decide that their ability level is not worthy of an investment exceeding 40 miles per week. This calculus is seldom conscious, but it’s no less real for that. I’ve interacted with thousands of runners over many years and the pattern is clear: Less gifted runners typically hold a tacit belief that they do not deserve to train a lot.

Personally, I feel that passion, not talent, should determine how hard a runner trains. If you love running enough to want to find out how good you can be, even if you’re really not that good, then you should go for it. I’m happy to say that I communicated this message to the friend of mine who fell short of his goal at CIM and he has committed to step up his training for the next marathon. How about you? 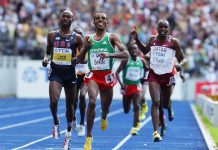