Liam Adams is among the cream of the crop of Australian marathoning. However, since sustaining an injury in the Olympic marathon in Rio last year where he secured 31st place with a time of two hours, 16 minutes and 12 seconds, the Victorian long-distance runner has struggled to regain his fitness and confidence. That is, until last Sunday, when remarkably and with a far from ideal preparation, Adams placed 9th in the Berlin Marathon, which is considered to be at the pinnacle of 26.2-mile majors.

Below is Liam’s post-Berlin Marathon interview with Runner’s Tribe.

On Sunday you clocked a 2:12:52 and a Commonwealth Games qualifying time, finishing 9th overall in the Berlin Marathon. After what you’d say was one of your worst marathon preps, how awesome does it feel to have clocked this PB and finish in the top 10 in one of the world’s premier marathons?

It feels absolutely incredible to run a solid PB and to get a top 10 finish at one of the biggest marathons in the world, let alone do it off what was one of my worst preparations I’ve done for a marathon.

Can you talk about the issues you had in the lead-up to Berlin and your mindset leading into the race?

It all kind of stems back to the injury I sustained in the Olympic marathon last year. I really struggled to get my fitness and confidence back from that injury. I felt like I was half the runner I was Pre Olympics and every time I made progress getting back to that old fitness, I would have a session or a race that would contradict this. Although I had improvements there were still a handful of terrible sessions in my marathon program that put doubt in my mind that I was on the right path towards running a solid race in Berlin.

My confidence also wreaked havoc with my motivation in this program. I had a consistent month or so through the middle of my program but the last six weeks were pretty terrible. It seemed like every Thursday I would skip my session because I felt my body needed a nap after work. By the time I would wake up it was way too late to get out there. I’d either skip the session entirely or change the session to Friday and combine my Saturday threshold into my Sunday long run.

There were quite a few low mileage weeks and skipped sessions, so my program definitely didn’t go to plan. I felt like I was probably two months off being primed to run a fast marathon.

Hopefully, this result will drag me out of the rut that I’ve been in.

What was your race plan and target time?

My main goal going into this race was to run a time that would hopefully secure a spot on the commonwealth games team. That time I thought I needed was a PB and even though I had a terrible prep, I still felt that a PB was definitely achievable.

The pack I chose was the 2.11 pack which was quite risky as I knew I wasn’t in that shape. This pack was made up of guys that wanted sub 2.11 pace and guys that didn’t quite think they were in 2.11 shape. Ultimately the pace was always going to be dictated by the German runner Phillip. I thought that it was going to be a big pack and that if I could get a nice little ride on one of the fastest courses in the world than I could come away with more than just a slight PB. There was also a strong chance that the pack could split into two, including a slower pace group that would be more suitable for my fitness.

In terms of how the race panned out. In the first couple of km’s I thought I’d made a mistake as we were clicking along sub 2.10 pace but after a couple of km’s it went back to 2.12 pace and I was a lot more confident with pace.

It was a bit different to my last taper. At the Olympics three weeks out I began to taper and about four to five days out I was floating and absolutely ready to go. Unfortunately, that changed to stiffness and soreness quite quickly which I couldn’t shake on race day.

This time I reverted it back to a two-week taper with elements slightly different than usual.

2 Weeks Out: I kept the mileage similar to the previous weeks but higher than my usual first week of taper (roughly 170km week) with a 38km easy long run to finish off the week, and the main session being 3x3km which ended up being 2x3km and a one-lap relay leg around Princes Park (roughly 2.57-2.55 pace).

Final Week: The week leading into Berlin, I did two very light sessions like 4x1200m at 2.55-3min pace. Also, shorter jogs roughly 10-13km in the morning and 6-8km at night just to break the day up a bit and make sure I wasn’t sitting on the couch or at a desk for too long. I did double runs right up until Friday and on the Saturday (the day before the race) I did one short (6km) late afternoon run.

I really do feel like I got the taper right this time and it’s something I’ll emulate in the future. For someone who is on their feet all day at work, the biggest problem with my last few tapers was that I was probably too inactive with sitting down or lying down most of the days resulting in stiff/sore muscle groups like my hamstrings, glutes and back.

What was your typical weekly mileage leading into Berlin?

Can you outline a key marathon training session and your times for this?

I did my usual type of key sessions such as 3x6km off a 4min recovery. The times I did weren’t spectacular but at the time I was very pleased with it because I was down on confidence and somehow did this session with ease. The times were 17.51, 17.45 and 17.41.

I thought some of my longer thresholds such as a couple of my 16km thresholds where I averaged 3.06 per kilometre were quite beneficial in this program and gave some good aerobic strength. I also thought that some of those runs where I mixed a threshold into the later stages of my Sunday long runs gave me huge strength and confidence that I should be able to finish off the marathon strong. One of those runs was a 45km run where I did a 13km threshold from 30km onwards where I averaged about 3.03 per km for the threshold part. 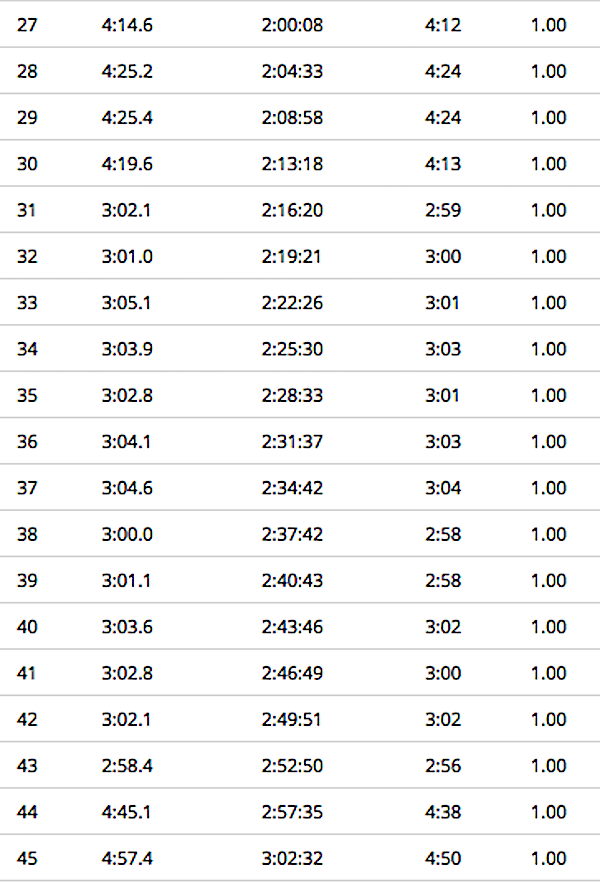 There was also a session that I helped Mitch Brown out with as he helped me out with my 3x6km session. I reckon this session had some big benefits and put me in good stead for Berlin. His session was 7km, 6km, 5km, 4km, 3km, 2km, 1km as a continuous run off 1km jog/float recoveries. We also used this session as an opportunity to practice our fluid and gel intake. Times are below: 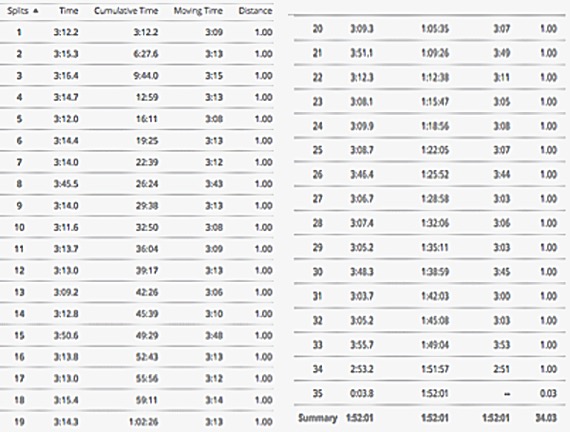 What was the longest training run you completed pre-marathon and at what pace?

My longest run in this marathon prep was the longest run I’ve ever done. I had taken another day off and my weekly mileage was going to be super low for that week. The distance I ran was 50km and I intended to run it slightly under 4minute km’s but ended up averaging 3.35per km. It was a run that I deliberately didn’t take on any gels or water and thought it was a fairly reasonable run considering I did an alright threshold run the day before at an AV winter series event.

What did you eat the night before and for breakfast?

The night before I had some pasta and rice dishes. I try do all my loading the night before so that I don’t run the risk of having a full stomach or getting a stitch during my race. I’ve got this trick that I do for early morning races and breakfast. I used to get this issue where if I woke up during the night before a big race I’d struggle to get back to sleep. Now I use this as an opportunity to have an early breakfast and stop myself from panicking or stressing that I won’t get back to sleep. It works a treat and it did again before Berlin. I woke up around 2am and had a banana, a mandarin, a protein bar and a couple of sticks of chocolate that I grabbed from the athlete lounge and put on my bedside table. By the time I woke up at 6.30am I was still a little bit peckish so I just had a banana and I was well and truly satisfied leading into the race.

We (myself and Mitch) were a bit over our carbo-load by Friday night so Saturday felt quite forced eating pasta and rice. We were craving something a bit different and a little more fattening. Fortunately, we had a KFC located within a kilometre of the hotel so we made the trek there for our post-race meal.

What key lessons have you learnt about the marathon over the years?

What I’ve learnt is that the marathon is such a brutal event. You can train the house down to be in the best shape of your life and still run terribly. There are so many other factors that you need to get right in the lead-up and on the day for you to even get close to running your best possible race. With all my preparations and marathons I’ve run, I’ve always taken away things that I thought I got right and things I thought went wrong. For Berlin, I thought I didn’t get my training preparation right but there was still a number of sessions that I liked and thought were quite beneficial. Some of the things I thought I got right were; techniques reducing the effects of long-haul flights, it was the first time in a long time that I got my taper right and the first time I’ve ever been able to successfully implement a hydration and gel plan during an important race.

I’m really looking forward to next time when I get more of these factors right.

What’s next on the racing calendar?

Next race will be the Burnie 10km in a couple of weeks time. Coming off a marathon, I probably won’t be in the greatest shape but it’s an opportunity that I can use to kick-start preparations for Zatopek or for just in case I need to quickly build up towards another event.

How amazing would it be for you to represent Australia in the marathon at the Gold Coast Commonwealth Games in 2018 after clocking this highly competitive qualifying mark?

It would definitely be amazing. With a result like that under the belt, I’m confident that I can go much better than what I did in Glasgow. But I still have to wait and see if I remain in those qualifying spots by the deadline.