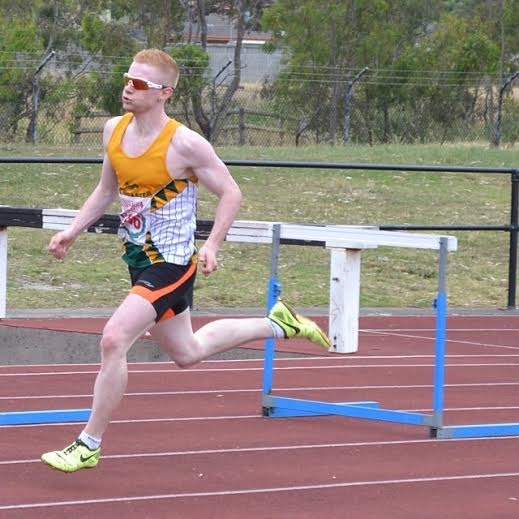 By Matt Fox for Runner’s Tribe

Tom Robertson, thanks for joining us. You just punched a pretty tough workout of 15sec intervals in preparation for what we hope will be Perth Track Classic; your next race. How are things going with you and how has the 2014 domestic season gone so far?

Tom Robertson
Hi Matt, thanks for having a chat with me. At the moment things could be better, after returning from Hobart with a poor performance on the board I am determined to return to Perth which brought some great memories at the Australian Juniors in March 2013. Despite that, I had hip surgery for a clean out in June 2013 and have come back far fitter and stronger (Rehab is tough!!). It’s been for the best. I have been progressing quite well (I think) in training and in some good shape leading into the Briggs Athletics Classic, but what happens on the track in a 400m Hurdles is a completely different thing.

You mentioned that you didn’t feel overly tired after your Hobart race, although you obviously gave it 100%, and felt that you hadn’t quite transitioned into the speed work yet. It would be good to hear a bit more about this thought…

Tom Robertson
My first words to my coach (Leana Joyce) post-race were “I’m not even tired”. That’s exactly how I felt. All 400m Hurdlers would know the feeling post-race; it’s never a good feeling. I didn’t have that. Comparing my touch down splits to my season opening race (December 22nd 2013) over the first 200m, they were considerably slower over the first 200m in Hobart. At the end of the day that means I wasn’t attacking the hurdles aggressively like I usually do. By this part of the race it was all but over for me.
Lessons learnt I hope and at least it’s a good thing learning this early on in the season. So how is training going? What does a standard week look like for you right now?

Tom Robertson
My coach is Leana Joyce; I started with her in December 2009 after being with the late Tom Kelly for my Little Athletics days. Leana is very professional and always organised with how she conducts her training and I am a big fan of that. She probably receives a million or so text messages each week from me so I am thankful she can keep up with that. Haha. My main training partners are Damian Di Donato (110H/200m) who is great for speed work, Kevin Rassool (400m, 48.33) who has been traveling overseas on and off for the past few years.. He has just returned from Sweden so I am looking forward to getting some solid work done with him and also junior 400m man Conrad Coumaros (48.48). We have a solid group of sprint and long hurdlers, including Felicity Black who was 3rd in Hobart 400mH. Also have a great bunch of aspiring junior and senior athletes.

I am also a big fan of jumping in with other training groups or athletes, as it can be quite beneficial. A few weeks back I went to Geelong and got a solid work out done with 400m boys Sam Reiser and Deluca Lawson-Matthew. Today (4/2/14) I’ll be joining Eddie Vining for a rude session of 500m, 400m, 300m, 200m, 200m on diminishing recovery. Will be interesting to see how I fair against a sub 1:50.00 800m runner.

Great coach and a great team surrounding you. What are in the plans for 2014? What are the goals? Any chance of a sneaky 800m in there to test the engines?

Tom Robertson
After finishing off my junior career last season my main goal for 2014 is to make the transition as smooth as possible and start to make a solid impact in senior competitions. But also I think I have to take into consideration 7 months ago I had hip surgery. National 400mH final is what I want, anything can happen from there. I have run a few 600m time trials this season and off limited 800m type training and I think I’ve gone alright. I’d love to drop a sneaky 800m and get a time next to my name, at the moment it’s probably too late but first up next season I think I’ll give one a crack. A few training partners doubted me when I mentioned I thought I could possibly run a decent 800m, so a bet is in place.
Great! What is the bet?

Tom Robertson
A fellow training partner David Mitchell said I couldn’t go sub 1:55.00 in an 800m. If I do, he has to run a 400mH… take note he is scared of hurdles after a few nasty falls!
You should also add into that bet that he has to break a certain time. If he doesn’t, he keeps trying until he does. What do you spend your time on off the track?

Tom Robertson
Haha, I might have too. Dave if you’re reading, get ready for multiple 400mH races. At the moment I am studying a Bachelor of Health Sciences at Latrobe University in Melbourne… I was looking to transfer into Physiotherapy at the conclusion of last year (end of first year), but my form was put in a few days late…woops. 2-3 days a week I am working on the phones at a call center company called Connectnow and just recently I have got on board with Collegiate Draft as a sales representative.
It sounds like you’re keeping yourself fairly busy with training, racing, 2 part time positions and university. You’re also keen on some travel and you’ve mentioned you might head over to Europe or the USA this winter (Summer for Northern Hemisphere) and have a taste. What would be your dream trip, including a racing block and a holiday afterwards…

Tom Robertson
Definitely would be keen to head overseas to compete. Fellow club mate Eddie Vining has raved on about his 2013 European campaign and it’s something I definitely want to do at some stage, hopefully sooner rather than later. Traveling, competing, etc.. The athlete life, can’t think of much better! I am a rookie in knowing where to go, so I’ll have to get some tips! The USA would be amazing, I would especially want to check out ‘Track Town USA’… Oregon and visit the famous Prefontaine trails!

Also, as I love my social media, interviews, training videos etc… I wouldn’t mind going around with Flotrack for a day or two. If you’re reading this Ryan Fenton, send me a message.
You have certainly done an excellent job in assisting Collegiate Draft with the social media so Ryan Fenton, if you’re reading this, Collegiate Draft have recommended!
Back to the travel – You’re friend with the great Jeshua Anderson, 47.9 and 3 time NCAA 400m Hurdle Champion… it wouldn’t be a bad idea to train with him for a training stint in Arizona…

Tom Robertson
I look forward to being in touch with you Ryan. I was lucky enough to race Jeshua at Perth Track Classic in 2013.. racing against someone of his caliber was amazing. Someone who I definitely aspire to be like! Whilst I am at it with the requests, Jeshua… If you’re reading this, I wouldn’t mind joining you for a stint at your training venue, the World Athletics Center!
I’m sure Jeshua would be very happy to have you. How are things going with Athletes Australia; I know you’re quite closely involved with them…

Tom Robertson
Haha, let’s hope so. Matt Lynch and Tommy Connolly kindly gave me the go ahead to start up an Athletes Australia twitter account (@AthletesAust) post 2013 nationals. Slowly but surely it has been budding along as Twitter grows and grows in the Athletic world, and we’ve just cracked the elusive 1,000 followers mark! Over the weekend my phone went into meltdown with all these Commonwealth Games and World Junior Qualifiers (not complaining).. Looking forward to it going into meltdown more often, remember to #tweetthemeet at all events!

I especially love getting amongst the Aussie athletes in College in the USA, they seem to be somewhat forgotten a little so I’m eagerly awaiting the rest of the NCAA indoor and outdoor season!

There have been some big results indoors in the USA already this year… have you or are you considering heading over there yourself?

TR: I’m definitely keeping a keen eye on the Aussies over in the US! Mid last year I got quite interested in College, it became quite difficult and a lot of effort to be contacting coaches myself.. So I gave up. Now that Collegiate Draft has been founded this solves all my inconvenience and effort issues. I still have the fire in the belly to pursue something overseas, if something arose I think it would be rude not to seriously consider it.

Thanks for the chat Matt. Just quickly, thank you to my sponsors Saucony Australia and Body Knots Studio!