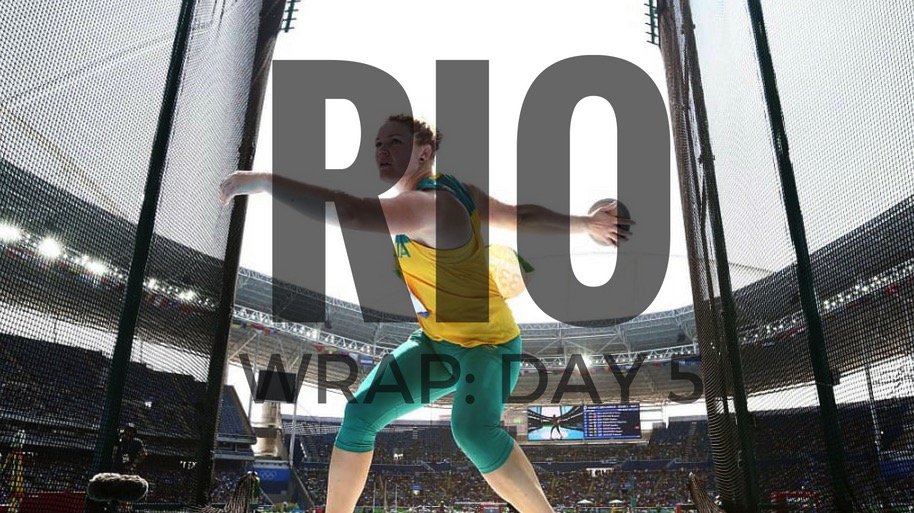 Published with permission thanks to Athletics Australia

Dani Samuels (NSW) saved her best for last with a 64.90m throw on her final attempt to finish fourth in the women’s discus throw final on the fifth day of athletics competition in Rio.

The three-time Olympian was in search of the final missing medal she needed to complete her trophy cabinet which includes world youth, world junior, Commonwealth Games, world universities and world championship medals. She came tantalising close, but alas fell 44cm short of the podium finish.

“I’m just disappointed. It felt like a missed opportunity. Fourth – it’s hard to swallow at the moment,” Samuels said immediately after the conclusion of the event.

Her disappointment didn’t wane, and she later told Fairfax Media, “I have come ninth and 11th at my previous Olympics and now fourth. Now I think about it those positions aren’t great, they all suck: ninth you just miss the top eight, fourth you just miss the medals.

“I guess I will have to come back for Tokyo because this is the only medal I don’t have,” Samuels said.

The Australian distance runners maintained the momentum in the morning session in Rio, with Genevieve LaCaze (Vic), Eloise Wellings (NSW) and Madeline Hills (NSW) all progressing through to the women’s 5000m final.

An elated Wellings summed up the situation perfectly after her race when she said, “I’m just so happy that we’ve got three Aussie girls in the final – it’s huge for female distance running in Australia.”

It certainly is. Australia has never had a finalist in the women’s 5000m and now we have three.

Wellings, who earlier in the week placed 10th in the 10,000m with a 27-second personal best, ran 6th in heat 2 of the 5000m in a season best time of 15:19.02. LaCaze was 7th in the same heat, running 15:20.45. Impressively, this was her thirteenth personal best for the season and we hope she can make that a magical fourteenth during the final. In the previous heat Hills placed 6th in 15:21.33 to secure her spot on the start line when the three Australians line up for the final this Saturday at 10:40am AEST.

This pic says it all… . . Absolutely thrilled 👯 Me & my teammate/roommate/bestie @elzywellings through to the 5km final! Well done to @ryangregson25 who also cruised through his 1500m heat! ❤️️

Ryan Gregson (Vic) looked to be in trouble early during the men’s 1500m heat, where he found himself boxed in and in danger of missing out on progressing to the semi-finals. However, his experience shone through, and the trademark kick of the Victorian nicknamed ‘Little King’ saw him steam home in 2nd place in a time of 3:39.13 to advance to the semis.

“I just wanted to be patient early. My best way to run is to be patient and come home at the end, so I did that and now I just have to recover and do it again in two days’ time,” Gregson said.

“I’ve still got a bit more in the tank, so we’ll have a bit of fun in two days’ time,” he continued.

Alana Boyd (Qld) needed only two jumps in the women’s pole vault qualifying round, clearing 4.45m and then 4.55m to progress comfortably to the final. This will be the second consecutive Olympic final for the Queenslander.

In the evening session in Rio, just 0.01 of a second stood between rising star Ella Nelson (NSW) and a spot in the 200m final, after a sensational third place in her semi-final. Nelson’s run of 22.50 delivered a personal best for the 22 year old and ninth place overall in her Olympic debut.

A PB in the semi-final of her first Olympic Games! #AUS @ellanelson200 you star! #Rio2016 #DoWhatYouCant https://t.co/1Vx9lgmlAr

The Michael Dooley coached Sydney University Athletic Club athlete looked sensational in her semi, prompting athletics commentator Brice McAvaney to declare, “That’s one of the most impressive performances I’ve ever seen by an Australian sprinter in a long, long time.”

Ella was equally as excited, saying, “I am at a loss for words right now. I just did a PB at the Olympic Games. That was incredible. It was so much fun. I felt awesome. I couldn’t have asked for a better 2016. I hate that it is one one-hundredth though, but I am so happy. How can I not be?

“Absolutely not satisfied, but stoked for now, but next year is the London World Champs and then I’ll go for it at Commonwealth Games. This has just given me the confidence that I can do this on the world stage” Nelson said.

Stratton kept her cool under pressure, telling AOC Media, “It’s definitely not the best way to go about it leaving it to the last jump and I definitely felt the pressure because I came here to make the final after missing it last year at the world championships by 4cm.

#AUS @brookestratts is through to the final of the women’s long jump! #Rio2016 https://t.co/8vW1DGlSWE

“So having that in the back of my mind made me realise I needed to jump bigger and that’s what I did,” Stratton said.

There was high drama in the javelin qualifying when Kim Mickle dislocated her shoulder on her third and final throw, after leaving no stone unturned in her race against the clock to recover from shoulder surgery in time for the Games. Only one of the ‘Special Ks’ had a good outing in Rio, with Kathryn Mitchell (Vic) qualifying for the final in 12th position, with a best throw of 61.63m.

Brandon Starc (NSW) bowed out at 2.20m in his high jump final, finishing in 15th place. The 22-year-old, who shares his name with a Game of Thrones character, became a social media hit with many news outlets reporting on his #HouseStarc social buzz.

Cedric Dubler (Qld) is in career best decathlon form after returning from injury in 2015 to post a huge personal best of 8114 points and Olympic qualifier at the national championships. A world junior silver medallist in 2014 where he also broke the Australian under 20 record, Dubler will be our first decathlete at the Games since Sydney 2000 and just the 11th Australian to compete in the decathlon at the Games. Dubler’s first day of decathlon events includes the 100m, long jump, shot put, high jump and 400m – with the 21-year-old concluding his events on day twelve.

Sam McEntee (Vic) is running with career best form in 2016 – with his 5000m time of 13:20.72 he set in May, a personal best. McEntee makes his Olympic debut at 24-years-of-age after beating a strong field in the national 5000m championships.

Also making his Olympic debut is Brett Robinson (Vic) who has previously represented Australia at world juniors, world cross country and two world championships including Moscow in 2013 where he made the 5000m final. The 25-year-old has a best time of 13:18.96.

Patrick Tiernan (Qld) understands what it takes to be an Olympian. He failed to qualify on several attempts by as little as under 1 second. Not ready to give up, Tiernan ran a 5000m personal best of 13:20.88 in Finland, easily qualifying and earning a place in his first Olympic Games.

Selma Kajan (Vic), who goes in the first round of the women’s 800m, has deep-seated roots in athletics. Her mother, Biba Kajan, has a personal best of 2:03.02 in 1985. Thirty-one-years later she still holds the national record of Bosnia and Herzegovina. Consistent domestic form finds Kajan in a good position heading into her first Olympic Games where she aims to bring home definitive 800m bragging rights over her mum. The field presents an incredibly tough challenge for the 25-year-old. Australia hasn’t sent through an athlete into the event’s Olympic final in 56 years, since Brenda Carr won silver in Rome in 1960.

Dubler continues in the decathlon high jump and 400m.

Hamish Peacock (Tas) had success winning this year’s national title. His winning mark of 82.84m needed some extra distance to meet the 83m qualifying distance for Rio. Thankfully for Peacock, he subsequently bettered the distance multiple times in competition, including with a PB throw of 84.39m in May to set up his ticket to Rio. He’s been in great form on the Diamond League circuit and seems ready to launch a big one in Rio.

Josh Robinson (Qld) made just one throw exceeding Olympic qualifying distance in the men’s javelin – and what a throw it was. Finishing second to Peacock at the national championships, the year could have been a loss. However, in a special javelin event in Perth in May, Robinson launched the longest throw by an Australia in six years, setting a mark of 85.11m. A repeat here would see him through to the final at his first Olympic Games.

In other news from day 11 at the athletics in Rio:

·         Lauren Wells (ACT) ran 6th in her 400m hurdles semi-final in 56.83 after some trouble at the seventh hurdle, and said after the race, “I don’t know what happened. I think I got so excited that I went out a bit hard I just assumed that I was going to get the strides in the seventh like I always do and you know, you take your mind off it for one second and there goes the race. You know, to say that I am disappointed is a major understatement right now.”