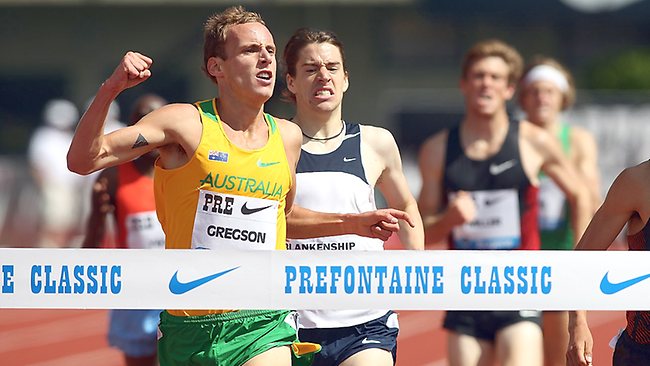 RG: Yeah I think I’m still in shock to be honest. I knew I could run fast, but Doyle’s record was never in the equation. Nic had joked about it but that’s just how I took it, as a joke, but maybe the great man was onto something!

RT: So was Nic Bideau (advisor/manager) and Ian Hatfield (trainer) just as shocked? Or did they sense it coming?

RG: Like I said before, Nic believed in what I could do and Skip (Ian) has been on the journey since I was 6 years old and knows me better than anyone, so I think he knew I was in for something if I had a good day.

RT: Was it the perfect race?

RG: No race is perfect but I didn’t do much wrong I don’t think.

RT: It must feel pretty cool to beat the second fastest man ever over 1500m? Did he congratulate you afterwards? (Note: Bernard Lagat clocked a 3:26.34 in 2001)

RG: Yeah he congratulated me. He’s a nice guy Bernard. Well liked among his peers. I still don’t know how he ran 3:26 though. That’s moving!

RT: What about Andrew Wheating, he just beat you, an equally good run from a 22 year old American. Are you two mates?

RG: Wheating is a talent. Anyone who drops 7 seconds in one race is doing okay. Monaco was the first time I’d met him.

RT: Despite stating in your post-Leonora Golden Mile video interview that you run 100 mile weeks, many around Australia still don’t believe you run so many miles. Can you confirm just how many miles a week you run week in week out whilst is heavy training?

RG: I get up to around there when I’m doing a good solid week. I think the people that don’t believe I train that hard should come down to Wollongong and watch Skip putting me, Kevin Batt and David Ricketts through our paces!

RT: Have you read how the greats like Snell, Coe, Cram and Ovett trained? If so, who do you most liken yourself to?

RG: I know a little bit how Cram and Ovett trained. Both were crazy. Some intense stuff. I’d say my training is more about getting the volume done consistently with no real super intense sessions.

RG: That’s a fast time. I’d love to get in a fast race and have a good crack one day, but I think Jeff Riseley would be the perfect athlete to run a fast 800m. He has incredible natural speed and he could just glide down the track like Rudisha.

RT: The Commonwealth Games 1500m final is going to be a tough showdown against some very good Kenyans with a few other dark horses. If it is a tactical final, like most of them seem to be, do you fancy yourself to out-kick everyone?

RG: My goal is to make the final then once I’m there, as you know how championship 1500m’s go, anything can happen. I’m running well, so hopefully I will be in the mix.

RG: I’ve kind of put a bit of pressure on myself now! As a young kid I had dreams of one day running 3:29. The number just sounds good. Hopefully over the next few years I can remain injury free and get some good training in and give it a real tilt.

RT: What is the plan between now and the Commonwealth Games in October? You mentioned you might race the London Diamond League? Are you at all worried about over racing?

RG: I’m unsure as to what I’ll do. I’ll let Nic work out the best plan for me. Don’t worry, I’ll make sure I get some good training in.

RG: Like I said before, if that’s in the plans then great, but I just need to get some training done over the next little while.

RT: You stated in your post race interview that a 3:31 means nothing and it is the championship medals that count. If you could only have one – The Australian 1500m record, or Commonwealth Games 1500m Gold, what would it be?

RG: Easy. The medal. Anyone can come out and break a record, but a medal, it’s with you forever.