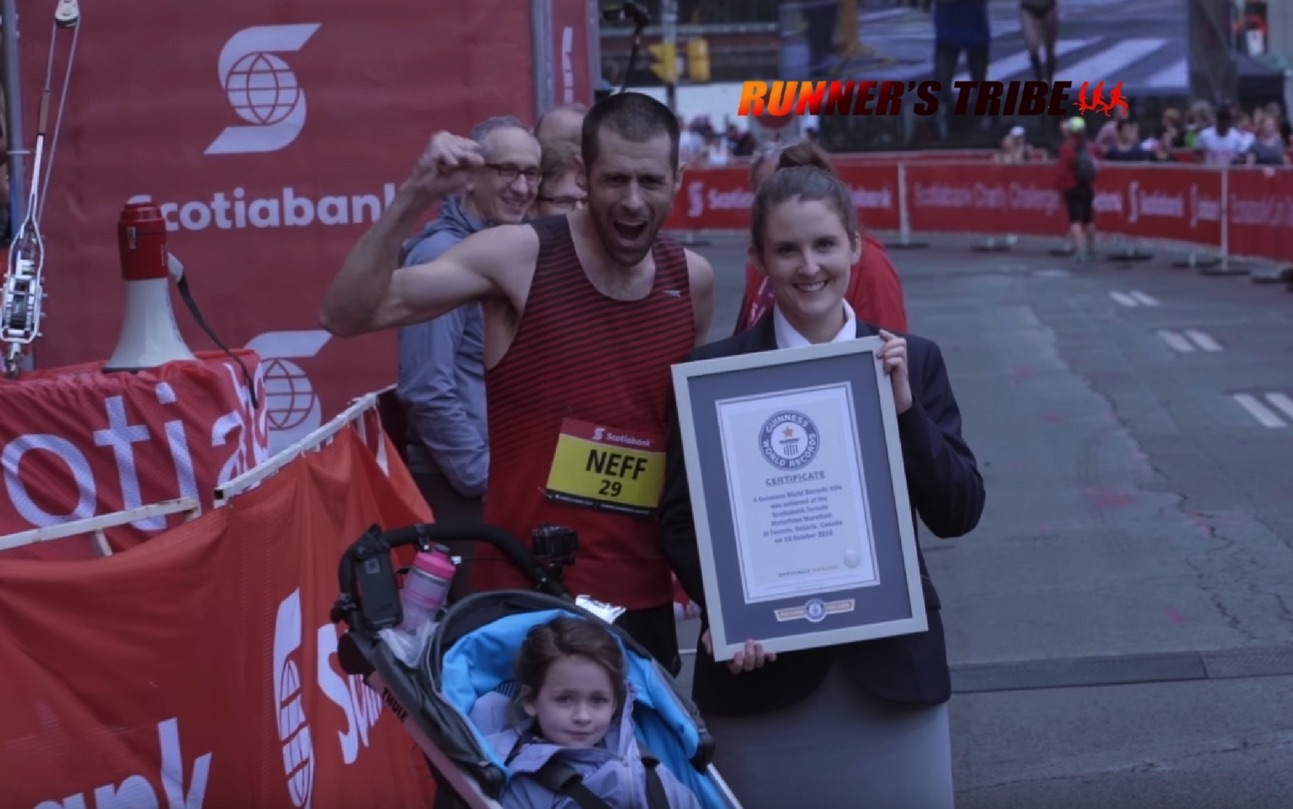 The recent marathon world record highlights a useful way for parents to exercise.

(Inside Science) — Earlier this month, at the Scotiabank Toronto Waterfront Marathon, Calum Neff set a world record for the fastest marathon by a runner pushing a stroller. Finishing in 2:31:22, his time was almost a full minute faster than the previous record, set by Zac Freudenburg in 2009.

Many stroller-pushing parents wouldn’t be able to keep up with Neff’s sub-6-minute-per-mile pace for a few blocks, let alone for 26.2 miles. But how much extra work does it take to push a stroller while running? Researchers in Seattle have a possible answer.

Biologist Cara Wall-Scheffler and her former student Ryan Alcantara, who currently works for a running shoe manufacturer, presented a research poster on the rigors of stroller running earlier this year at a meeting of the American College of Sports Medicine in Boston. The work began when Wall-Scheffler, who studies the evolution of human locomotion at Seattle Pacific University, began watching how people run with strollers. She studied their posture, arm swings, and if they used one or two hands to push the stroller, among other details.

Some people would even push the stroller ahead of them, take a few strides, and then push the stroller again. After some initial observations, she and Alcantara designed an experiment to investigate how running with a stroller affects the way runners use energy. They identified three separate steering techniques to test: one-handed, two-handed and push-and-chase.

They asked 16 runners to take to the track, first without the stroller and running at their normal pace while wearing medical equipment to measure physiological details such as heart rate. Then, also wearing the equipment, the subjects used the different techniques to guide a stroller containing a simulated toddler weighing about 35 pounds, which allowed the researchers to identify the amount of additional effort required to push a stroller while jogging. They found that pushing the stroller with two hands increases the amount of calories burned by about 5 percent, pushing with one hand increases it by about 6 percent, and the push-and-chase method increases it by about 8 percent. Alternatively, runners could lag behind their usual pace, but still burn the same amount of energy as they would when running faster without the stroller.

Alcantara developed a calculator that runners can use to estimate their own calorie expenditure based on pace, distance and pushing technique.

What exercise physiologists appreciate about the research is that it took real-world measurements on something that could previously only be estimated.

And it’s useful for parents, too, for example when choosing between stroller pushing techniques.

The strenuous push-and-chase steering method uses the most energy, but can help turbo-charge a workout, said Alcantara. “Depending on what the individual is trying to get out of their stroller running session, [the push-and-chase method] might be the most preferred option,” he said.

But no matter what method parents use, stroller running can help them juggle multiple demands. If they don’t jog with their child, exercise often comes with the extra cost of child care, if they’re able to find the time at all. More significant than a 5-8 percent difference in expended energy between pushing techniques is the difference between jogging with a stroller and not at all.

In future research, Wall-Scheffler and Alcantara may also explore other, less common pushing techniques, as well as how pushing a stroller affects torso rotation and related energy costs.

Alcantara put Neff’s record-setting marathon performance into his calculator, and although he noted that the model wasn’t designed with high-performance athletes in mind, he was able to make some rough estimates about Neff’s energy expenditure during the marathon. If Neff weighs 70 kilograms (154 pounds), then he would have expended around 2,800-2,925 calories during the record-setting run, depending on how he pushed the stroller throughout the race. Those figures are probably too low, Alcantara said, because they assume the same conditions and equipment used in the study, and not the specific details of Neff’s stroller, his daughter’s weight and the marathon course they traversed.

Still, it probably means that Neff burned a couple hundred more calories than he would have if running at the same pace alone. If Neff were to make another run at the record, his marathon co-pilot — his 4-year-old daughter, Alessandra — might not be the one who comes along for the ride. Neff tweeted last month that another baby girl is due to join his family next March.