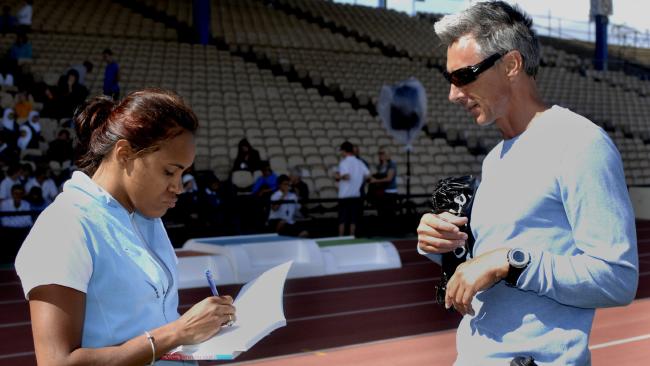 RT: Nic, thanks for your time. It was an up and down year overseas for your athletes. Let’s start with Jeff Riseley. He failed in Daegu over 1500m yet stunned us in Rieti over 800m. What are your thoughts for him come the London Olympics in terms of what event he has the best shot at?

NB: That’s really up to Jeff to decide. He is qualified in both but it will be his decision as to which event he focuses on at the trial. I haven’t got around to talking about that with Jeff yet. I am more concerned with him getting fit again and improving on the areas that let us down in 2011 before I worry about which event he does. Whichever event he decides on won’t affect his training over the next few months so there is still a lot of time for that to unfold.

RT: Moving onto Zoe Buckman. She came on strong and was unlucky to miss the team for Daegu. Do you think the selectors should have made room for her?

NB: Well if she does make the team to London we’ll be sending an athlete that has had no experience at a global major championship as a result of not sending her to Daegu. I think there is so much for our athletes to learn about racing in championship conditions against the very best that we are foolish not to take the opportunity to give an emerging athletes such as Zoe experience in that situation ahead of the main event – the Olympics.

RT: Likewise, Lachlan Renshaw. He had a B-qualifer but was left at home. Australia ended up having no starters for the men’s 800m, when the selectors could have easily placed Renshaw in the line-up. Do you see any point in not selecting athletes like Renshaw or Buckman for such teams?

NB: I think the IAAF make the rules as to which athletes they will accept entries for. I don’t see why we need to place the bar higher than the IAAF set it at. We don’t make our tracks longer down here do we! If we want to encourage people to put their lives on hold to pursue this sport we should be selecting them if we can.

RT: Another of your chargers, Kaila McKnight, had a great year, lowering her personal best over 1500m to 4:05 and making the semi in Daegu for the 1500m. Do you think Kaila can take that next step in-between now and London to hopefully see her in that final?

NB: I don’t think Kaila has finished improving. Kaila had a very good year but I can still see areas where she can improve. Hopefully she can take another step forward in 2012.

RT: Ryan Gregson has had more than a few injury concerns. Are you confident that he has put these behind him now?

NB: Let’s hope so. We’ve certainly taken plenty of measures to try and ensure he can put his injury concerns behind him. Hopefully he’ll get a good run from now and put the training weeks together and give himself a real shot and competing with the very best next year.

RT: Ryan stated in an interview with us last week that he wants to build his mileage to around the 220 km per week mark once his biomechanics problems have been resolved. Was he taking the piss here or is that a realistic goal?

NB: He was exaggerating. Ryan would never do more than 210km in a week!

RT: Was Ben St Lawrence’s 10,000m Australian record the highlight of the year for you?

NB: That was a great race as both he and Bobby Curtis who had been training together beat a lot of quality runners. It was a good night as Eloise also qualified there. But 2011 was always about trying to get as many people qualified for London as we could. All up counting Bobby Curtis (USA) and Adrian Blincoe (NZ) there are 9 people in my group with the A standard this year. I had hoped at least 3 more would have done that by now so they could all be going into the Olympic year without having to worry about chasing that and focus more on preparing for the Games. But with that as the main target for 2011, every time an athlete ran the A standard was a highlight.

RT: A lot gets discussed/argued amongst athletes and coaches around the country about just how much speed work your athletes do. Can you provide details on how you build speed up in guys like Riseley and Gregson whilst maintaining their aerobic engines?

NB: Well they are naturally quite fast guys and they remain fast by running fast regularly. There is nothing about building aerobic endurance that erodes speed. Mo looked pretty quick in the last lap in Daegu didn’t he? People lose their speed if they don’t practice it. So while we focus heavily on building aerobic endurance, the athletes also regularly work on their speed by running fast.

RT: What do you think about the new world record rule for women’s road running?

NB: I think there are plenty other women world records that have been aided by much more than male pacemakers that we should be cleaning up first.

RT: Up and comers to watch out for?

NB: Jordy Williamsz can improve a lot in 2012 and Brett Robinson will be going quietly as he does but he will also run a lot better next year. I also hope a couple of the super talents we have known about for a while can stay healthy next year and start to string some performances together – people like Alex Rowe and Emily Brichacek.