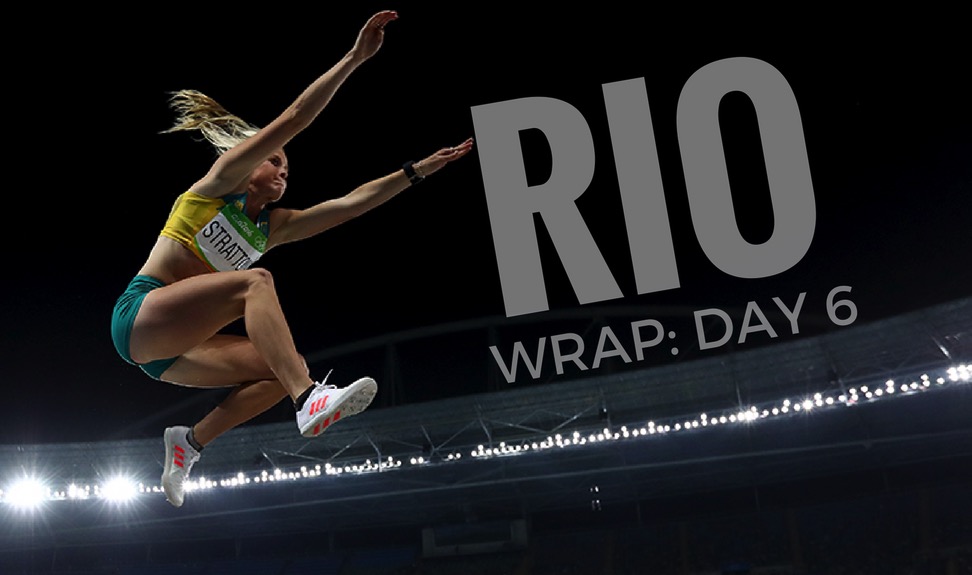 At 23 years of age, Brooke Stratton (Vic) has sailed into seventh place in the final of the women’s long jump at her debut Olympics Games.

After a foul on her first jump, Stratton cemented her spot in the top eight with a second round jump of 6.69m. Stratton further improved her distance to 6.74m in the fourth round to sit in sixth place. Despite two more solid efforts, she was unable to increase on this distance, and finished the competition in seventh position.

The Nunawading Athletic Club athlete who is coached by her father Russell, won her first state gold medal in the long jump in Little Athletics under 9s competition, and has made a rapid ascent through the junior ranks since. Stratton made her first senior international team in Beijing in 2015, where she missed making the final by one spot. A fifth place finish at the world indoor championships, and a 7.05m Australian record jump earlier this year suddenly escalated the youngster as a potential medal contender in Rio.

But that was not to be today, with a 7.17m jump by American Tianna Bartoletta handing her the gold medal, and 7.08m the distance required to reach the podium.

The Victorian was satisfied with her effort, knowing she gave it everything she had, and also optimistic about her future.

“I would have liked to jump a little bit better but I gave everything I had in me and 6.74m was the best I could do,” Stratton said.

“I would have had to jump a personal best to medal. I’ve only gone over seven metres once, so I can’t expect to do that every time.

“I’m only 23 so hopefully I will be at the next Olympics, and I definitely know there’s more to come.”

We know this is just the start of the Brooke Stratton story.

Our distance runners continue to shine on the track, with three Australian 5000m participants, all Olympic debutants, producing strong runs in hot conditions. Though it was Victorian Brett Robinson (Vic) who finished 9thto progress to the 15-man final in 13:22.81.

“That was the perfect pace for me,” an elated Robinson said after the race.

“Any slower and I don’t quite have the kick but if everyone’s a bit tired I can keep up and finish pretty well.

“I’ve had a good six weeks leading into this so I knew I was in good shape,” Robinson said.

The 24-year-old has had an extensive international career for someone so young, previously representing Australia at world juniors, world cross country and two world championships including Moscow in 2013 where he made the 5000m final. He is now the first Australian male in an Olympic 5000m final since Craig Mottram in Athens in 2004, and with three Australian women into the 5000m final, we have some great races to look forward to.

Robinson is not daunted by the final, which for the first time since 1980 will not include any Kenyan athlete.

“You just have to keep up as long as you can and hopefully have a good day and anything can happen,” he said.

Patrick Tiernan (Qld) gave himself every chance in the same heat, by taking the lead and pushing the pace throughout, but just faded in the final laps to finish 13th in 13:28.48.

In the earlier heat, 24-year-old national champion Sam McEntee (Vic), who came into the Games in career best form, was impacted by the slower race pace, but ran well to finish 18th in his heat with 13:50.55.

In the decathlon, Cedric Dubler (Qld) sits in 12th place at the end of day one on 4219 points, after some mixed results that saw him improve with each event. Dubler, who is an avid social media user, has been keeping his fans updated with real time insights on Facebook with assistance from his brother. Here is how he saw his day one competition unfold.

Just three Australians are in action for tonight’s television viewing of the morning session in Rio.

Cedric Dubler (Qld) continues on day two on the decathlon with the 110m hurdles, discus and pole vault on the morning program.

‘The colossus of Corio’ Damien Birkenhead (Vic) launches in the men’s shot put qualifying round with the final in the evening session. The big man threw a PB of 21.21m in Hobart in February to sit at number two on the Australian all-time list, behind his coach Scott Martin. Birkenhead will aim to be our first finalist since Queenslander Justin Anlezark finished 6th at Olympia at the Athens Games in 2004.

Leongatha’s Eleanor Patterson (Vic) will be aiming for the automatic qualifying height in the women’s high jumpqualification. Patterson made the final of the world championships last year finishing eighth. The 20-year-old is a former world youth champion and reigning Commonwealth champion.

If he survives the qualifying, Damien Birkenhead will return for the first final of the evening session in the shot put.

Cedric Dubler completes the last two events in the decathlon – javelin and 1500m. The 21-year-old has been working on his 1500m so is hoping for a big finale, in search of a top ten finish.

The semis of the men’s 1500m will be a cutthroat affair and the in-form Ryan Gregson will have Australia on their feet, willing him home with that trademark finishing kick.

Gregson’s best of 3:31.06 from 2010 stands as the Australian record, and his recent form certainly suggests he is back in PB shape. After his first round run, Gregson alluded to the challenges that have impacted him in recent years.

“I’ve been through a lot of setbacks the last 5 years. I don’t really talk about it so no-one really knows it’s been going on. But I just put my head down and had faith that I have another opportunity.”

That opportunity is now here, and Gregson has his sights set firmly on making the final in his second Olympic Games.

Australia has a proud history in this event, dating back to Edwin Flack winning gold in Athens in 1896 and the great Herb Elliot emulating this feat in Rome in 1960. Despite this, we haven’t had a finalist for 40 years, sinceGraham Crouch in 1976. Will 2016 be the year?

The women’s javelin qualifying yesterday delivered highlights and lowlights, and of the Special K’s as they are affectionately known – Kim Mickle (WA), Kathryn Mitchell (Vic) and Kelsey-Lee Roberts (ACT), it was only Mitchell who progressed to the women’s javelin final.

This is Mitchell’s second consecutive Olympic javelin final, an achievement only matched by Louise McPaul (1992 and 1996 where she won silver).

I’m in good shape and have been throwing well all year. I needed to be in the final and I’m there, so a new competition starts on Thursday (Rio time),” Mitchell said after qualifying.