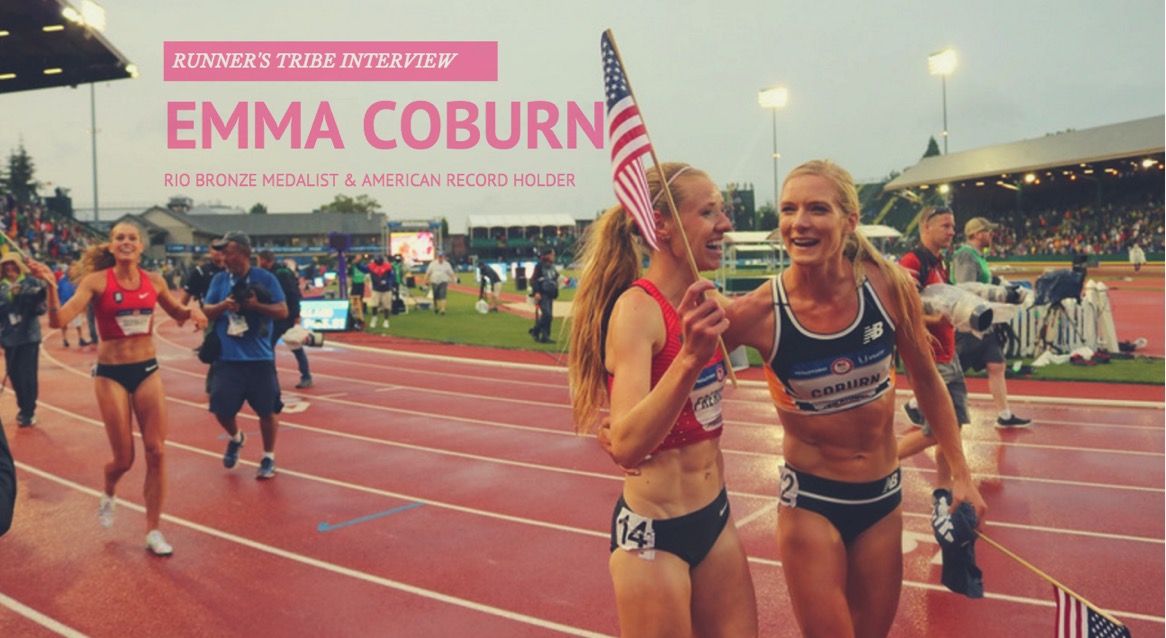 In Rio Emma Coburn became the first American woman to win an Olympic medal in the 3,000-meter steeplechase, earning bronze along with the new American Record of 9:07.63. Runner’s Tribe caught up with Emma for this chat after she recently arrived back in Colorado.

In hindsight, what did this dream-like performance in Rio mean to you?

It’s so incredible looking back on the whole experience. At some level, it’s a symbol of the hard work I put in and also the hard work of my coaches and training partners and family and boyfriend. It really does take a village to achieve something like that, so it just means a lot to me, not only in my own career and my life but all the hard work other people have put in like my doctors and physical therapists and massage therapist and the all the people who have helped me get there. So it’s great, and I’ve only been home for about 36 hours so everything hasn’t quite calmed down yet.

Wow!! OLYMPIC BRONZE MEDALIST! I cannot put into words how much this means to me and how much your support has helped. I never dreamed that this moment was possible. Thank you to everyone who helped make it happen. You know who you are ❤️. So grateful. My heart is full. 🇺🇸🇺🇸🇺🇸

So what have been some of the immediate life changes since Rio?

There hasn’t been anything super crazy. It’s just that every single person you’ve ever interacted with is just happy for you and is congratulating you. I’m so lucky. For example, just this morning I went to the coffee shop in my neighbourhood and the baristas there were congratulating me and were so excited. It’s just little things like that, you just don’t realise the impact you have in your community or within the track world until something big like this happens. And then it happens, and you get kind messages from so many people all over the world, but especially within the track world and especially within my community in Colorado. So the most impactful short term thing has just been people who have reached out and have been kind to me and congratulate me.

Seeing yourself running in the middle of Times Square 😱 pic.twitter.com/cbeQyZmwwf

With this in hand, how much are you looking forward to going for another medal in Tokyo 2020? Have you thought about it?

Obviously, I hope to be in Tokyo, and I hope to be in 2024 also and maybe beyond that as well. I have dreams of many more Olympics ahead of me, but honestly, the first thing in my head is the World Championships and how I’m going to get a medal in London and realising that 9:07 isn’t going to be a reliable third place anymore.

I have to continue to press, improve, and PR if I want to be in the medal conversation.

So although Tokyo is a goal, I’m much more focused on the short-term and London 2017.

Getting some work done here in Paris! (Hurdles are my cheap thrills 😜) #work #cheapthrills #steeplechase

Obviously, you were building and preparing for the Olympics for some time. What were the key things you and your team have worked on over the years that were essential in your recent outstanding success?

I’ve had a very similar training regiment since I started school at the University of Colorado in the Fall of 2008, so for the last 8 years nothing in my training has changed, It just gets a little bit harder every year.

The recipe is the same, but it just gets tuned up and cranked up a little bit more every year.

So nothing in my actual running training has changed, but I think one thing that happened a year ago, I was pretty hurt at the end of 2015 and couldn’t really consistently run until about March. I’d be able to run for about 5 days and then have to take 2 or 3 days off with an Achilles injury. So the biggest difference is that around November/December I was in a pretty regimented strength and rehab program. I felt the freshest and definitely felt the strongest I have at the end of the year, so I’ll definitely have to continue that. I did a week of absolutely nothing, just resting, binging on whatever junk food I felt like. So today I’ve started up on my rehab routine because I know how important it is.

You definitely deserve to enjoy a rest and some junk food. A few random questions to finish off with. Do you think you may give the marathon a shot one day?

Haha, I don’t know. My friend Kara Goucher is the queen of marathons and has done remarkably well and I’ve witnessed her training in the last 3 years when’s she’s been back in Boulder and it’s tough. You kind of need to have a different mental toughness to be successful in the marathon. So I’ll never say never, but just seeing her training and how challenging it is and the races are, it’s not on my bucket list.

Thank you for all your positive thoughts!! SHE DID IT! Bronze and a new American Record!! So proud of you @emmacoburn! ❤️🇺🇸❤️🇺🇸❤️

Growing up who were your sporting idols?

I played a lot of different sports as a kid and wasn’t really dedicated to track and field till my last few years of high school. When I was about 16, I really started taking it seriously. Prior to that, I played basketball, volleyball, ice hockey and skied and snowboarded. So my first athletics idol was actually the 1980 US winter Olympic team as I was a hockey player. I idolised that team although I was born in 1990 I was always fascinated with that story and that team. I wrote fan mail to the players and had their posters in my room, so yes they were my first sports idol. At that time I hadn’t envisaged myself as an Olympic athlete, I just thought their story was incredible and they inspired me to seek the best of myself and to be a good athlete but it never clicked that I’d actually be like them and be an Olympic athlete.

Well, we know that you’re now a lot of people’s sporting idol. Final question and we have to go here. Do you have any plans on making it out to Australia any time soon, maybe a visit with Gen LaCaze to get away from the winter in Colorado?

Maybe, I enjoy seeing Gen as it’s always fun to see a familiar face on the circuit. She and I were lined up in the tunnel before the Olympic final under the bleachers, in the call room. We were talking a lot before the race and it was really nice to have a familiar face and a friend to just take a little bit of the edge off and not be stressing by yourself. So yes Gen is a friend, but I don’t have any plans on going to Australia, but the winter in Colorado can be a little challenging, I’m sure in the coming seasons, if the schedule allows, I’ll escape the weather to Australia or New Zealand just to take a little vacation.

Last night we raced in Zurich. Tonight I’m in NYC getting ready for another race 🙂 My last steeple of the year was pretty good. I didn’t run as fast as I would have liked but I finished in third, again just behind the gold and silver medalists from Rio. It’s always good to be consistent 😋. I’m proud of my steeple season! It’s always fun lining up with these ladies. Such strong years from everyone and they are always fun to be around, funny and kind. @steph_steeples @gengen_lacaze @aishapraught @steeple_squigs #steeplepeople

Well, we’ll be happy to roll out the red carpet for you anytime. You’re doing awesome things for the sport. Thank you so much for your time and all the best. Cheers!