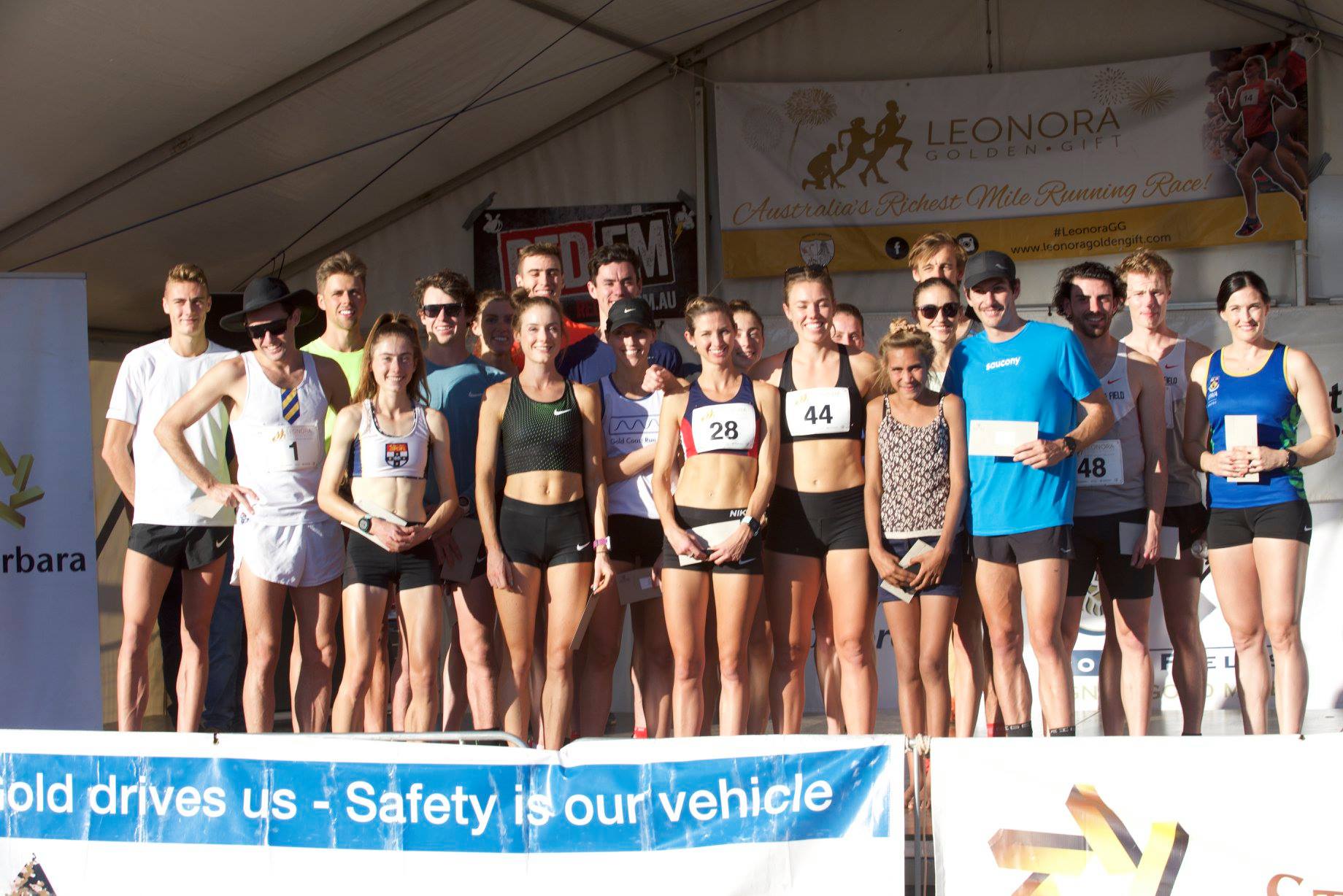 Over its 17-year history the Golden Gift has seen over 20 Olympians compete, running up and down the main street of Leonora, making it one of the nation’s most iconic running events. The event is not only a means of entertainment for the locals and visitors but also a means of inspiration for the youth of the region to witness Australia’s greatest runners competing.

Since 2012, local indigenous participation in all events has increased significantly, and the search is on to identify some future champions. The Gift educates and inspires, and through the implementation of local youth coaching programs, we hope many talented youth will develop a passion for athletics.

In 2003, with the help of Raf Baugh and the Shire of Leonora, the Leonora Mile began (one day to become the Leonora Golden Gift). Initially a small race offering $1000 for 1st place, it grew into a weekend carnival with Australia’s top middle-distance runners vying for a cut of the $50,000+ prize pool. The majority of the elite runners had never visited or competed in an isolated mining town like Leonora before and were keen to explore the town and surrounds to gain the full benefit of their stay. The geographical location of Leonora, lends itself to highlight the unique characteristics of the gold rush town and Northern Goldfields region.

Numerous elite middle-distance athletes have used the prize money to help launch international campaigns. Among these is the currently in form and Leonora crowd favourite, Peter Bol. Bol was the 2016 champion and went on to compete in the Rio Olympics after posting a qualifier in Europe.

Now 17 years since the Leonora Mile was first run, it has grown to a full weekend carnival, the Leonora Golden Gift, now known as Australia’s Outback Mile.

The race is a testament to the vision of its founders, according to former Leonora Shire president Graham Dawes.

“At the end of the day we’d had a few beers at the pub, talking about what we were going to do the following year and I started thinking about it and I said to Raf, ‘can you get some athletes to come from around the country, instead of just having some local blokes from the mine site and all that’,” Mr Dawes told the Kalgoorlie Miner.

And so, the Gift was born. Australian distance running legend Steve Moneghetti was signed on as patron and elite athletes travelled from around the country to race down the main street of a town in the middle of nowhere.

Leonora is a small outback town in the Goldfields-Esperance region of Western Australia, located 833 kilometres northeast of the state capital, Perth, and 237 kilometres north of the city of Kalgoorlie. The town has a community mix of indigenous, miners and pastoralists.

It has a rich outback history and heritage, from the old-world grandeur of the legendary State Hotel, to the charm of iron and hessian miners’ cottages in the eerie gold rush ghost town of neighbouring Gwalia as well as the Hoover House set next to the famous Gwalia mine. The Gwalia mine is the cornerstone of Leonora operations with 1.9 million ounces of gold in reserves. The mine was originally established in 1897 by Herbert Hoover, who later became the 31st President of the United States.

The weekend carnival has grown and now hosts dirt track horse racing, fireworks, market stalls, bands and family entertainment along with a full athletics carnival for all ages.

Last year’s event manager Gavin Prime said the event was the product of months of hard work for the local community.

“There was always the aspiration to make the athletics event something the community and visitors could look forward to every year, but it has become something of a festival now, a collaboration of events and activities that appeals to a wide range,” he said.

“Our little community now swells to up to 4000 people on the event weekend, it’s quite astonishing.”

Held on the WA Day long weekend, June 1-2 this year, the Leonora Golden Gift is a unique experience not to be missed and this year is set to be the best ever.

STAY TUNED FOR A FEATURE SERIES ON ONE OF AUSTRALIA’S MOST ICONIC RACES, THE LEONORA GOLDEN GIFT BY RUNNER’S TRIBE JOURNALIST AND PARALYMPIC SENSATION JARYD CLIFFORD.

Exerts of this article are taken from the Australian Athlete article in edition 1. To purchase this and or the latest edition please visit https://australianathlete.org/