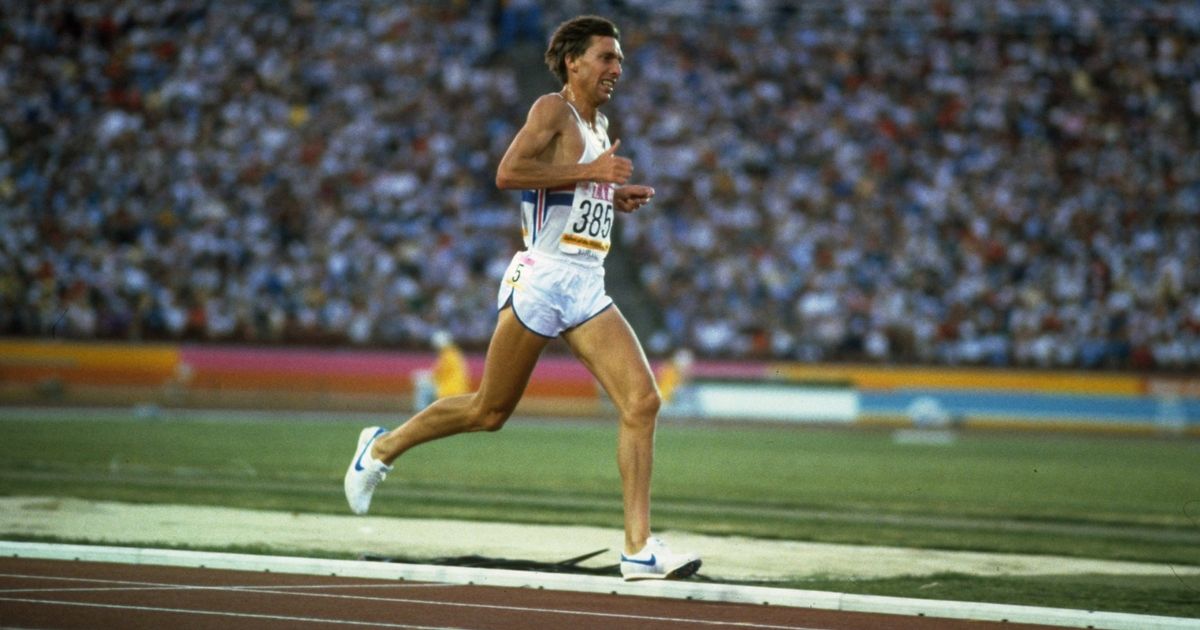 Thursday this week (7/7) was the 40th anniversary of one of the great distance running world records of the 1980s – Dave Moorcroft’s 5000m world record set at Oslo’s Bislett Stadium in Norway.

Moorcroft was the ‘Fourth Beatle’ of the great British middle distance runners of the early ‘80s, alongside Sebastian Coe, Steve Ovett and Steve Cram and this incredible performance was the highlight of a great career. He ran a virtually solo 13.00.41, smashing Henry Rono’s world record by 5.79 seconds and came agonizingly close to breaking 13 minutes. Moorcroft had been a world-class athlete for several years, though was hampered with numerous injuries and his story is one of triumph over many setbacks. First, a brief background to Moorcroft’s monumental achievement.

David Robert Moorcroft was born in Coventry in 1953 and took up athletics at 11, encouraged by his father Robert and he began to show promise as a distance runner, when he ran 4.04 for 1500m at 16.

Meeting Scottish coach John Anderson was a turning point for Moorcroft. Anderson instilled confidence in the young athlete and encouraged him to aim for the top. The gruff, no-nonsense Glaswegian stood in stark contrast to the affable and engaging Moorcroft, yet the two men eventually developed a very close relationship. After corresponding with Anderson for some time, Anderson eventually moved to England and soon had Moorcroft increase both the volume and intensity of his training.

The training soon paid dividends, with Moorcroft taking out the 1971 AAA junior 1500m title. In 1975, he broke 4 minutes in the mile and dabbled in the 5000m, running 14.06 while studying at Loughborough University (also the alma mater of one Sebastian Coe).

Moorcroft soon moved into the big time, gaining a spot on the British Olympic team for Montreal 1976. The 23-year-old excelled in his first Games, making the 1500m final. He led early but was found wanting for pace over the last 250m, finishing 7th in 3.40.94.

The next year (1977), Moorcroft was injured, but was in great form in 1978, narrowly winning the Commonwealth title from Filbert Bayi (TAN) in the fastest time of the year (3.35.5). He backed it up with a European Championship bronze, behind a dominant Ovett and a fast-finishing Eamonn Coghlan (IRE).

Moorcroft began to consider a move to 5000m after a 13.30.33 performance in 1979. That year, he ran a PB (3.54.35) behind Coe’s world record (3.48.95) in the Oslo Golden Mile but was disappointed to finish 9th. He was beginning to suffer from calf problems that would plague him for the next couple of years. He lost some training but recovered to qualify for the Moscow Olympics in Moscow in 1980. With a 2 mile PB (8.18.6) before the Games, he was confident of his chances. Moorcroft was however the victim of more bad luck, contracting a stomach virus in the Olympic Village and he was run out in his semi.

There was some solid form from Moorcroft in 1981, running an impressive 4th in the National Cross Country and a 13.20.51 5000m. He also had surgery to deal with the compartmental syndrome from which he had suffered, and he was able to run again by the end of the year.

The year 1982 was a special one for Moorcroft. In January, he travelled to New Zealand (his wife Linda’s homeland) and enjoyed a very solid couple of months of training and racing in the Antipodes and he went back home in phenomenal condition. He ran another 4th in the National Cross Country and also smashed the long stage (5.6 miles) course record at the National Road Relays.

Moorcroft gave a hint of what was to come 10 days before his phenomenal 5000m, when he ran 3rd  behind Americans Steve Scott and Sydney Maree in the Oslo Dream mile, running 3.49.34.

The big night arrived. Back in the Norwegian capital, Moorcroft was ready for the performance of a lifetime. Moorcroft’s goal was to break the British record of Brendan Foster (13.14.6). He had hoped for a fast early pace from the Kenyans Henry Rono and Peter Koech. However, the Kenyans had run a fast 5000m the night before in Stockholm and were both off the pace from the gun.

Moorcroft charged up the back straight, with the huge crowd urging him on. He was hurting, but he kicked hard around the final bend and into the straight. Moorcroft drove through the line and stopped the clock at 13.00.41, just missing out on an historic sub-13 minute 5000m. He had run the last 1000m in 2.31.8 and the last lap in around 58.5.

The Englishman left nothing on the track and was absolutely spent. He collapsed into the arms of officials and everyone in the historic Bislett stadium realized they had witnessed something very special. The race was not carried live by the BBC, as it was held during the football World Cup, but Brendan Foster was in the studio watching a live feed of the race and quickly relayed the news to Linda, who then called her father-in-law. Robert Moorcroft was officiating at a Coventry Godiva club night and rushed to the PA to announce the news to Dave’s clubmates, who were, of course, ecstatic.

The record lasted three years before just barely being beaten by Said Aouita of Morrocco by the barest of margins (0.01). It remained a British record for 28 years before Mo Farah ran 12.57.94 in 2010. A full four decades later, Moorcroft’s time would still rank just outside the world top ten.

Moorcroft returned to England with a hero’s welcome. He had emerged from the shadow of his illustrious countrymen Coe and Ovett and the record elevated the 29-year-old from a well- respected, world-class athlete to a global superstar.

At London’s Crystal Palace ten days later, Moorcroft produced another brilliant run. He beat the likes of Maree, Walker, Scott, Wessinghage and Ovett in a specially arranged 3000m race, leading from halfway, being briefly passed by Maree in the back straight, before kicking home to victory in front of a rapturous crowd. He ran a European record of 7.32.79, was within 0.69 of Rono’s record and his time was a national record, before being beaten by Farah in 2016.

Moorcroft subsequently ran PBs at 800m (1.46.64), 1500m (3.33.79), 2000m (5.02.89) and 2 miles (8.16.75) and went into the European Championships in Athens as a huge favourite. He was perhaps a little over-raced and looked flat in the 5000m final. He ran a poor tactical race, becoming boxed with 450m to go. He chased eventual winner Thomas Wessinghage to no avail and was pipped by East German Werner Schildhauer, winning the bronze medal in 13.30.42. Moorcroft came back with a vengeance to round out the year with a dominant win over countryman Nick Rose at the Commonwealth Games in Brisbane, winning easily in 13.33.00.

Missing the 1983 season due to injury, Moorcroft came to the 1984 Olympics in LA in great form. He had run a 3.50.95 mile prior to the Games and looked good in the heat and semi of the 5000m. Moorcroft was unfortunately suffering from problems with his groin and pelvis, which were exacerbated by the tough preliminary rounds and he eventually finished last in the final in 14.16.61, behind Aouita, who smashed Brendan Foster’s Olympic record with a time of 13.05.59.

Moorcroft eventually recovered some months later, yet failed to recapture his form from his glory years. However, as his career wound down, he managed run some great races well into his 30s. He ran a PB over 2000m (5.02.86) at 33 and won the UK title over 3000m (7.50.76) in 1989 at 36. Still running well in the early 90s, he took on one final big career challenge: an attempt to become the first man over 40 to run a sub 4 minute mile. Aided by Aussie champion Jamie Harrison (who spent some years early in his medical career in the UK), Moorcroft built back to peak fitness and was sharp going into the race in Northern Ireland on the 19th of June, 1993. Two of Moorcroft’s celebrated contemporaries – John Walker and Eamonn Coghlan – had recently fallen short in their sub-4 attempts (Walker became injured and Coghlan was just outside the mark). Moorcroft felt he was in the form to break 4 minutes but fell off the pace and was just outside the mark, though he ran a new outdoor world M40 record of 4.02.53. Coghlan eventually ran 3.58.15 indoors the following year.

Moorcroft was CEO of the Coventry Sports Foundation for 14 years in the ‘80s and ‘90s and took on the challenging role of CEO of UK Athletics in 1997. The organization was, at the time, a complete financial basket case, though Moorcroft’s team was able to turn things around. Through judicious use of resources, the acquisition of sponsorships and some funding from the National Lottery, the organization became financially viable. New television deals were signed, and UK Athletics secured the rights to stage a number of major championships in the new millennium. New training tracks were built – indoor and outdoor – and this investment of money and resources has paid dividends. The club system continues to thrive, and Britain has again become a major global player in the sport, though the nation’s athletes are not quite as dominant as in the heyday of the ‘80s and ‘90s.