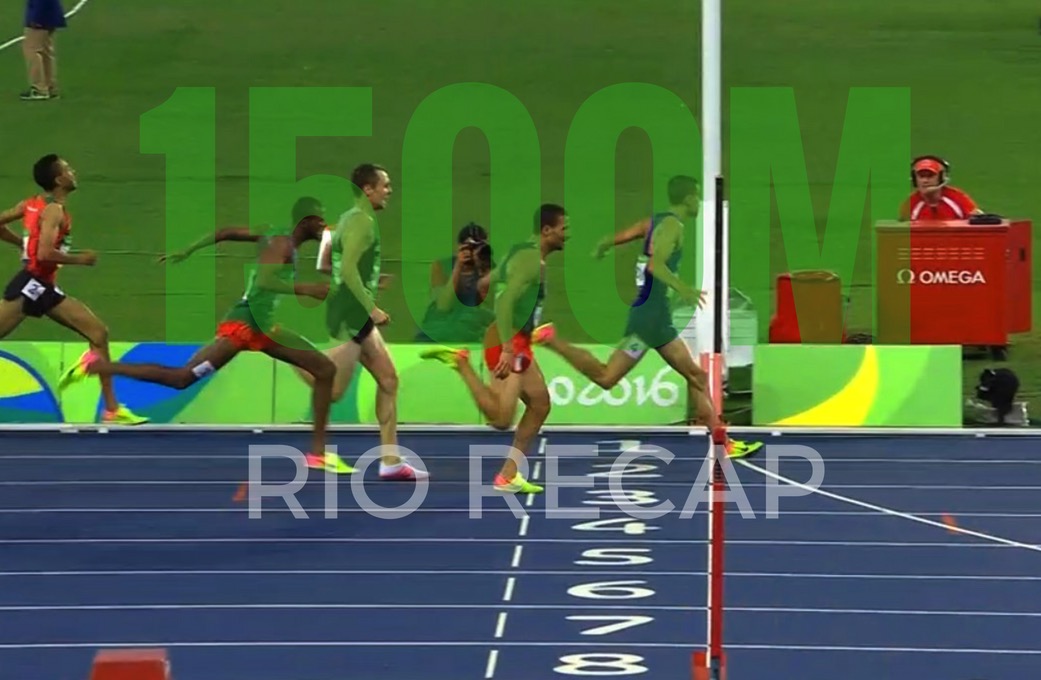 Matthew Centrowitz couldn’t help but boisterously celebrate America’s first Olympic gold medal over 1500 meters since 1908. Running on the inside of lane one the entire way, Centrowitz avoided the heavy jostling and bumping that derailed Kenya’s Asbel Kiprop and many others in the field. Centrowitz’s winning mark of 3:50.00 was the slowest since 1932, explaining the tactical affair.

Leading the entire field through 400 meters in 66.83 and 800m in 2:16.59, Centrowitz maintained his position at the pole while Kiprop and reigning Olympic gold medalist Taoufik Makhloufi of Algeria sat far back. Laser focused, the Nike Oregon Project athlete slowly but surely began to step on the gas pedal.

When Kenya’s Ronald Kwemoi tripped and fell around halfway, everyone seemed to increase their tempo a notch, though the pace was still comfortably quick. At the bell, the octave increased in dramatic fashion: Djibouti’s Ayanleh Souleiman tripped ever so slightly, Kiprop and Makhloufi exchanged shoves, all the while Centrowitz calmly led the field in first. Positioning was do or die, and Centrowitz was in the absolute best spot.

With 250m to go, Centrowitz still kept the lead and began unleashing the breathtaking speed that helped him win World Indoor gold earlier this year. No once could overtake the former Oregon Duck in the stretch thanks to his 50.62 final lap. The gold was Centrowitz’s, sending a bit of a shockwave through the field. Centrowitz himself was stunned.

“I don’t think there’s any achievement in this sport that tops that. No world record, no medal — the Olympics is the pinnacle of track and field. This is the best it gets,” he told USATF. “I’ve been joking since [I won], I’ve gotten this medal that I donít have to do anything for the rest of my career. Itís not a complete failure. It has not sunk in and itís a dream come true.”

“I don’t think it’s sunk in yet. The last hour or so has been unbelievable. I’ve had an email from Jim Ryun coming into the race just wishing me good luck. Seb Coe gave me the medal. [Mile world record holder Hicham] El Guerrouj is back there wishing me luck before the race. Everything leading up to it, during and after has just been surreal,” Centrowitz said.

“I’m a confident guy, but I donít know that I was this confident. I’ve [got] a lot of respect for everyone in that field, itís an Olympic final. I treated every round as if it was the final,” he said. “Never took anything for granted. Kiprop is one of the greatest milers in the history of the 1500. These guys were ready. I thought on the best day I could get a silver medal. In the back of my head I thought I could get a gold. Coming away with a gold, again, is unbelievable.”

Australian Ryan Gregson survived a tactical affair in the men’s 1500m final, to run home strongly in ninth in 3:51.39. In a physical battle for position, Ryan’s performance is Australia’s best result in the event since 1976 when Graham Crouch finished eighth at the Montreal Games. @AthsAust

The first 1500m win since 1908…@MattCentrowitz couldn’t even believe it! 🇺🇸

I had to fight doubts 20mins before the final.Thinking of my son watching on tv brought me back to a thankful state of mind

@nickwillis Congratulations on returning to Olympic podium. it’s not easy doing over & over.

What a finish to the men’s 1500m. This was da most exciting event in Rio yet. Congrats @nickwillis gettin Bronze. #Olympics #athletics #NZL

9th in the Olympic Games 1500m final. @RyanGregson25 will walk away hungrier then ever. So proud of what you’ve accomplished #littleking 👑

9th in the Olympic Final was below my expectations. Moment of weakness cost me & there’s no room 4 that here. Thanks 2 everyone in my corner

“Hopefully one day I get another opportunity” – @RyanGregson25. Olympic finalist. More to come! #Rio2016 pic.twitter.com/rVW9ZkZNs5

Heat 1:
Asbel Kiprop gracefully went from back of pack to pole position in the final circuit, coming side by side with Ben Blankenship. The Kenyan was simply too much to handle down the stretch, crossing first in 3:39.73. The final lap of 52.93 didn’t serve to break up the field too much, as a whole clump of seven athletes finished within a second of runner-up Taoufik Makhloufi (3:39.88). Nick Willis nabbed third in 3:39.96, a step up on Blankenship (3:39.99). As he did in the prelims, Willis was patient in the homestretch, not panicking when boxed. One can tell his veteran experience is coming in handy through the rounds. @ChrisLotsbom Race Results Weekly

Mid-pack, there was an awful lot of bumping and jostling. Spain’s David Bustos got forced off the track with a half lap to go, taking multiple steps inside the rail and barely avoiding a fall. As a result of the pushing, Bustos got advanced on to the final.

American Robby Andrews was not as lucky. Trying to pass on the inside with 50m left, Ethiopian Mekonnen Gebremdhin forced Andrews over the rail and onto the infield for two steps. Andrews was subseqently disqualified, though it appeared there was nothing else he could do in the situation. Kenyan Elijah Manangoi was unable to start due to injury. @ChrisLotsbom Race Results Weekly

On the track, 26-year-old Ryan Gregson has stormed his way into the Olympic 1500m final, running a smart and controlled race to finish fourth in 3:40.02 to automatically progress.

Which he did, emphatically with his trademark big kick.

“I’m just trying to be like a Melbourne Cup jockey who’s just patient-patient, waiting for the straight then I get a nice clear run,” Gregson said.

Gregson is the first Australian to make an Olympic 1500m final in 40 years – the event in which our first ever Olympian Edwin Flack won back in 1896. When asked about the long drought since the last Australian finalist, Gregson said, “It has been a long time – it’s a huge achievement I just did then. I realise that.

“If I retire tomorrow, that would be a great career – because I’ve finally made a championship final and I picked the Olympics to do it. I am the Australian record holder so I probably am expected to start making finals – so I’m glad I delivered,” Gregson said.

“Just trying to be like a Melb Cup jockey who’s patient, waiting for the straight to get a clear run” – #LittleKing👑 pic.twitter.com/PU4Z2rCgru

Heat 1 –
The first section was an all-out sprint for the line, as seven men finished within a second of one another. Five men were abreast coming down the stretch, with Asbel Kiprop gaining the slightest edge on Ryan Gregson and Ayanleh Souleiman. Chris O’Hare, Matthew Centrowitz, and Fouad El Kaam completed the automatic qualifiers.         @ChrisLotsbom Race Results Weekly

Ryan Gregson (Vic) looked to be in trouble early during the men’s 1500m heat, where he found himself boxed in and in danger of missing out on progressing to the semi-finals. However, his experience shone through, and the trademark kick of the Victorian nicknamed ‘Little King’ saw him steam home in 2nd place in a time of 3:39.13 to advance to the semis. @AthsAust

Impressive run by @ryangregson25 as he advances to the semi final of the men’s 1500m! #rio2016 #oneteam #athletics

Heat 2 –
A wild finish played out in the final stretch, seeing athletes tangle and one get DQ’d. A day after winning silver in the 800m, Taoufik Makhloufi surged in the last lap to grab the lead, winning the section by the slimmest margin on Elijah Manangoi and by a step on Robby Andrews. But the big action happened behind the top three. With multiple athletes battling for the final automatic qualifier spots, Norway’s Filip Ingebrigtsen tried a bold maneuver, squeezing between Germany’s Homiyu Tesfaye and Britain’s Charlie Grice. Extending his arms, Ingebrigtsen’s contact impacted everyone’s forward momentum; he’d ultimately be DQ’d by referees. Grice got the worst of the exchange, fading to tenth; luckily both he and Tesfaye would advance to the semi-finals after a protest.                          @ChrisLotsbom Race Results Weekly