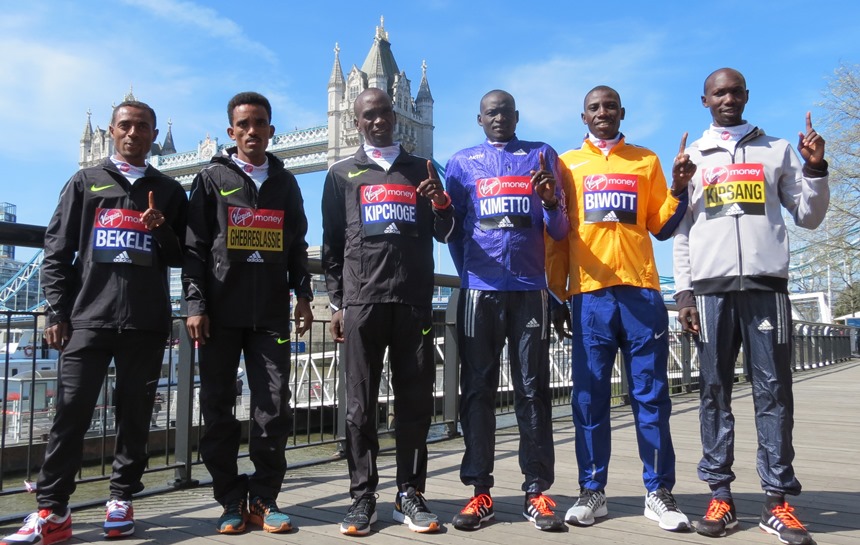 LONDON (20-Apr) — It took only a few minutes into the question and answer portion of today’s Virgin Money London Marathon elite men’s press conference for a reporter to ask the athletes assembled about doping.  Then there was another question, and another. Indeed, the doping theme became so prevalent that the press conference moderator, broadcaster Tim Hutchings, pushed back when an Associated Press reporter continued to ask questions in that vein, prompting a brief, but heated, exchange.

But the athletes, and race director Hugh Brasher, were unfazed.  While they openly admitted that doping was a problem in all of sport, including top level marathoning, they stressed that action was indeed being taken to clean it up, especially among the events of the Abbott World Marathon Majors.

“There is an absolute desire to have a clean sport,” Brasher told reporters.  He continued: “We as an event organizer want that the winners of our event be clean athletes.”

Brasher proceeded to explain that the Abbott World Marathon Majors (AbottWMM) has the most extensive, privately funded drug testing pool in all of Olympic sport.  As of March 1, 68 men and 60 women were in the AbbottWMM drug testing pool which was created in coordination with IAAF.  These athletes will be tested at least six times this year, Brasher said, something that he realized wasn’t widely known by both the media and fans.  This comprehensive and disciplined approach, jointly funded by all six events in the Majors, was already helping to improve the integrity of the sport.

“This is the biggest program in any sport,” Brasher asserted.  “We are determined to have a clean sport and absolutely we believe the public will come out and support everything that is going on on Sunday.”

Wilson Kipsang of Kenya, the 2014 TCS New York City Marathon champion who was the runner-up here last year, asked reporters to consider that doping –like crime– wasn’t necessarily widespread, but rather a more narrow problem caused by a small group of bad actors.  He also said that because he and other top marathoners were being tested often now, both in and out of competition, that their results should be trusted.

“I think there is a wrong suspicion; it is just like crime,” said Kipsang, who won the London Marathon in both 2012 and 2014.  He continued: “Doping or cheating is a problem, it’s a crime.  That doesn’t mean that the whole sport (is a problem).”  He then looked at compatriots Dennis Kimetto, Eliud Kipchoge, and Stanley Biwott seated with him on the stage.  “All the guys, we’ve been tested 7 or 8 times.”

Kipchoge –who won both the London and Berlin Marathons last year, was the #1-ranked marathoner of 2016 by Track & Field News, and won the AbbottWMM Series IX which concluded in Tokyo last February– reminded reporters that the Kenyan Parliament had passed a bill yesterday that authorized the creation of a national anti-doping agency, and which also criminalized doping, with the harshest penalties for those “found guilty of supplying or administering doping products,” Agence France Presse reported.  President Uhuru Kenyatta is expected to sign the bill into law, paving the way for Kenya to compete in the 2016 Olympic Games.  He insisted that Kenya was moving in the right direction.

“For Kenya to be banned is out of the question,” Kipchoge told reporters.  “There is no need to be banned (from the Olympics).” He added: “Now we are set.”

For Sunday’s race, Kipchoge is the fastest man in the field with a 2:04:00 personal best, a time he achieved in last year’s BMW Berlin Marathon despite having the insoles of his racing shoes slide about halfway out.  In addition to his Kenyan rivals, he’ll also face three-time Olympic gold medalist Kenenisa Bekele of Ethiopia and 2015 world champion Ghirmay Ghebreslassie of Eritrea among others  Kipchoge, who won the 5000m world title when he was only 18, said he was ready for the challenge, and that he was training with integrity under coach Patrick Sang.