The Commonwealth Games (CWG) were something that I’ve been looking forward to for years. I was in the crowd when Mottram bravely took 2nd in that 5000m. I was in the crowd when Steffensen won his 400m. I was in the streets when Kerryn McCann went head to head with the Kenyan marathon runner. The 2006 CWG were something else. And it was probably one of the earliest moments where I said, “I want to run at and win one of these things.” Fortunately, in 2018, there was an opportunity for Australians to replicate what happened in 2006, but this time, on the Gold Coast.

Preparations for this started as soon as the London World Championships ended, and I was fortunate enough to have an A qualifier in both the 800m and 1500m. Fast forward to March of 2018, and I had been selected for both events.

From the National Championships until the start of our holding camp, I based myself at the Australian Institute of Sport, with training partners Sam McEntee and Charlie Hunter. We trained incredibly hard in this time, and did everything we could to make sure the CWG were a successful championship.

A week before we entered the village, the Australian team was based at Nudgee for the holding camp. The day after I got there, I raced a 1500m in Brisbane and ran a solid 3:37 – which showed signs I could keep up and kick; everything you want in a race. The next few days saw me complete some key sessions, with some endurance but mostly speed endurance.

With the 800m being first, this was the key focus of the championships. I was up against some stiff competition: Nijel Amos, three solid Kenyans, some incredibly talented Brits, and some good locals from Australia and New Zealand. My work was cut out for me. So, in the days leading up, Elizabeth Mathews devised some key sessions which would ensure I could sprint and get out of the blocks at a good pace. These were all completed at the Runaway Bay sporting complex. With the final key sessions completed, it was time to taper and get ready to race in the packed Carrara stadium. 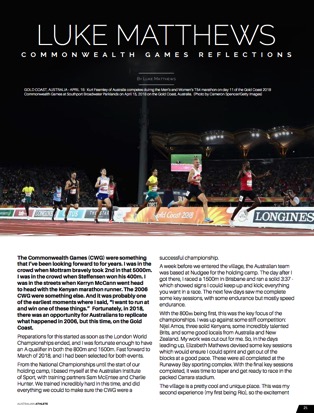