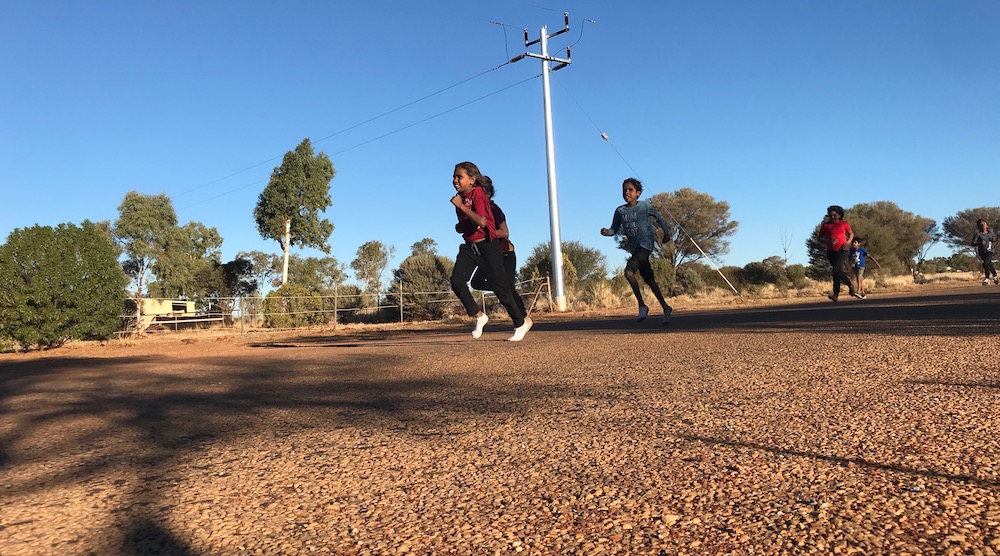 The Leonora Golden Gift kicked off on Thursday in spectacular fashion. Under the guidance of professional running coach Raf Baugh, a record number of local school kids – aged five to eighteen – took part in an athletics clinic preparing them for the weekend’s races. The day proved to be a resounding success, the atmosphere of curiosity and passion fuelled by an infinity of laughter and smiles.

Throughout the day, coaches shared their wisdom on running technique, the mechanics of acceleration and deceleration, as well as a myriad of skills covering all athletics disciplines. Most importantly, the rising stars of Leonora also learnt how to handle the pressure of racing on the big stage. The Golden Gift.

“The big thing out of this is to make the kids feel confident with the Golden Gift. A lot of the time the biggest barrier for getting the local kids involved is not being familiar with traditional athletics,” he said. “A lot of them are naturally very talented, but they’re not used to going through the process of racing. The biggest thing is helping them feel comfortable with that scenario.”

Held annually since 2012, the clinic has welcomed an honour roll of international superstars, including Olympic legends Steve Moneghetti and Rueben Kosgei. Having now taken over the reins, Baugh – working in collaboration with local coaches– is looking to use running as a way of making a difference in the community.

“The biggest satisfaction for me is seeing the kids get some confidence and some more self-belief,” he said. “There is a strong correlation between physical activity and lifetime confidence, education, and health. The research suggests that running is going to help the kids get off to a healthier start in life.”

In its relatively short history, the clinics have already fostered success. At the age of five, local star Kiara Reddingius witnessed her first gift. Those memories remain with her. Over the years, the skills she developed became innate, and today she is one of Australia’s best Heptathletes. Her story reads like a fairy-tale. But one that speaks a truth to what is possible.

“Her story shows that anything is possible,” Baugh said. “The kids definitely have the talent. It’s all about giving them the opportunities that they deserve.”

With a rapid growth in engagement with the clinics, the perception of possibility continues to shift. For Baugh, and all involved, the dream is that one day Leonora will get its very own little athletics club.

“They’re great kids. They have the ability to push themselves and the ability to engage in the class. It’s our job to deliver a service that meets their needs and engages them to feel confident,” he said. “One day I’d love to see a little athletics club in town.”

If this step was ever taken, who knows what might unfold. Spurred on by the stories of their idols, the kids will be given the opportunity to dream. One day there will be another Kiara Reddingius. Maybe one day there might even be another Cathy Freeman.

The weekend has only just begun…