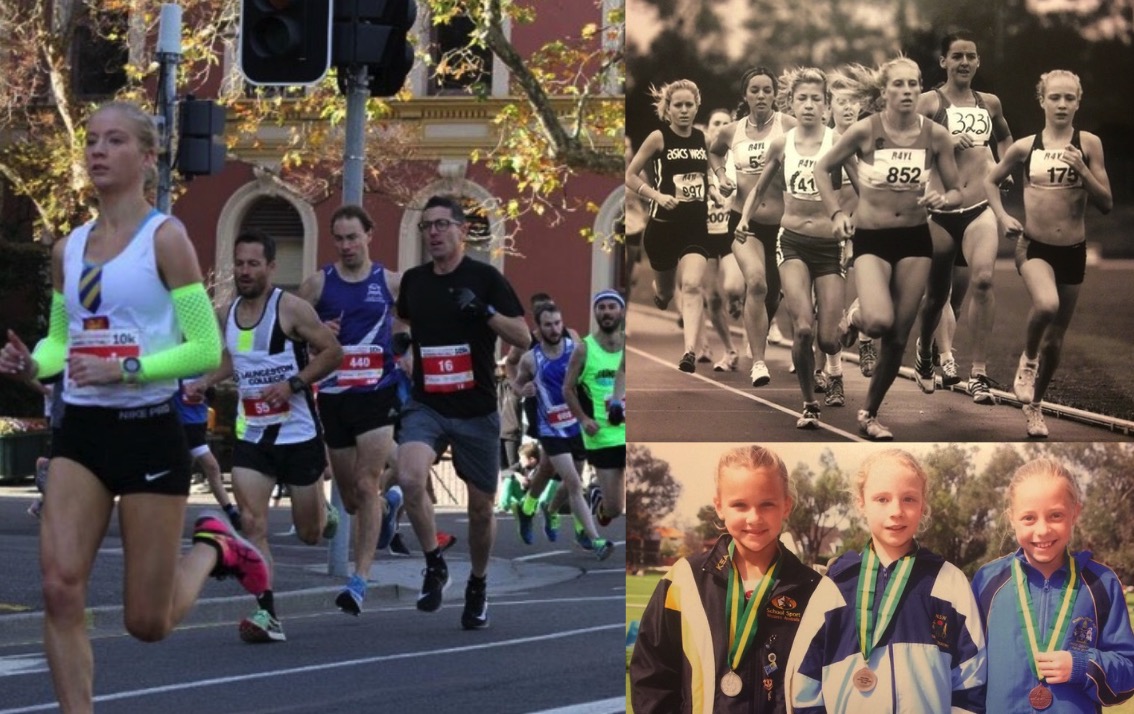 Firstly, massive thanks to Runnerstribe for this opportunity! I currently compete in the 5000m, 10000m & cross country (and occasionally dabble in 1500m and 3000m) for the University of Sydney. I’m also studying a Bachelor of Applied Science (Exercise Physiology).

I enjoyed some success over the winter season, particularly on the road. I continually chipped away at my 10km PB, competing at Sydney 10, Tasmanian Running Festival (Launceston) and Gold Coast 10km. I finished the road season off with a sub-35 10km, and although still learning how to race the distance, I’m very proud of that achievement. I’ve broken my 5km track PB at the halfway point of every 10km race in 2018, which should certainly indicate that I’m long overdue for PB in that event! 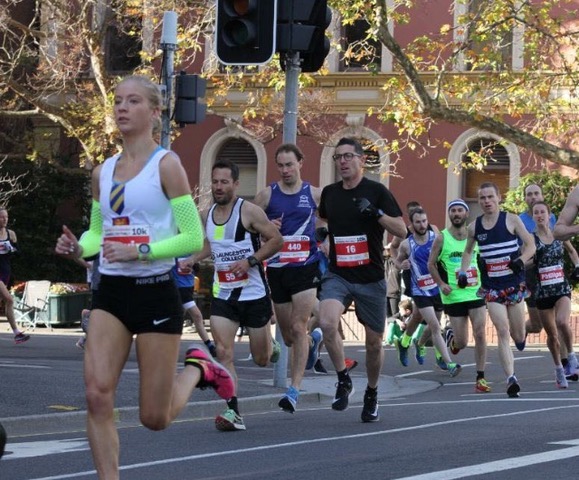 My introduction to athletics was through my older sister (Louise). Louise showed great potential as a runner through school athletics and cross country, and as such, begged my parents to sign her up for Little Athletics. Of course, being the younger sibling, I was dragged along out of convenience for my parents, despite my complete lack of interest. With the 500m pack start the longest on offer, I showed little potential in being a runner, but enjoyed it nonetheless.

A few years later, once my parents stopped trying to enter me in long jump and sprints at little A’s events, I qualified for my first national cross country (2007 – 10yrs). There were no expectations of me to do particularly well at these championships, but I managed to surprise everyone and come away with the win. Although I’d hope winning national cross as a 10 year old isn’t the pinnacle of my career, it remains a fond memory. 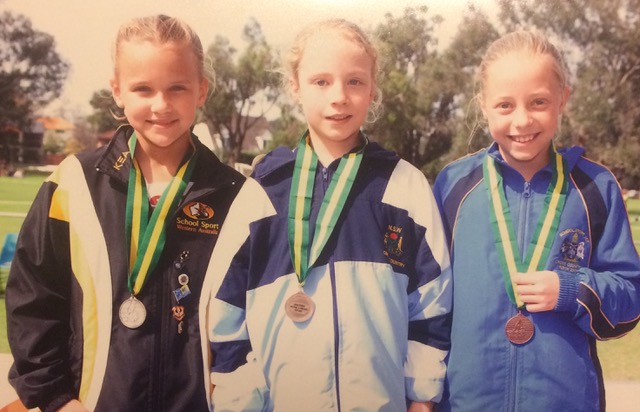 From here, I had continual success throughout primary and early high school, across a variety of distances (800m, 1500m, 3000m & cross country). Dad remained my coach for many years, and I attribute my success (both past and present) to the strong foundation he provided in my formative years. He is very knowledgeable coach, particularly regarding developing young athletes and ensuring their continual participation in the sport. Dad’s key concern was to ensure that I didn’t “burn out” as a junior, thereby ensuring I had ability to choose whether to compete as an open and/or master’s athlete in the future – rather than being “forced out” of the sport due to serious injury or dislike of the sport. I was also a competitive swimmer until around 15yrs, which was highly beneficial in providing me with a strong aerobic base. I unfortunately then struggled with growing related injuries & illnesses from my mid-teens, but always took a slow and conservative approach to returning to training/competition. 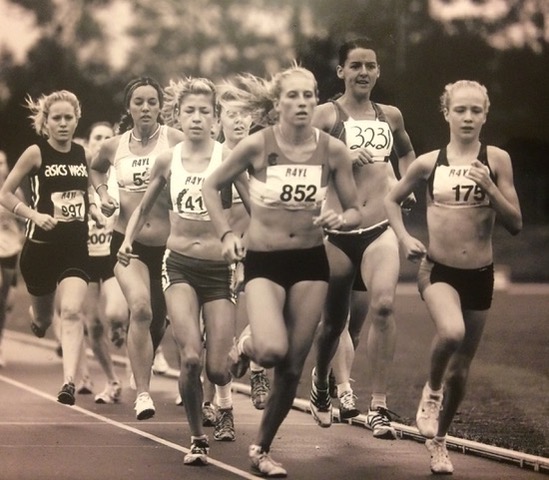 Fast forward to the present – I’m based in Sydney, training with James Fitzgerald (affectionately known as “Jimbo”).  Jimbo has years of experience in the sport, coaching for longer than I’ve been alive! We have a really strong group of junior and senior athletes, and I’m excited to see how the squad will progress over the coming years. Training alongside athletes of high calibre, such as Jenny Blundell (Rio 2016 Olympian), has been great for my confidence. I feel this has allowed me to progress as an athlete, and contributed to my rapid progression over the winter season. My favourite aspect of training with Jimbo is that he loves variety, so it was difficult to narrow down our multitude of sessions to just 4 (you’ll also note that Jimbo is a huge fan of conjuring up creative names for his sessions!):

Our weekday sessions are generally performed on a grass track, with the occasional stint on the tartan for faster work or with inclement weather. With such a diverse squad, focusing on vastly different events, we have no stock standard session. Sessions vary per individual, taking into account where we are in the season. Typically, Tuesdays consist of longer work, whereas the faster intervals comprise the Thursday sessions. Just a few examples of our track sessions include:

These sessions typically start at “thrempo” pace (somewhere between threshold and tempo) and build in to it. Finishing off the last rep quite strong is great at practising the closing stages of the race. Sessions of this nature are great for 5km/10km runners, but are also beneficial in building aerobic base during the winter season for 1500m/3km athletes.

This is easily my favourite session of the week. Saturdays are usually at Parramatta Park or the Brickpit, which is great for me as I get bored of the track very easily. An example of a Saturday session would be CLASSIC COMBOS – a mixture of longer tempo/threshold runs, interspersed with shorter, faster efforts. For example –  12mins, 3x90s, 9mins. A variation of this is SPLIT TEMPO REDUCTION COMBOS – eg. 6mins, 3x60s, 4mins, 5mins, 3x45s, 3mins. I believe the longer efforts are imperative in developing pace judgement and a strong aerobic base. The interjection of speed and a bit of lactic into the legs is prior to a threshold effort is, in my opinion, crucial in aiding the back end of a race when it’s starting to sting.

Whilst Sunday long runs are the bread and butter for every distance runner, I’m still learning to love them. I’ve learnt in the past year that the work you do away from your squad training sessions is just as, if not more, important than your training reps. I have difficulty with high mileage, so I tend to sit at a faster pace for long runs/mid-week runs to account for this – “quality over quantity”.

These runs can become quite tedious. Consequently, to maintain interest, I am heavily reliant on variety and change locations for long run/mid-week runs constantly. I frequent Scheyville National Park, Narrabeen, Homebush, M7/Western Sydney Parklands, and fire trails in the Blue Mountains. Scheyville is great as it’s relatively close to home and completely on grass. This is rare for a long run in Sydney, and as great in mimicking cross country. Fire trails will always be my favourite surface to run on, and the trails up the Blue Mountains are great at keeping you honest! I much prefer to have company on these runs, but I believe there is a place for occasional solo runs in building mental toughness and pace judgement. My favourite running partner is my boyfriend (Joe Burgess), and we often tee up with other athletes such as Taylor John or Jenny Blundell.

I try to run 20km on my long runs, but will stretch it to 22km if I’m feeling good or pull it back to 18km if I’ve had a tough week. My mid-week runs are around 10-15km, usually performed as wind-ups – albeit unintentionally as I’m itching for the run to be over!

Although sometimes a polarising figure among distance runners, I am a firm believer in the benefits of S&C (you’d hope so too, seeing as my degree is reliant on it!). Working on muscle imbalances is imperative in the prevention of injury, and helps to ensure correct biomechanics. The additional strength has aided the back end of my races where I would usually fade, and was certainly helpful in tackling the hills at Melany golf course for national cross country last year! I also find it very enjoyable, and a nice break from slogging out the mileage on the track or trails. I currently train at the high performance gym provided through the Sydney Uni Elite Athlete Program, with Nicolai Morris as my coach.

I hope you’ve found this article somewhat useful! Thanks again to Runnerstribe.