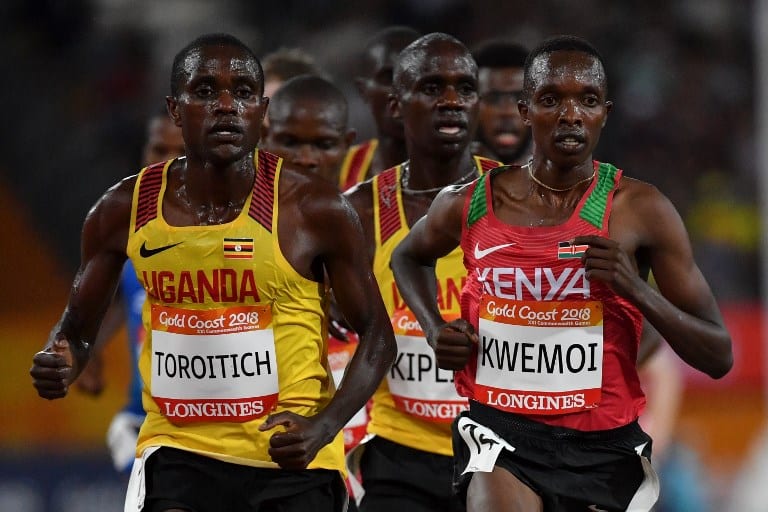 “My target is a podium finish in the marathon and even in the 10,000m at the Tokyo Olympics. I am giving my all in training right now and I am hopeful that all the hard work will reap dividends eventually.” – Rodger Kwemoi

This article was first published by our friends, Enda Sports Wear, republished with permission…

In February, Rodger Kwemoi shocked a very strong field to win the Kenyan Cross country title, booking himself a slot to the African Cross Country Championships.

But for close observers of the sport, Kwemoi wasn’t a new name. He is a 10,000m specialist, he has a Commonwealth bronze medal at the distance. He is a former U20 world champion and in 2019 he finished fourth at the world championships.

The 24 year old finished second in 5000m at the Athletics Kenya’s first track and field meet and told Enda that although the race was very competitive and tough, he was pleased with the outcome. We had a chat with him about the race and more:

Enda: How was it? Is it a race you can compete in again or was it too hot for you?

Kwemoi: This is an event I can compete in especially if I had done proper speedwork on the track, I don’t think I would have been beaten here.

Enda: Which races are you preparing for?

Kwemoi:  I am focused on preparing for the Africa Cross Country which has now been postponed, so now I have placed all my focus on the Olympic Games. That aside, at the moment I don’t have any other race, not even Diamond League.

Kwemoi: Yes, it will be 10,000m in Tokyo. My target for this season is to make it to the Kenyan Team to the Olympics Games and while in Tokyo expect some good performance from me.

Enda: Kwemoi you have changed your running tactics, you are usually a front runner but not anymore

Kwemoi: All the other races that I was competing in, I was running from the front a lot, so you get that when I got to the finishing point, I was always beaten. So the coach advised me to be running from behind, to preserve my energy to get some positive results. It has worked.

Enda: There are cancellation or postponement of races,  are you worried that you won’t compete in enough races before the Olympic games?

Kwemoi: For now, I see races being cancelled but we won’t give up, maybe another race will come along, so as athletes let us keep on training so that we can always be ready for the next race.

Enda: Kenya is looking at you and others in 10,000 in Tokyo to deliver the elusive 10,000m gold medal. Do you feel pressure even before the trials?

Kwemoi: I don’t have any pressure because if we prepare well, I am confident we will deliver that gold medal for Kenya.  All we need is good preparations, which we usually don’t have. What we need now to start early preparations for the 10,000m and the gold will be brought.