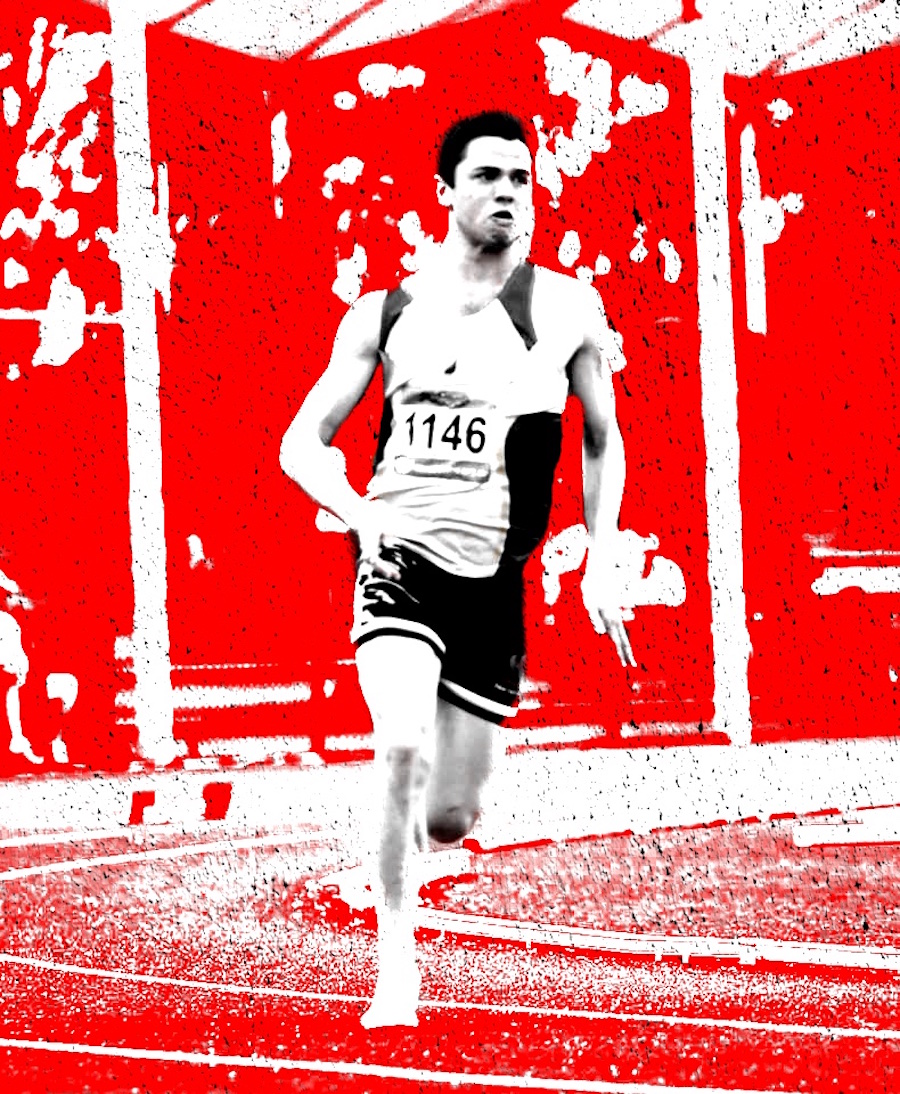 At CAS (Associated Schools of New South Wales, Australia), this year you set a new record in the open 800m with a super fast 1:51.96. Were you expecting to come up with such a big performance and break the previous record set by ex Barker College student, Ben Liddy?

My PB before the start of the school season, which is only 4 weeks before CAS was 1:52.52, so in my head I knew that I had a good chance at the record. I just wasn’t sure exactly what speed I had in my legs coming straight off the back of the cross country session where I was running 8km. At the first invitational I ran a 1:55 so I felt that it would be manageable. As the weeks progressed I felt the speed was returning but I knew for sure when I ran a 1:52.4 the Saturday before CAS that I my body was ready. Obviously I knew any thing could happen during the race or lead up to it so I was praying that nothing would go wrong. When I crossed the line I was both shocked and extremely happy to read 1:51.96.

Barker’s win at the CAS this year was epic. Can you talk us through the wave of emotions you felt on that day?

CAS it is always a very long day. It begins with the team photo and last talk from the coaches in the morning. You feel a little nervous but talking to your mates settles you down and keeps your mind of the races. You start to feel the meaning and importance of CAS as you get announced to the school. I was Athletics Vice Captain this year, so was a little nervous because I was reading the team list out and I didn’t want to get anyone’s name wrong. Then there’s the journey out when people tend to just stick to themselves listening to music. This was just like driving out to any other event, but while you can go to SOPAC 100 or more times, it just feels different at CAS. I’m not sure why, but knowing there will be 6,000 people in the stands heightens the emotions. This is where I was starting to think of my races as I was talking them through with the coaches and managing warm-up times. From then on I just tried to relax in the tent and wait until I needed to warm up.

This is difficult because you feel the need to do something and the crowd is building, but luckily with experience I have been able to control it. My warm up was calm and normal. It was only when I walked down to the track and remembered that this was CAS, that there was a huge group school there with my year 12 mates at the front cheering, that the emotions became very hard to control. I really felt the weight on my shoulders to perform well, and felt a little sick in the stomach, but when the gun went all of that went out the window and It was just like any other race.

During the race I felt really strong and coming into the home straight it was great to see and feel the Barker crowd cheering me home as I was just trying to keep my form (as I felt the lactic building up) and win as it was impossible to gauge how close the other competitors were. When I crossed the line and looked at the clock and saw I ran a 1:51 I felt mixed emotions. The first was hating myself because I still had a 400 and 1500 to do later that night! This quickly changed to joy and happiness knowing I had just broken a older CAS record and had a new PB. At CAS after you finish your first event, and can walk again, you always feel so much relief and can relax.

The next challenge that I was thinking in my head was the mental battle I was going to have in the 1500 because was only 12 minutes after the 400. As I lined up at the start of the 400 it felt amazing when the whole school chanted out my name before going into the blocks. Through the race I could still feel a bit of the 800 in the legs, but luckily came away with the win.

When I was lining up for the 1500 I felt mixed emotions of happiness and sadness as it would be my last race at CAS, just as it had been my first in Year 7. It was a hard last run with the legs struggling to turn over. I made it to the end of the line and knew I did the best I could on the night, and it was now time to start cheering the rest of the team home.

The nerves and excitement were high going into the relays one point over Trinity – willing the boys to get the baton around safely and do well. The last emotion was a sense of relief and excitement when we won the last relay and we knew we had won overall. All the squad spilled onto the track to congratulate the Opens team and they lifted our Captain and me onto their shoulders for a final huge cheer. The day was full of emotions but it was the best day of my life so far.

How did you get into running?

I have enjoyed running since I was little but I started to do some basic training when I was in year 3 and lived in England. I joined the school weekly running club before school where we just ran laps around a couple of ovals. When we moved back to Australia the competition was a lot tougher at Barker, and I wasn’t doing any real type of running training so I didn’t make the school athletics team in year 5 or year 6. In Year 7 I made a decision that I still think is the best decision I have made so far in my life, to do cross country as a winter sport. I went to all the trainings and slowly improved. I wasn’t winning or anything on the weekends but I was enjoying the team atmosphere. When the athletics season came around I was wasn’t quick enough to make the team for 800 but I made the 1500. I had a memorable experience, which involved being accidentally tripped at the 100m mark, and ended up finishing with a broken collar bone and a PB. After that I started to just train by myself, doing runs and session from school. When the next year came around I made massive improvements in cross country and athletics, even winning the U14 800m Championship race at CAS. This led to me wanting to compete at the NSW All Schools where I ended up coming 7tt in the final. A couple of weeks later I went to a Little Athletics JETS clinic which is where I met my coach Lindsay Watson, and it just followed on from there.

What were the major highs and lows with your running journey this year?

At the end of the 2014/15 season I finally got my head together and ran sub 4 for the 15. This led into my final Barker Cross Country season and I was given the honour to captain the team. I had mixed results in the races, but the best thing was making my first NSW Schools Cross Country team to compete at Nationals, which was a goal I had set in Year 8.

Sadly there were a couple of lows in the season in big races. At the CAS vs GPS event I was ranked the 4tth runner for CAS but was carrying a chest infection and was in the throws of late nights completing my Industrial Technology Major Work. CAS lost in the end and I felt a little to blame. The other low was the CAS Cross Country Championships where I was in the middle of HSC trials, still finishing the Major Work and trying to get rid of the sickness. It was just a bad way to finish off School Cross Country individually, but my team were fantastic. The boys who beat me were my teammates so we won the opens team and we drew with Trinity for the overall CAS Championships, which brought up my spirits.

Obviously the most recent high was CAS, with the 800/400 double, a PB and CAS record in the 800 and capping off the night being Vice Captain to the team’s fourth win in a row.

You’ve just finished the HSC, what are your plans now?

Firstly just enjoy life without studying. Next I am getting into good routines with more training and recovery, which has been very nice. So In regards to next year I will wait and see what my HSC results are. I have a couple of plans, one being a degree in Construction Management. Another option is to complete a trade course relevant to construction then go to Uni as a mature age student for the Management piece. These are my ideas but I will just wait and see what my marks are, plus see how the running is going.

Have you explored the option of going to college in the US on an athletics scholarship?

I did look into it, especially as we lived in the States when I was younger and I would enjoy going back, but there were a couple of reasons against it. The first is I really don’t want to leave Lindsay. Secondly whilst I would love to to go over there for the running, I also want to have a relevant education to my future, which is in the construction side of things and was concerned about the relevance of their building codes etc. Another reason was I started looking in to it very late in the piece and my parents had some concerns. I would really love to do an exchange if possible though.

What are you major goals in regards to running?

The major goal I have like anyone young person in sport is to compete at the highest-level possible, so I would love to represent Australia at a championship. That opportunity will come next year with the World Junior Championships in Russia, which will be tough because there are abut 6 people near the qualifier. So I plan to keep working hard, lowering my times and enjoying what I am doing.

Can you talk us through your typical training week?

Now that I have started to watch TV again I would have to say that at the moment it would be The Block.

Click on the link above to find out more about this unique race from Red Bull.