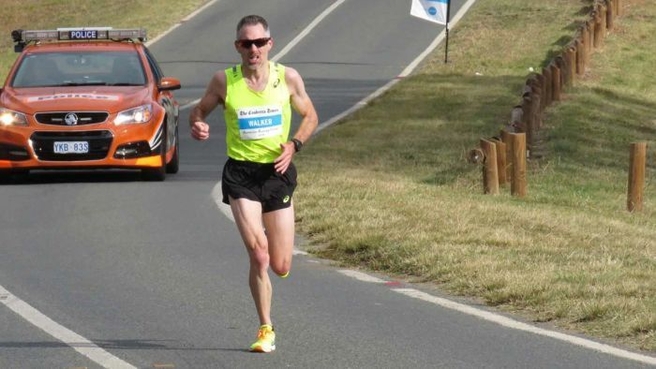 Why do you run?

That’s a question I still ask myself! I guess like a lot of runners I started to improve my fitness, got reasonably fast which in turn motivated me to be the best I could. These days there is an element of habit and the desire to still compete as best I can – even if the focus is now on age-group rather than open.

Rowan you recently just won the Canberra Marathon, are you happy with this terrific performance?

Yes, very happy as it was a little unexpected. I ran only slightly quicker than last year and was lucky that Dave Criniti was pacing the 3hr marathon group and John Dutton was doing the 50k as I think I would have struggled against those guys. A win is a win so I’ll take it.

What do you relate your consistency to in competing basically injury free and always hitting good times in recent marathons?

Long-term consistency helps with maintaining an injury free body as I’ve built strength over a long period. That said my early years in the sport were plagued with constant injuries and I pretty much retired my competitive ambitious in frustration. I never really stopped though and gradually built the strength up over years. Consistent running leads to consistent performances. I also think realistic expectations and goals keep me from going too hard at the start so I rarely blow the times out.

Will you be defending your Australian Marathon Title this year?

Probably not as I’ll be working towards the World Duathlon Titles in Adelaide in October so a September marathon is out of the question. I’ll be doing Gold Coast Marathon in July.

Do you have a target time/goal for the marathon? More so than that, do you feel your best marathon are ahead for you?

In the lead up to each marathon, I try and have a careful and honest think about where I’m at and what I can realistically achieve. In Gold Coast last year I was pretty certain that I was in the best form for a few years and had rested up well enough to put in a good performance and it worked out well. Canberra is a tougher, more undulating race and after a summer of triathlons and the least amount of running for years, I still figured I might be able to run quicker than last year if I paced myself well. Although I suffered late in the race, probably due to the reduced mileage over summer, it went to plan.

In terms of PB’s obviously my best is behind me but I think in terms of achieving goals and executing a marathon well perhaps the best is still out there. For example I think last years Gold Coast was one of my best ever but I’ve obviously run a few quicker.

What’s a typical training week look like for you?

These days it is far from the 180kms+ of a few years ago that’s for sure. Over the past few months I’d try and hit a few key sessions. Obviously the long run built to over 2hrs30mins, solid tempo runs, the Mona fartlek and a mix of other sessions like 2k reps over undulating courses. I don’t run twice a day very often anymore, as there is riding and a bit of swimming thrown in the mix as well.

Do you cross train?

Yes – I started riding again a few years ago after the Achilles revolted against me and refused to respond to treatment. I’m convinced that if I hadn’t started to ride I wouldn’t be running this well still. After Canberra Marathon last year I decided to try and qualify for the World Duathlon Championships to be held in Adelaide this year so kind of transitioned from riding just for recovery to riding with a purpose. I managed to win my age group at the Australian Duathlon Titles in October 2014 (a week after Melbourne Marathon) and then as summer approached I started swimming for the first time in 20 years. Unfortunately I swim like a runner!

Do you have a favourite/key session in the bulk of your marathon lead up?

I guess my favourite type of run is a cut-down style of tempo where I roll out easy and then progressively work the pace down to quicker than marathon pace. The other key is the Mona – perhaps training theories have progressed but this session remains a key one in my inventory – typically run with hard floats. So in essence hard/harder rather than easy/hard.

If you could give one bit of advise to aspiring marathoners of all levels, what would it be? Favourite way to spend your down time?

Long-term consistency. Run when it’s wet, when it’s cold, when you’re tired, sick of running and couldn’t really be bothered. No secret I’m an advocate of miles with selective hard sessions that form only a small percentage of the total weekly workload. Don’t get too wrapped up in an individual session but rather the cumulative benefits of progress over time.
As for down-time, read a book, watch a movie or clean the car (sad but true).

Thanks Rowan and all the best