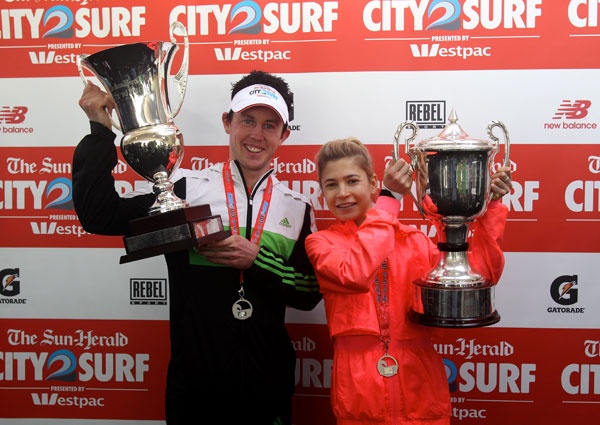 Question: How do you feel about your form leading into this year’s city2surf?

My form coming into this year’s city2surf hasn’t been great especially in comparison to the last two year’s preparation. I’ve started off this winter quite slowly and I haven’t really done any hard sessions until the last couple of weeks. I’m probably a lot further behind the fitness that I’d like to be at for the city2surf, but the last couple of weeks have been a bit more promising. I’ve got my mileage right up and have also been doing some pretty solid sessions more so in preparation for Melbourne Marathon. I’m gaining a fair bit of confidence with my recent training but I know that I’m toeing the line between being quite fit for the city2surf or either being extremely flat. I tend to think I’ll be fine and ready to run when it comes to race day!

Question: You’ve won the last two city2surf’s, what do these victories mean to you?

I think the first one meant the most to me out of both victories but I’m still quite proud of the way I attacked last years race to defend my city2surf title. The first year I was up against some absolute quality runners, two in which soon after qualified for the Olympics. I knew I was in good shape but wasn’t really expecting to outkick the likes of Michael Shelley in my first time racing the tough city2surf course. The city2surf is quite a prestigious event highly regarded by distance runners and the general public. Other than the Stawell Gift, the city2surf is probably the only running race that most of the Australian population could name. It’s gathers 80,000 runners from all over Australia and for most of them this is the event they train for each year so it’s quite a huge event to win.

The last two years have had strong head winds so they haven’t been ideal conditions for fast running regardless even if I had a massive gale force tail wind I still wouldn’t get close to Moneghetti’s record. I think he’s record is quite safe and I don’t see anyone getting close to breaking it for a long time.

Question: Do you do any specific training for the city2surf? For example do you add extra hill sprints into your sessions in preparation for heart break hill?

The first year that I did city2surf I didn’t really do any specific hill work session. I would just attack every hill I came across in sessions and even jogs. I did lots of training around The Tan so every time I came to Anderson Street Hill I would basically sprint up it mid rep. As for the second year I did a couple of hill session in prep for heartbreak hill and the hills that proceed. The sessions were very basic hill sessions, something along the lines of 4-5 x (90sec and 30sec efforts) with jog back recovery. The first year I felt really strong up heartbreak hill and really picked it up over the last half of the race. As for the second year I didn’t feel that great running up the hill and had a slower second half but I believe that was only because I went out quite fast and tried to lose Harry Summers on the hill.

Question: If you could offer any advice to the 80,000+ runner’s a few weeks out from the event, what would it be?

Get your finally key sessions done over the next week or so which will help put you in peak form and ease up in the last week with a taper. You can’t really gain any extra fitness over the last week instead it will hinder your performance with training too hard. The way to harness all your hard work is to take it easy and freshen up. You should already know your ideal taper which can be practiced in lead up races, but if you have never done one before just basically reduce your weekly mileage, the amount of sets, reps & distance, and reduce the intensity or effort.

Question: Can you talk us through your nutritional intake the night before and the morning of the race? Do you have a staple pre-race breakfast?

The night before I try to do a stereotypical carbo load with like a pasta type meal. For the city2surf or any other race that has an early start in the morning, I would have a massive meal the night before that would hopefully satisfy me to the race. I try not to run the risk of getting a stitch during the race by not eating in the last couple of hours leading into the race so I don’t have a pre-race breakfast routine but if I happen to wake up way too early than I’d have just a light snack and go back to sleep until an appropriate time.

Question: Do you get a chance to celebrate your larger race victories with a few beers, or a favorite meal?

Yes, I do think it is important to spoil yourself after running well. I think I made the most of the free food, beverages & massages that were offered in the Fairfax tent last year. The city2surf has quite a post race atmosphere where most of the runners reward themselves, celebrate or commiserate with a couple of beers. I’d definitely recommend other runners to check out Bondi post race for a nice enjoyable social afternoon or evening with their fellow runners.

Question: What’s the plan after the city2surf?

Regardless of my result, I will be catching up with friends and fellow runners down in Bondi for a nice social afternoon. The following days after city2surf I will be jetting off to South America for a bit of a holiday in Buenos Aires with my girlfriend. It might be a holiday but I’ll still be maintaining my training in preparation for my debut Marathon in Melbourne in October.

Thanks for your time Liam and all the best in the race.