Home Features Interview with Josh Ralph: 2014 and beyond 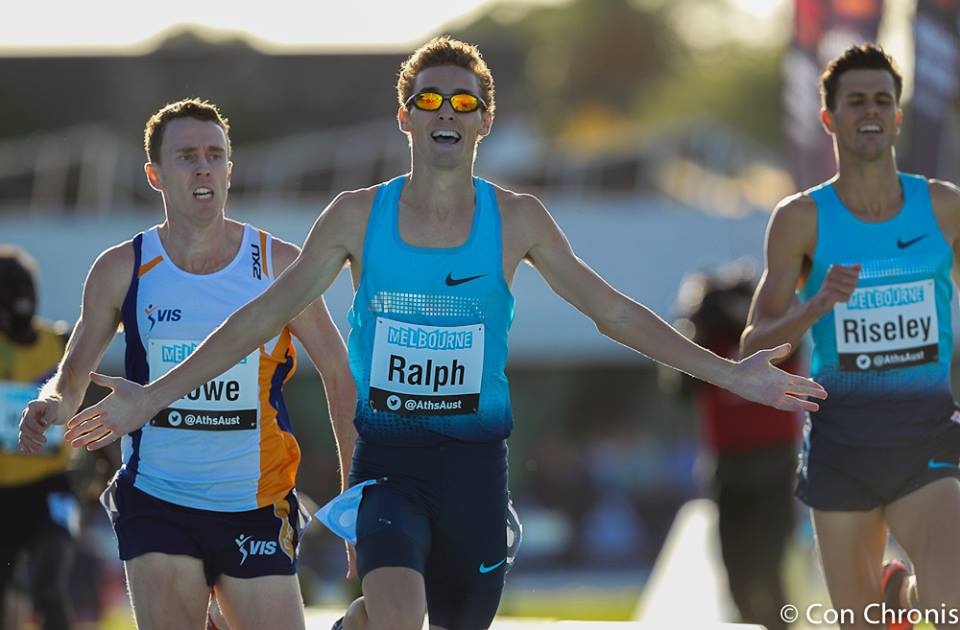 Runners Tribe
Josh Ralph, thanks for taking the time out to have a chat with us. Before we get specific, how did you feel 2014 was? A summary would be good.

Joshua Ralph
I know it’s a bit cliché, but it has really been a roller coaster season. I had a great domestic season stepping up to the 800, and that’s has given me great confidence going forward. Unfortunately I got very sick after nationals, and then also broke my left foot during my race at Comm Games which made things hard to deal with. So it has been another big learning curve this year, but I can still say that I’m happy overall with my year

It was an interesting year, in starting out fast, only getting faster through the domestic season but hitting some big hurdles post nationals to comm games. First things first, why did you make the change from 400m to 800m? And when did the training adjust?

I would love to have my time again post nationals, but it’s all just experience. I stepped up to the 2 laps primarily because I have a cross country background, and probably not enough speed to run 44 for a 400m. The plan was to step up to 800m one day, but not as soon as I did. The catalyst for change was not getting a run in the 4×400 at World Championships in Moscow, and so I wanted to make sure that it was never up to someone else whether I got to run or not. So we decided to try an 800 at Zatopek, and make a choice after that. Since I ran a B qualifier in my first race, we decided to stick to 800s and so that was when my training changed.

Well I was already doing a much higher level of volume than the other 400m guys, so I would say it was more 600m training that I was doing post Moscow. After Zatopek my coach Phil Moore and I decided to increase my volume to about 60km per week and we had less focus on raw speed sessions, and more of a focus on speed endurance, along with slightly increasing the volume in my base sessions.

Sounds good. So there wasn’t much Christmas cake over the break as you drove to Sydney mid-altitude training camp winning a 400m interclub in 46.76 followed a few weeks later by winning Adelaide TC 800m in Adelaide in 1:46.86. Obviously at this point you had gold at nationals clearly in sight?

Yes I had a bit of a hectic 8 weeks after Zatopek. I also squeezed in a 2 week trip to Belgium to visit my girlfriend. Obviously the goal was always to win the national title, however Adelaide was Alex Rowe’s first 800 of the year and Jeff Riseley hadn’t raced yet, and I was also new to the event. So to be honest, I wasn’t yet sure of what I could do during the season, so I just took each week and race as it came.

Belgium would have been chilly at that time of year… Did you hit any indoor tracks?

No, unfortunately the only indoor track in Belgium is in Gent, on the other side of the country. So I just rugged up and did my sessions in conditions between -5 to 2 degrees. I actually managed to have a really strong 2 weeks of training while I was there!

It’s not that bad is it. So you ended up running 1:45.80 coming 2nd at Melbourne and winning nationals in 1:46.57. Did you expect to run this quick in Australia? Was training indicating this?

To be honest I actually didn’t know how fast I was going to run during the season. I believed that 1:45 was a good goal to have, but just because training is going well doesn’t necessarily mean that you can race well- running in a pack is vastly to running in lanes, there is so much more to think about. I was sure by the time nationals came around that I could run 1:45 as I had run (in separate sessions) a 1:15.3 600m and a 60.1 500m during training. So I knew that I was in the best shape I had ever been in. It was just about translating those times and that form into a race, where tactics are involved.

1:15.3 is a fast 600m, in fact almost an Australian record. Will you have a crack at this record of Lachlan Renshaw’s in the future?

I would like to have a crack at it one day, but it all depends on where it fits in with training and other races.

Renshaw is proud of that record so he might be a bit nervous reading this. What is your endurance like? It would be great to hear a bit more about your training in the off season. And perhaps a ruthless speed workout or 2 you’ve been happy with.

My endurance is where I can make the biggest improvements I think. In the off season my volume doesn’t increase too much actually. I do 1km reps quite often, maybe only 4-5 reps in the session but with longer recovery of maybe 5mins. I don’t do as much speed now as I was when I was racing 400s, as there is more of a focus on speed endurance. But a really tough session of mine is 400, 300, 200, 200 where I’ll aim to hit 47.8, 35.8, and then whatever I have left for the 200s, which is normally around 23.5-24. It’s normally a session that leaves me feeling rather unwell afterwards!

How fast would you run the 1ks? That speed workout sounds painful. How long would you have between the reps?

The 1kms will be between 2:40 to 2:45. It’s the type of session where you’re hurting after 3 reps pretty decently, and then you have to pick it up. For the speed session the recoveries after often around 8min, 6min, 2min.

Ouch. Thanks for some insight into your training. So you got sick after nationals; what was the illness? And how did that lead into Europe?

I had some form of the flu that actually stayed with me for 6 weeks and ended up putting me into hospital in the US. I was over there to do altitude training in Flagstaff, for 5 weeks, as well as doing Penn Relays in Philadelphia and World Relays in the Bahamas. However in this whole time I managed to get about a week of training done which was incredibly frustrating. It just meant that I raced in the Bahamas very unfit, and so I had to spend my time in Europe trying to build back up to get some fitness for Comm Games. The illness basically attacked my nervous system and so I couldn’t do training at any intensity until the end of June.
After being on such a high after the domestic season that must have been frustrating to say the least. But you recovered and got to the start line at Glasgow…

Yes it was incredibly frustrating as I sat and watched my fitness go down. However I was very fortunate to be in Cologne with other athletes who kept encouraging me and pushing me to get back into shape for Glasgow!

Good to hear. And how was your Commonwealth Games experience in general?

I had a great time in Glasgow. The Village is a different world and was great. The Games were really well organised and I think the experience that I gained will help me immeasurably if I make the team to Rio in 2016. Of course, I was utterly disappointed to break my foot during my race, especially after working so hard after being sick. But that’s the nature of racing, and I can’t be bitter about it. I’ll just use it as further motivation for this next year leading into Beijing.

Good attitude. After the Comm Games you did a bit of travel… Where did you go? What did you like best?

Yeah I decided since I couldn’t run for 8 weeks, I would do some travel. I went to Mallorca, France, and then I went to Scandinavia and Iceland for 2 weeks, then I went to Tuscany for a week and Spain for a week with my girlfriend before coming home. I actually loved Iceland, I thought it was such an interesting place. Northern Norway is also very picturesque! But then again it was always nice to go to the beach and enjoy the sun in Spain!
Very diverse locations. Have you ever thought about going to college in the USA?

Well after school I did an exchange in France for a year in 2010, and I wasn’t running until the end of 2011. So I had already started Uni when I got back into running. It did cross my mind, but things were working so well with my coach here that I decided to stick with something that I knew was working. I am also receiving an incredible amount of support from Sydney Uni so my set up here in Sydney is perfect.

Fair enough. Wrapping things up, what are you currently doing other than preparing for the upcoming season?

I took this semester off uni, however I am usually studying B. Of Applied Science at The University of Sydney part time. I also work several times a week at one of my family’s Bakers Delight stores. I’ve been busy catching up with friends that I haven’t seen in months, and mixing that in with my training.

Sounds good. Thanks for the chat Josh. All the best for the upcoming season.