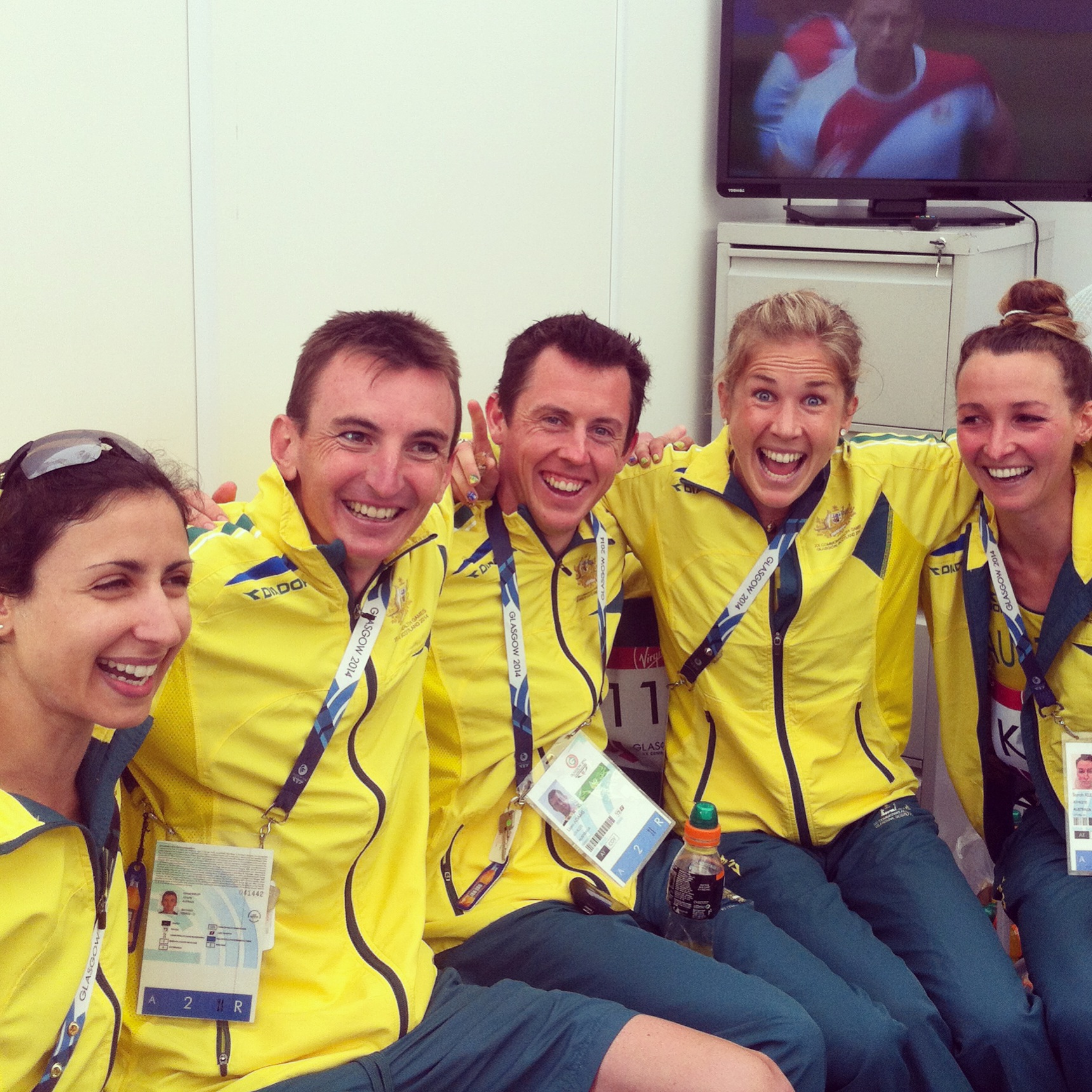 Did you have some time off after the Commonwealth Games?

I did! My coach (Adam Didyk) and I had planned a longer than usual ‘rest’ period post-Glasgow for a mental as much as a physical break from normal the training routine. As it turned out, I sustained a metatarsal bone stress injury in April that required some training modification in the lead up to the Commonwealth Games. I really didn’t notice it during the race but an MRI afterwards showed that 5 weeks completely off running was needed… not so bad given that I was going to have some time off anyway! I enjoyed a holiday in the Greek Islands, plenty of catch ups with friends and made the most of not having to rush out of bed for a run every morning.

In hindsight, what did your performance in Glasgow mean to you?

Australia has a rich and highly successful history in the marathon at the Commonwealth Games. Our own Chef de Mission in Glasgow, Steve Moneghetti, is one of many Australian athletes who have represented our nation with pride and integrity! To initially hear of and later see footage of Michael Shelley running such a brave, focussed and smart race to win gold for our country was one of my proudest moments as an Australian. To then run the race that I had planned and come away with a bronze medal and a personal best made for a very special moment. I was so excited to be able to hold up the Australian flag with my fellow Australian team mates, my coach and Steve ‘Mona’ Moneghetti by my side, my parents, brother and friends out on course and the support of the Aussies at home. My performance was the outcome of hard work, belief and support from the people around me. The Glasgow experience demonstrated to me the importance of persistence, willingness to try new approaches to training/preparation if necessary, having trust in those around you and maintaining a positive mind-set. Last but not least, it fuelled my motivation for my future goals and I look forward to the years ahead!

What does a typical training week look like for you?

A typical training week during marathon preparation involves 3 key sessions per week, recovery jogs on most days and a long run of up to 2 hours 30 on a Sunday. These sessions may include fartlek training (20-30 minutes), intervals with a relatively short recoveries, steady effort (tempo) or threshold runs and the odd track work-out. I usually have a couple of jogs on a Monday and a longer run on Wednesday. Strength and conditioning sessions are incorporated into my training two days per week, as well as one boxing hit-out and a Yoga or Pilates session where possible. Total mileage varies from week to week but has sat anywhere between 145-180kms in my previous marathon preparations.

Can you talk us through one of your favourite/key track sessions?

In the lead up to a marathon, Adam often sets me a few key marathon pacing sessions. My favourite involves 3x5km repetitions with 3 minutes of recovery. The first is done at a pace 5 seconds slower than marathon pace (MP), the 2nd at MP and the 3rd, 5 seconds faster than MP. The reason I love this session is because I get a good feel for marathon pace and also a sense of what form I am in at that point in my preparation. It provides a useful opportunity to trial drinking whilst on the run and experimenting with gels, footwear etc. My most uncomfortable sessions are those involving high speed repetitions which is probably another reason why I feel like I am in my element with this longer-type training.

Do you have a role model, or some one you look up to in regards to running/sport/life?

I have plenty! One that stands out at the moment is my brother, Jack, who has been recovering from a foot injury for most of this year. He recently found out that his injury requires further intervention and time away from running and the sport he loves, football. I admire his positive outlook, patience, bravery and persistence. It has certainly made me appreciate every step I have taken on the training track over the past few weeks, more than ever before.

Is making the Aussie team for Rio 2016 a major motivating factor, day to day for you?

Indeed. When I started running with Adam as coach in 2008, my long term dream was to one day represent Australia in the Olympics, with Rio 2016 being the big target. That dream still stands and I am fortunate to have had a taste of this level of competition during the London 2012 Olympics, where I learnt so much. If motivation is ever dwindling, during times of frustration with niggles or injury and also when all is going well, I love to look back over photos from London, Moscow, Glasgow and other special running experiences. It was important to let my mind escape from running for a good month or so after Glasgow. Over the next 18 months however, the goal of making the Aussie team for an opportunity to don the green and gold kit and compete to the best of my ability in Rio 2016 will be near the forefront of my mind!

How many am I allowed to say? I love seafood, slow-cooked meat (lamb/pork), anything involving banana and caramel or apple and cinnamon and a good pub burger with crispy sweet potato wedges!