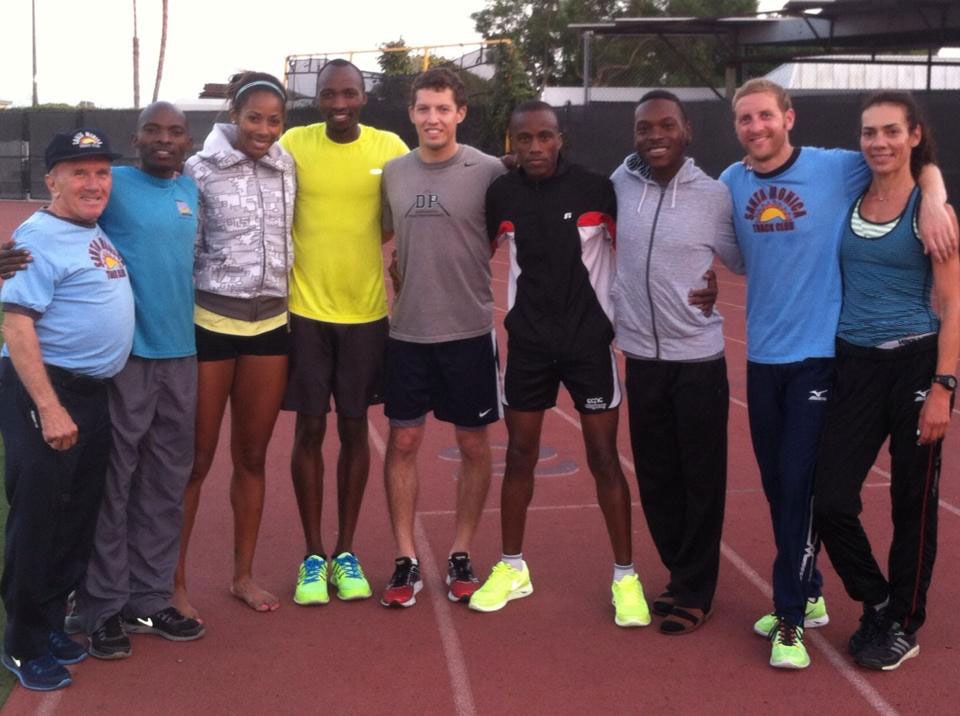 By Matt Fox
James, thanks for taking the time out at 7am in Los Angeles to have a chat with us. Please tell us what you have been doing over the last few months…

James Gurr: No problem, thanks for asking. The past few months have been pretty intense, I guess that’s to be expected when you move country. I’ve been training my butt off with the Santa Monica Track Club and just been enjoying what LA has to offer.

(Q): Interesting… When and how did the move to SMTC come about?

(A): Well After the 2013 season went so terribly, I felt that a change needed to be made. I had changed coaches for the 2013 season in the hopes of breaking 1:46, but the gamble didn’t pay off, in fact I had my worst season in 4 years. I thought it was time to take a bigger gamble. I had always idolized many past SMTC members since I was a kid. Guys like Carl Lewis, Mike Marsh (still my favorite sprinter), Johnny Gray, they were guys I always watched. I saw my old college sparring buddy Felix Kitur drop a 1:44.8 at Oxy this year in his first year with SMTC. That was all the convincing I needed.

(Q): Sounds like a pretty logical move, before we talk more about the set-up there, why do you think 2013 went so badly?

(A): I think it was a case of just having the wrong coach for me. The work that was being given was quite technical, but there was no base work. It was all very short and fast work, which left me neurally shot, and also extremely lacking in base fitness. As a result, I was often tired, and unable to finish sessions and of course races. I would get to 600m and have nothing left, even if the pace was modest. I just felt shot and my times compared to 2010-2012 indicated that. I also felt noticeably heavier, despite my weight not being all that different. I don’t regret taking a chance; just this particular gamble didn’t pay off.

(Q)There is nothing wrong with a gamble and speaking of gambling, you’re pretty close to Las Vegas there, how many sneaky weekend trips have been made out there so far?

(A) : Hahaha, none so far. At least right now, Saturday sessions often leave me absolutely stuffed, and it’s not surprising to have a lot of the team members having a late morning to early afternoon nap, so the last thing on our minds is a road trip to Vegas. BUT…it will inevitably happen at some stage. You and I both know I enjoy a cheeky game of Poker.

(Q) We do and a few rude quotes have been made in call rooms… refresh my memory.

(A): Oh yes hahahahahaha. Well that would have to be the Melbourne Track Classic in 2010. After arriving at the call room we both noticed a certain Mr Rudisha talking to Sammy Tangui in Kenyan (or whatever language they speak), and well you decided to be a little cheeky and remarked fairly loudly, “Hey, English only in the call room. No Kenyan.” Anyone who knows me knows that my knowledge of movie quotes is a little…scary. I picked it straight away as an adjustment of the Ed Norton quote from ‘Rounders’, when he said “English only at the table. No Russian.” Rudisha looked at you a little puzzled, then at me since i started laughing and quoting lines with you. Been a standing joke ever since.

Didn’t hurt the performance though. I Ran my first 1:46. Maybe I should poke fun at another Kenyan when he speaks his native tongue in the call room.

(Q) That was a big break through day for you and even since then there have been slight improvements but it seems now you are getting closer and closer to that next break, which hopefully comes in 2014. Back to business and tell us about how you actually made the deal to come across to SMTC. Justin Rinaldi is a good friend of yours who has been very closely connected with SMTC, did he assist in the process?

(A) Yes Justin was certainly a key figure in helping me make the move. I have formed a close friendship with JR over the years. Justin is quite remarkable in the fact that he will always be be willing to help out someone who really wants to succeed, even if that person is a rival of his own athlete, in this case Alex Rowe.

He had offered to coach me, which I had seriously considered, but I had become a little tired of the scene here and felt I needed a change. He sensed that too and suggested I get in touch with Joe Douglas (founder of the SMTC). Having guys I already knew on the team (Prince Mumba, Felix Kitur, Masato Yokota) I already had a platform to start from. JR got in touch with Joe, vouching for me, and the rest progressed from there. Joe checked my times, was convinced of my desire (and from what JR and the guys had told him) and offered to coach me.

(Q) JR certainly does hold some great value in the sport and it’s great to hear that it’s worked out and the transition over there has worked so far. Tell us firstly about what the training has been like under Joe Douglas at the Santa Monica Track Club…

(A): Well it certainly has been very volume based, more than I’ve ever had. I had always been a little against volume since college, but I found that HOW the volume work is done makes a difference. It was hell adjusting to it initially but Joe has shown time and time again with various athletes how effective his methods are so I was not in a position to question him. I have seen how much fitter I have become and even in the volume sessions, there has been an element of quality that is lacking in many other programs. That said, we have started on track work and there has been an element of speed introduced furthermore so the balance is very good, though it is still very much volume based.

I did hit a rough patch with an Achilles issue, from a pair of trainers, and that did stall my momentum as I was out for a spell which was frustrating given the improvement that was shown. Joe too, was frustrated as he was very pleased with how I was coming along, but fortunately it has been remedied and I’ve been back into training, though I have noticed the effects of my forced break.

(Q)It sounds very interesting, do you feel like sharing any secrets today, you just came home from a date so I’m thinking if there is ever a time to share secrets, its now…

(A): Hahaha not a chance. I’ve always been an advocator of keeping training methods quiet for the most part…and the details of my dating life.

(Q) Fair, fair. Outside of the training, what do you like to do with your time in Los Angeles?

(A): Well as evident, I’ve been scoping out what LA has to offer. Managed to get some freelance tutoring work as well which keeps me busy through the week and gives me a decent income
(Q)It would be very good to hear a quick overview of your time spent at Seton Hall…

(A): Sure. It was certainly an experience both athletically and in terms of life in general. I certainly grew up a lot in those 3 years. As an athlete, I became much tougher as I was almost always asked to run multiple events per day. That helped tremendously when I had to back up for running rounds. As a person I had to really commit myself and be responsible for juggling athletics with academics. I made some blunders while I was there, and it’s hard not to regret some of the mistakes you make, but ultimately it helped me develop as a person, so I can’t completely regret it.

(Q) And I guess you have some life long friendships there as part of a college team? Have you managed to catch up with them whilst being over there, this time around?

(A): Yes absolutely. I dare say my best friendships were made in college. It’s coincidental you mention that as just earlier today I was contacted by one of my close friends, one of the most naturally talented runners I’ve met, (and who is a dead ringer for Chris Brown) asking for my new address so he could invite me to his wedding. It was at our party that he first started dating his now fiancée, so it’s good to reconnect, and it shows that time and geography doesn’t affect real friendships. I have been in touch with many others, some of which I have already reunited with

(A):Well ideally (which is a word that doesn’t always go hand in hand with athletics), if the stars align, it will be the time that James Gurr finally makes a breakthrough into the elite international echelon of 800m runners. I also feel that I can perhaps gain a little recognition. Despite being towards the pointy end of the 800m domestically over the last few years (usually top 3), I feel that I have often been overlooked, forgotten and sometimes not even known at all, which can be frustrating.

Next year I would expect to qualify for Commonwealth Games, which would be vindication as I missed out by the skin of my teeth in 2010. Provided things go well in 2014, then logically it would be World’s and Olympics. It’s a time that I feel is right to break into the 1:45’s (at least) as I have been around for a while now, and I feel that it would be a reward for all the years of hard work and frustration for me to get where I feel I should be. I’ve often fallen short, by my own standards at least, and it would be satisfying to erase that stigma. I feel being with SMTC will give me the best chance of doing so.

RT: You’re certainly giving yourself the best chance possible, with the team around you. Good stuff James! Thanks for the chat. We’ll touch base during the outdoor season.

CollegiateDraft.com is a new student-athlete recruiting company aimed at providing a simple yet specialised and inexpensive way for athletes to apply for a University scholarship in the United States.

CollegiateDraft.com enables athletes to register their training, academic and lifestyle preferences, which are then matched by algorithms to best suited and relevant Universities throughout the United States. The athlete’s information is then sent to the Head Coaches of the matched universities and the bidding for the athlete commences.