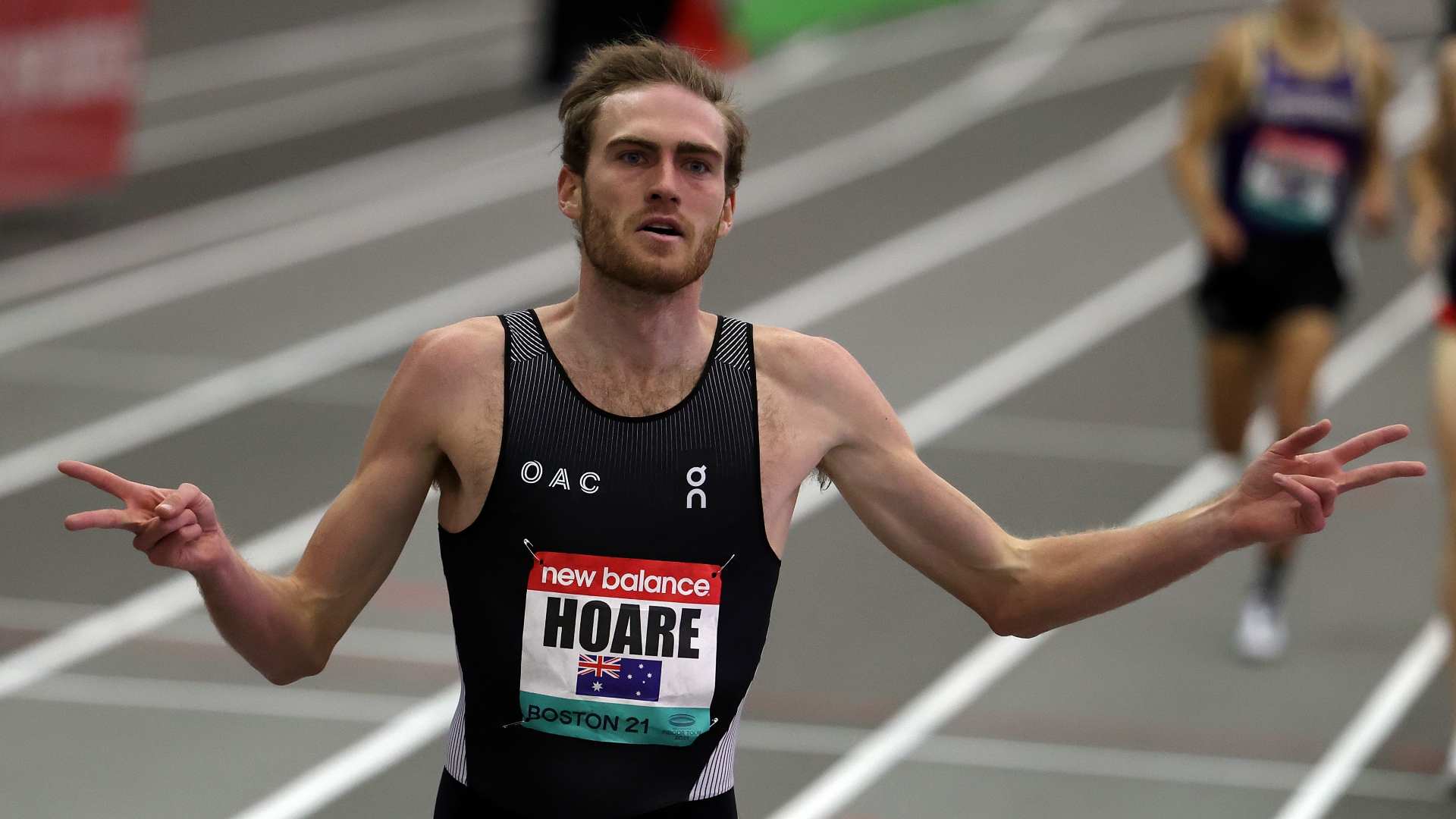 In New York on Saturday (29/1), Australia’s Ollie Hoare celebrated his 25th birthday with the biggest win of his career, when he beat a great field to win the prestigious Wanamaker Mile  New York’s annual Millrose Games.

Hoare ran a new Australian national indoor record (3.50.83) and was marginally outside the top ten all-time in the indoor mile. Hoare beat Olympic bronze medallist Josh Kerr (GBR) in a perfectly-judged race. The confidence shown by Hoare and the finishing speed he displayed augurs well for the European season and World Championships later in the year.

Late last year, Hoare indicated he was in superb shape, when he ran a national record over 5000m indoors and he has shocked many observers with his brilliant run in New York.

The Wanamaker Mile is one of the most prestigious and celebrated races in the history of the mile and it has been won by many of the all-time greats over its long history.

The Irish have a rich history in the event, with Ronnie Delany, ‘Chairman of the Boards’ Eamonn Coghlan, Marcus O’Sullivan and Niall Bruton all recording multiple victories. Coghlan’s record of seven wins was finally beaten by Bernard Lagat in 2010.

This year also saw 38-year-old New Zealander Nick Willis attempt to keep his 20-year streak of sub-4-minute miles. Willis was close in recent weeks and was primed for a big race.

Hoare went out and followed a fast early pace by Eric Sowinski, looking smooth and relaxed. The first quarter was run in about 56 -57. Sowinski went through the half in about 1.54, with Hoare right on the pace. Hoare took over after about 1000m and pressed the pace hard. Kerr made a move with 300m  to go, and Hoare was right on the Brit’s tail, biding his time. Hoare kicked hard with 100m to go and blew the talented Kerr off the track, winning by 8 metres.

The women’s mile was just as special, with Ellie Purrier St Pierre (USA) thrilling the crowd with an outstanding win in 4.19.30. Aussie Jess Hull had a very solid run in 4th, with a new national record of 4.24.06.

Ryan Crouser (USA) won the shot in what was originally thought to be a world record, though at the time of writing, there is some speculation that the mark of 23.38 may not be ratified because of ‘faulty equipment’.

The race of the night was the thrilling contest in the men’s 3000m, with Kiwi Geordie Beamish (Hoare’s OAC team mate) getting the win by just 0.11, from American Cooper Teare, with Cole Hocker third, another 0.22 behind Beamish was positively beaming, having run a NZ national indoor record (7.39.50). The most impressive aspect of Beamish’s win was his incredible finishing kick. He ran the last 400m in 53.78 and got a lucky inside run in the straight, showing great strength to get past the two Americans in the last 20m.

Devon Allen showed his class, though was a little slower than expected, with a 7.51 win in the hurdles. Aussie Nick Andrews was 7th in 7.81

Another big highlight was a competitive 60m race. Christian Coleman ran a solid, if unimpressive 6.49, to prevail over Trayvon Bromell by just 0.01.

In all, another great meeting. Full credit to event director, Ray Flynn, with another great evening’s athletics. Flynn has been a brilliant, influential and innovative force in international athletics, as an event director and athlete representative for over 3 decades. As a 3.49 miler himself, he would have been very impressed by Ollie Hoare’s run in the evening’s signature event. Watch for both Olli and Jess Hull to be in the thick of it in Eugene this July.