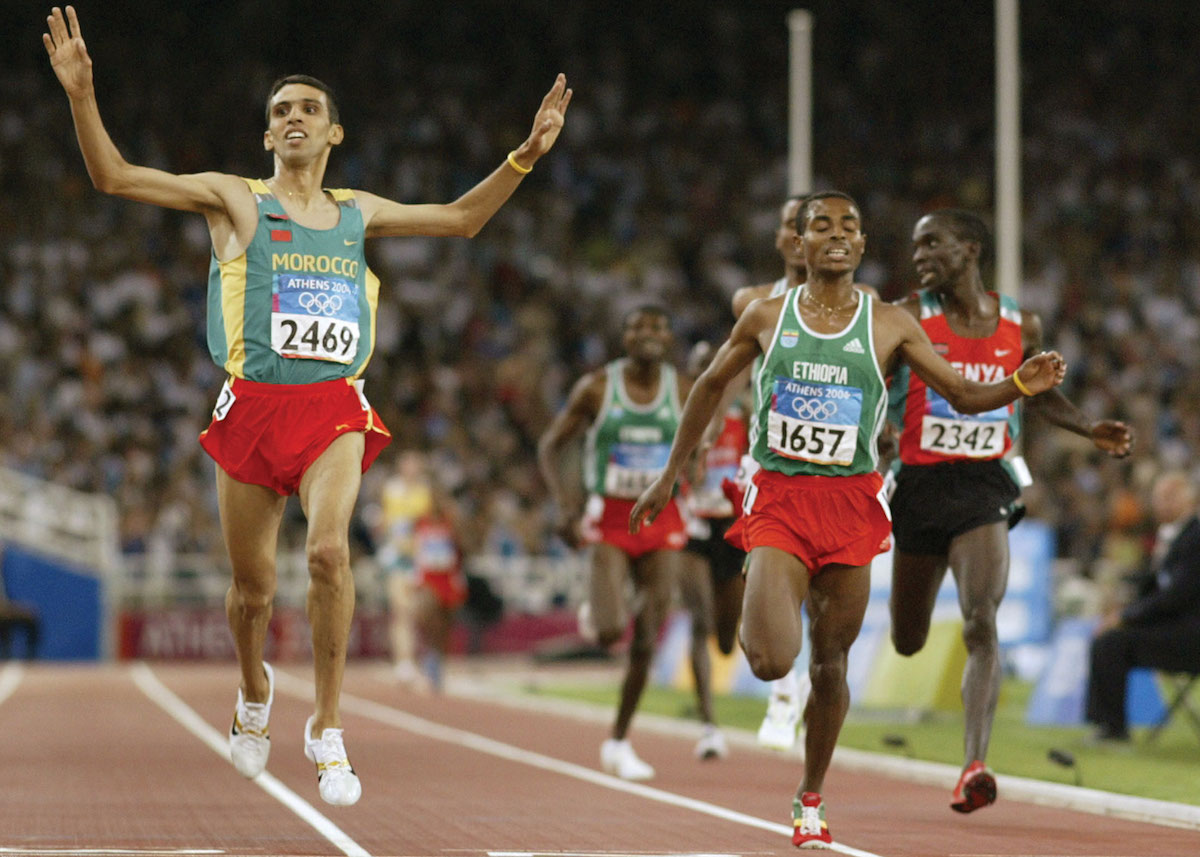 The Best Ever? – With 2 Olympic golds, 4 world championship golds and multiple world records; it is hard to argue against El Guerrouj’s claim to the title of ‘The Best Ever’.

Runner’s Tribe took a look back over 5 of El Guerrouj’s most amazing races. Given the fact that El Gerrouj holds seven of the ten fastest times run in the mile, this was no easy task.

Noureddine Morceli’s world record 1500 time of 3:27.37 was no weak mark. To this day it is still the 4th fastest time in history. Morceli’s world record stood for 5 years, Said Aouita’s for 6, Steve Cram’s for 1, Steve Ovett’s for 3, Sebastian Coe’s for 1, Filbert Bayi’s for 5, Jim Ryun’s for 7, Herb Elliott’s for 7. El Gerrouj’s record currently stands at approximately 19 years. Enough said.

“It’s not just about the physical domination, that was a man prepared mentally to commit himself at the highest of levels, and that is the hardest way to win a 1500m” – Sebastian Coe Commentating on the race

Adil Kaouch, the Moroccan teammate of Hicham El Guerrouj was pretty much was the ideal pacemaker for El Guerrouj over the first 800m. However, this does not take away from the pure quality of the race, nor does it diminish the pure brilliance and dominance of Guerrouj.

Guerrouj won in a championship record of 3:27.65 and in doing so pushed Noah Ngeny to 3:28.73 and third place getter Reyes Estévez to 3:30.57. The quality in depth is nearly unparalleled throughout history. The video and full results are shown below.

“The end of the era of Noureddine Morceli” – Commentator.

Not since Paavo Nurmi in 1924 had a runner won both the 1500m and 5000m at an Olympic Games. In a tactical affair, Guerrouj outsprinted world record holder Kenenisa Bekele, who was also known for possessing an amazing finishing kick. With the pressure off his shoulders after winning the 1500m title, El Guerrouj was mentally free to let loose and run to his full potential.

“It is finally complete. Four years ago in Sydney, I cried with sadness. Today, I cry tears of joy. I’m living a moment of glory” – Hicham El Guerrouj after his victory in Athens.

Few athletes have dominated the 1500m to the extent that Guerrouj did from the mid-nineties through to 2004. All that Guerrouj needed to top off a stellar career was an Olympic gold medal. In Atlanta in 1996 when he was the overwhelming favourite, he fell. Then in Sydney 2000, he was out-kicked by Noah Ngeny and later confessed that he had over-trained substantially leading into the Olympics. However, in 2004 he made no mistakes, his tight victory over Bernard Lagat was inspiring and much deserved.

“He goes from the great never, to the best of all-time” – Olympic TV commentator Bruce McAvaney