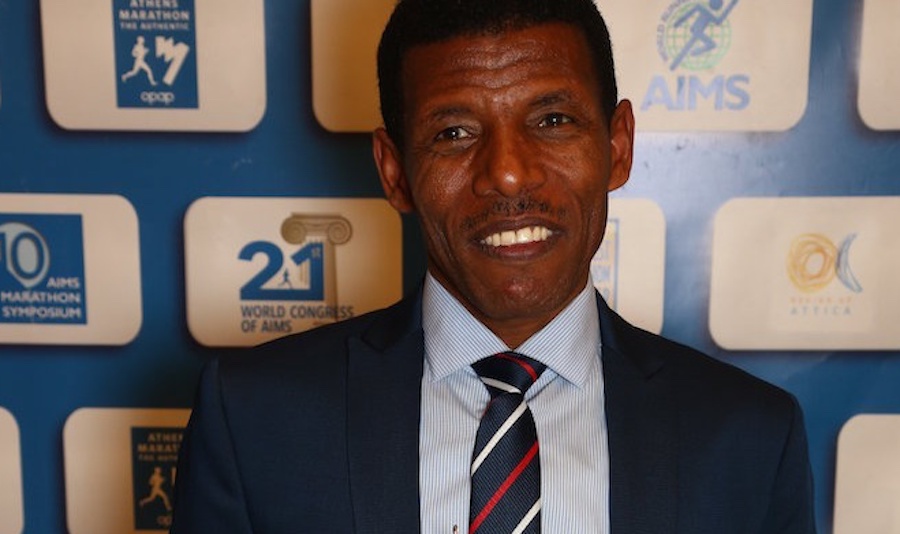 Haile Gebrselassie reflects on Athens, life as a fun runner and his new role as Ethiopian Athletics president

Wherever Haile Gebrselassie goes, the world of running wants to hear the thoughts of the now retired great athlete who has won two Olympic gold medals, many world titles and set world records on the track and the road up to the marathon. When he arrived in Athens to receive last Friday (11/11) a Lifetime Achievement award presented by AIMS, the Association of International Marathons and Road Races, the interest in the newly elected president of Ethiopian Athletics was just as great.

“Greece is a wonderful country which everyone wants to visit. It’s the birthplace of the marathon, that’s why they are coming here to run,” said Haile, speaking two days before some 50,000 took to the roads of Athens, including around 17,500 who ran the “Athens Marathon. The Authentic” on Sunday.

Ever the diplomat, Haile also mused on the possibilities that he himself might one day run in the footsteps of history and take part in the original, classic marathon course from the coastal town of Marathon to the Panathinaic stadium in Athens.
“I want to run this marathon, to be on the start line and feel the atmosphere. Of course, I don’t promise to do it as a competitor but as a fun runner. We’ll see, you never know.”

A more concrete goal is Haile’s plan to revitalise Ethiopian athletics as its new president. Their success has been far from consistent in recent years and the amicable rivalry with Kenya has left them trailing their East African counterparts.
Haile emphasises that his plans will not bring success overnight: “Yes, I have to restructure, I have to decide on what is good and what is bad. I know what the athletes need, what is important for them but also what the federation has to do.”

A source of much debate has been the selection process for Ethiopian international teams. The omission of Kenenisa Bekele from the Olympic Marathon squad for Rio this year provoked the most recent controversy. Haile has clear views on the subject: “The people who were doing the selection didn’t know about the process, that’s why we paid such a price. Rio was really bad but it included things they had done before they went to Rio. That’s also one of the things I have to restructure.”

In recent years both positive tests for drugs and general allegations have come to the fore in Ethiopian athletics. The new federation president will not shy away from the problem: “I shan’t be able to solve the doping problem within a year but we have to clean up the sport – we live in Ethiopia, why should we need doping?”

The man himself looks as trim as when he was setting world records on track and road, looking hardly a day older than when he was winning the first of his four World 10,000m titles 23 years ago in Stuttgart. He may have finished his career as a world record marathon runner but the track retains his fondest memory: “Looking back, I would say the greatest race of my life was the 10,000m in the Sydney Olympics in 2000, the worst was when I dropped out of the New York Marathon in 2010.”

In the meantime, Haile Gebrselassie is turning his attention to getting Ethiopian athletics back into winning shape.