In December, 1952, a young man stood on the starting line for a mile race at Melbourne’s Olympic Park, unsure whether the rumbling in his stomach was pre-race nerves or emanated from the couple of meat pies and chocolate sundae he had wolfed down fewer than two hours earlier.

John Landy had been a member of the Australian team at the 1952 Olympic Games in Helsinki. He had “failed” there, eliminated in the heats of both the 1500 and 5000 metres. A harsh judgement, perhaps, because he had shown ambition and talent in the 1951–52 domestic season as he had whittled down the gap between himself and Australia’s top middle-distance runner, the giant Don Macmillan. Indeed, a win over Macmillan in a mile race in Sydney got Landy into the Helsinki team.

Nevertheless, Landy had failed, a verdict with which he himself agreed. His ambition had been fired, however. He and his Australian teammates — Macmillan and Les Perry — had watched in awe as the great Czech runner, Emil Zatopek, created history with an unprecedented (and still unemulated) distance treble victory in the 5000 and 10,000 metres and the marathon.

When Landy returned home, he threw himself into hard training, harder than he had ever known before and harder than any Australians had ever undertaken. He wanted to see where it would take him. His stated ambition was Macmillan’s Australian record of 4:09.0; unstated, perhaps unknown even to himself, was by how much he might break it.

However, Landy need not have doubted his abilities. The 22-year-old astounded himself – and the world – by recording the fastest mile time the world had seen since Gunder Hagg’s record of 4:01.4 eight years earlier. With a time of 4:02.1, Landy was amazed by the ease of it.

Others were sceptical. “Pass the salt,” one American sports journalist sneered sarcastically, implying that the track must have been short, the timing dodgy — perhaps both. Within little more than a month, another 4:02.0 mile run silenced the doubters.

John Landy’s performance catapulted him to fame. It also fired the starting pistol for another race, the race for the first sub-four minute mile. Within less than 18 months, Englishman Roger Bannister (another “failure” in Helsinki) would become the first man to achieve that feat. A few weeks later, Landy would emulate the Englishman, breaking Bannister’s world record.

That was in May–June of 1954. Two months later, Landy and Bannister would meet in the “mile of the century” at the British Empire Games in Vancouver. Bannister won, but thanks to Landy’s courageous front-running, both men broke four minutes. Commentating for American television was runner Wes Santee, the third major protagonist in the chase for the four-minute mile. Like the other two, Santee was motivated by disappointment in Helsinki.

The quest for the four-minute mile made John Landy a world star, famous from Afghanistan to Zanzibar. Few other Australian sportsmen or women — certainly no other track and field athlete — had achieved such fame. Starting with Edwin Flack at the first modern Olympic Games in Athens in 1896, there had been a handful of Australian champions. Flack, among others, achieved fleeting fame. But no Australian athlete had ever placed him or herself so prominently on the world stage as Landy did from December 1952 through to the Melbourne Olympic Games in 1956. People all over the world knew who Landy was, followed his exploits, made judgements on his athletic strengths and shortcomings. When he struggled with an Achilles tendon injury shortly before the Melbourne Games, an overwhelming flood of letters advising treatments and cures poured into his family’s letterbox from all around Australia and overseas.

Yet this generation of ground-breaking athletes came from nowhere. Up until the post-war period, Australia had no distance-running culture whatsoever. Who conceived the notion that Australians could challenge the world in middle and long-distance? Who nurtured it to fruition? Who carried it on?

The answers are unclear. However, one thing is certain. Australians did rise up to challenge the world at every distance from the half-mile to the marathon. Following the early achievements in Helsinki of Macmillan making the 1500 metres final and Perry finishing sixth behind Zatopek in the 5000 metres, we then had Landy’s world record in 1954, Dave Stephens emerging to beat the Hungarians and break the world six miles record in 1955, and Landy and Al Lawrence taking bronze medals at the Melbourne Olympics.

Following Melbourne, a young West Australian athlete named Herb Elliott rose to the top of the tree. Elliott won the gold medal in the 1500 metres at the 1960 Rome Olympics, smashing the world record in the process. But the high point of Elliott’s brief, incandescent career came in 1958. At Dublin’s Santry Track, Elliott soundly defeated the 1956 Olympic champion, Ron Delany of Ireland, over a mile and broke the world record as he went.

Another Australian, Merv Lincoln, came second, recording the second-fastest time ever run. Delany was third, Murray Halberg of New Zealand fourth and Albie Thomas of Australia fifth. Counting Landy and another 1956 Olympic representative, Jim Bailey, Australia now had the fastest, the second-fastest and the sixth-fastest milers ever and two more (Bailey and Thomas) in the top ten. (Thomas also set world records for two and three miles, both at the Santry track either side of the fabulous mile race.)

Al Lawrence’s 10,000 metres bronze medal in Melbourne was the first of three successive Olympic bronze medals at that distance (Dave Power and Ron Clarke followed). Clarke established himself as the greatest record-breaking distance runner of all time with 19 world records from 1963 to 1967. Olympic gold eluded him, but little else slipped through his grasp as he redefined long-distance running and racing.

Nor did it end there. Pat Clohessy, on whom Landy was a formative influence, became Australia’s greatest distance coach, taking Robert de Castella from a young schoolboy to a world record holder in the marathon (he broke Clayton’s record in 1981) and then world champion in 1983. Chris Wardlaw, following the same principles as Clohessy, guided Steve Moneghetti to the top of world distance running.

A virtually unbroken line of influence can be traced from the 1952 Olympians to the present day. Who should take the credit for starting all this off is open to question, but it was John Landy’s era; he was its first, and greatest, star and he directly inspired and advised many of the subsequent athletes and coaches.

This is the story of Landy’s era, and its impact on Australian athletics ever since. 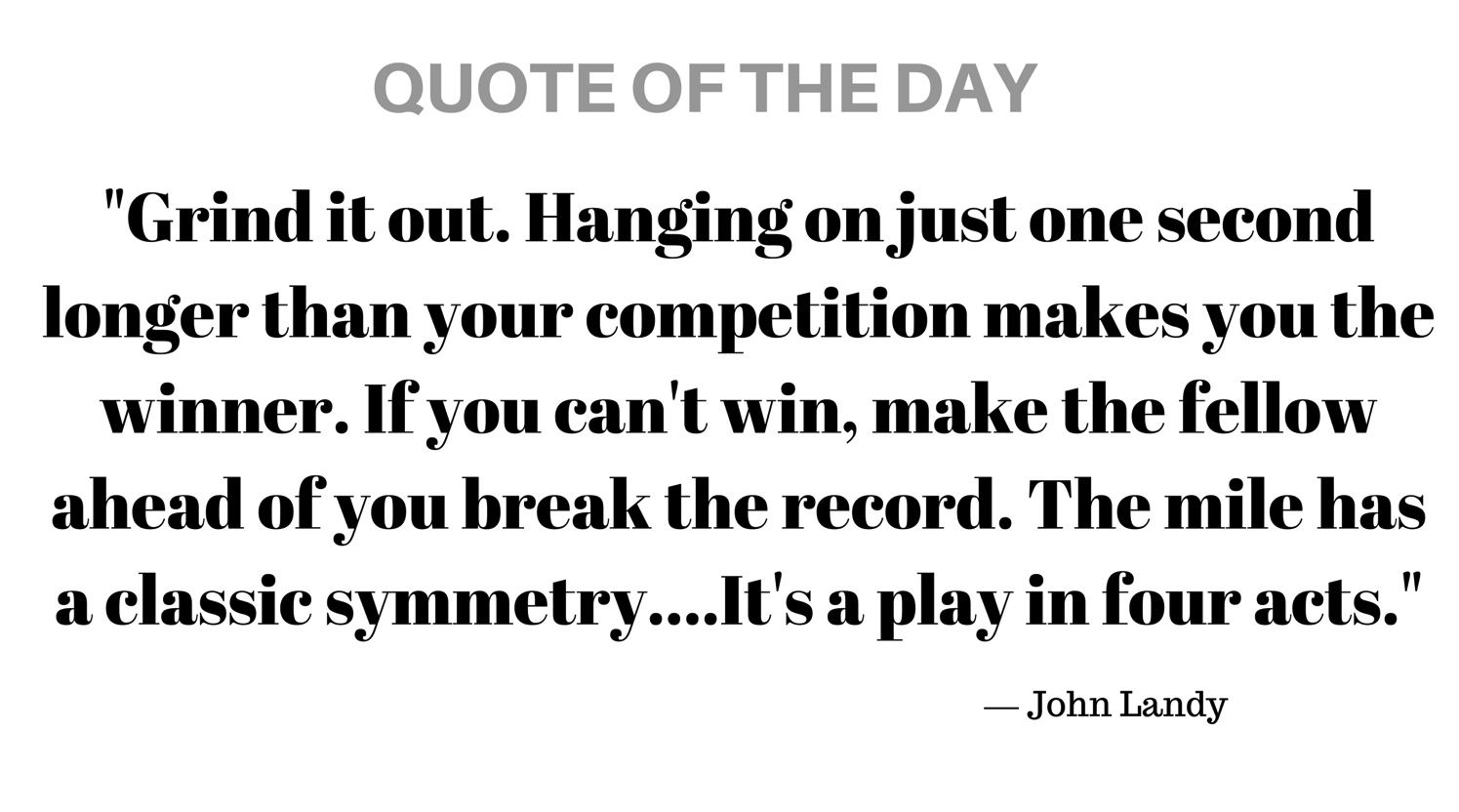