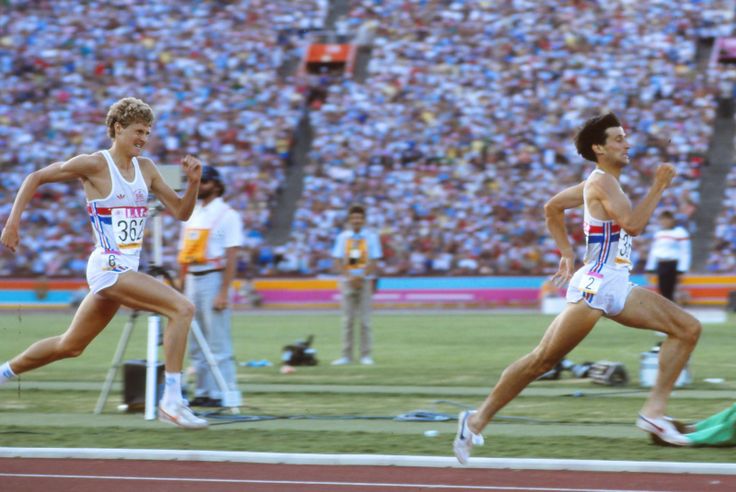 An article by Brett Davies

World record-holder Coe & defending champion Ovett would run the 800m and Cram – the reigning World Champion – would join Olympic Champion Coe and world record holder Ovett in the 1500m as part of the three-pronged British middle-distance juggernaut. They would face established athletes and emerging stars – particularly the 21-year-old Brazilian Joaquim Cruz – who would be a fly in the ointment for the Brits.

In late 1981, Ovett damaged his right knee, almost ending his career. After a few other injury setbacks, he came back in ’83 with a 4th in the World Championships 1500m and a world record 1500m.

Coe, struggled with illness and injury in 1982 & 1983. He was beaten in the 1982 European 800m and after a promising start to 1983 (another world indoor 800m record), he was later diagnosed with toxoplasmosis, missing the World Championships.

Prior to the ’84 Games, the British trio had some setbacks. Ovett spent the (northern) winter of ’83/’84 in Australia and, despite a bout of bronchitis, was back in shape. Cram encountered calf problems, from which he would suffer throughout his career, but rounded into form. Coe, despite being Olympic champion, almost missed selection for the 1500m, as he hadn’t attained qualifying times and was beaten by rising star Peter Elliott in a trial race in London over 1500m, but eventually, British selectors trusted that Coe would come good and chose him for the 3rd 1500m spot.

At the Games, athletics fans would see the British stars against US runners like Johnny Gray, Earl Jones, Steve Scott & Jim Spivey, a cohort of Kenyans and the new sensation Cruz. The year’s fastest 1500m runner, Moroccan Said Aouita, chose to run just the 5000m.

The 800m was four brutal rounds under the California sun. Ovett drew Cruz in each of the 3 preliminary rounds and was suffering breathing difficulties. He had to draw on all his fighting qualities to fall across the line, 4th in his semi and scrape into the final with 1.44.87.

Cruz ran unheard-of times for 800m Championship heats. He ran 1.44.84 in the 2nd round and 1.43.82 in his semi and established narrow favouritism over Coe for the final. Coe had an easier run to the final, cruising through the rounds in a welcome return to form.

The 800m final was awesome. Not quite the calibre of London 2012, though still a special treat for the fans.

The opening 300m was fast, with a lot of jostling for position. The pace then settled, with the diminutive Koech leading at 400m (51.07) and Cruz on his tail. Coe was tracking Cruz and a struggling Ovett was hanging on in the pack. From 200m out, Koech pushed home.

Into the last 100m, Coe moved up to Cruz, just as Cruz launched his kick and Cruz quickly gained 4 metres on Coe, maintaining his form down the straight to win the gold. Cruz destroyed a class field in an Olympic record 1.43.00, a time nobody else but Coe had bettered. Coe ran well (1.43.64 for silver) but conceded he was outclassed. The run, though, augured well for his 1500m title defence.

The next 4 athletes recorded sub 1.45 performances, with Gray and Ovett (1.52.23) trailing in well behind. Ovett, running against medical advice, was briefly hospitalised but recovered in time for the 1500m.

The 1500m had another deep field and the opening rounds were very competitive. Cram, Coe and Ovett all looked sharp and qualified comfortably. Cruz, suffering from a virus, made the decision to withdraw from his semi, depriving fans of another match up with Coe.

The race was another classic. Unlike many major 1500m races, the pace was solid from the gun. Omar Khalifa lead through the opening lap in 58.85 and then Scott took on the pace, bringing the field through 800m in 1.56.81. Coe was ideally positioned, on the leader’s shoulder, covering every move and Cram tracked his countryman closely. Ovett laboured hard, lagging back in the pack.

At 900m, Spaniard Jose Abascal made a bold move to the front, determined to give himself every chance. Ovett rallied and, as Abascal lead the field into the final lap, he was followed the 3 Brits, with Coe in position to strike. With 350m to go, Ovett, clearly distressed, stepped off the track. He was again taken to hospital, but soon released. With 250m to go, Cram made a move to pass Coe and Abascal, but Coe held him out and accelerated into the lead, but Cram pressed hard, staying right on Coe’s tail.

When the two Englishmen hit the home straight, Coe shifted into top gear and quickly opened a 5 metre gap. Coe won comfortably and smashed the Olympic record (3.32.53). Cram, a little below his best, raced well and fell short by just 0.87. Abascal’s courage was rewarded with a bronze medal (3.34.30). Coe had run the perfect race and he immediately gestured towards members of the British press in the stands, as he had been criticised heavily by tabloid media who questioned whether or not he should even be at the games. He had proved himself in the most dramatic fashion.

Said Aouita, who dominated the 5000m to win gold in and smash the Olympic record, claimed he would have beaten Coe, though it would be unlikely anyone would have been anywhere near beating Coe, such was the apparent ease of his win. Here was a great champion back to his sublime best.

Coe would have other great triumphs but would struggle with more injury as he moved into the last years of his career. In 1986, there was a near world record (3.29.77) in the 1500m and a European 800m gold. In 1989, at 32, he ran a 1.43.38 800m and won a World Cup 1500m silver. He was left off the team for Seoul 1988, suffering illness during the trials and there was some controversy over his omission. Coe retired in 1990 and went on to a successful career in business, politics and athletics commentary. He was chair of the London 2012 Organising Committee and is now a well-respected and innovative IAAF president.

Ovett had one last major championship win, easily taking gold in the Commonwealth 5000m title in 1986. He dropped out of the European championship 5000m final though and was well out of the medals in the 1987 Rome World Championships 5000m final. He ultimately moved to Australia with his family and has become an insightful and articulate commentator in athletics, as well as dabbling in other businesses. He is now making a life in Oz with his new partner, former distance star, Caroline Schuwalow.

Cram looked like winning an Olympic title in 1988, as he had run a series of fast times during a very busy European season. In his final pre-Olympic race in Rieti, he tore his calf muscle but recovered in time to run the Olympics. He had missed out on some key training sessions though, and was under-prepared. He missed the 800m final and finished 4th in the 1500m (3.36.24). He ran well, but didn’t have the legs to chase down surprise winner Peter Rono. Elliott fared a little better, winning the silver and ran a gutsy 4th in the 800m.

Cram would compete for another 6 years, though never again reached the dizzy heights of the mid-’80s. Like Coe & Ovett, he has excelled as an engaging and astute commentator of international athletics. He has also become a race director for some Northern England road races and was appointed as Chancellor of his alma mater, Sunderland University.

Though Peter Elliott & Tom McKean would win titles in the early ’90s, Seoul 1988 signalled an end to British middle-distance dominance. For world athletics fans though, Sebastian Coe, Steve Ovett and Steve Cram were inspirational and part of a golden era in international middle distance running that brings back fond memories for fans of our sport.

The author is grateful for the work of Athletics Weekly magazine, the BBC, Duncan Mackay and John Rodda.