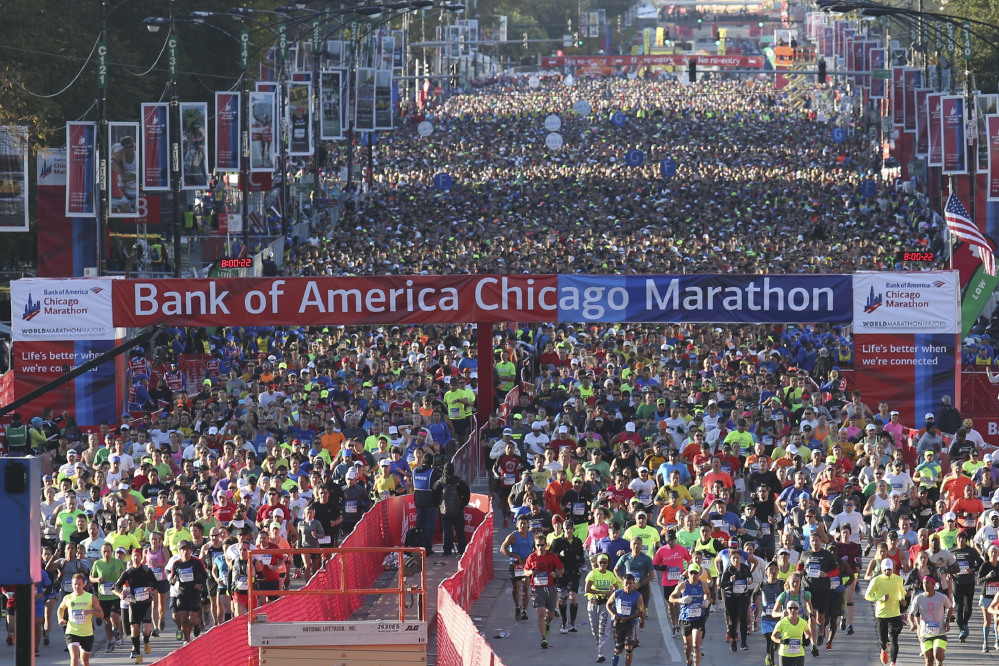 By Bryan Green for RT

Those of you who tuned in to watch the Chicago Marathon were treated to an amazing race. Or more specifically, three amazing races.
Wanjiru landed one more hay-maker than Kebede, and took the title.

Image: Getty Images The first was the headline event, Olympic Champ and potentially greatest road racer ever Sammy Wanjiru versus London Champ and most consistent marathoner the past two years Tsegaye Kebede versus Boston record smasher Robert K. Cheruiyot versus front-running daredevil Deriba Merga versus 20 year-old phenom Feyisa Lilesa (and a couple other studs to boot!). Arguably an even better field than London this past spring. And there was a race within the race, with both Kebede and Wanjiru capable of winning the World Marathon Major’s title and it’s $500k prize with a victory.

If you saw it, you know the race is destined to go down as one of the greats, as Kebede put on surge after surge, dropping Cheruiyot, Merga and, eventually, Lelisa. But the Olympic champ would not go down. He fell off and stormed back time after time, until the final 800 meters when he found his championship gear and blasted home for his second consecutive Chicago victory.

The truth is, though, this was a good race made great by the commentators. There have been closer races before and there will be in the future. The battle itself was hard fought, but it was made greater by the commentators, specifically Tony Reavis, who nearly lost his voice in excitement as he described the action. And while history may not remember it on the level of Ali-Frazier one thing is certain, Reavis was the Cosell of this matchup, and called a great race like it was a classic.

The second amazing race was the new national record set by women’s winner Liliya Shobukhova, who ran 2:20:25 to claim not just the Chicago title, but the World Marathon Majors title as well. Her time was the 15th fastest ever and broke Galina Bogomalova’s previous Russian record by 22 seconds. She ran near perfect splits en route to solidifying her status as the best woman marathoner in the world today. She’s going to be a force for the next couple years.

The third amazing race–and the one I’ve been thinking about all day–was one that was hardly mentioned during the broadcast and is likely to be somewhat overlooked. That is Desiree Davila’s 2:26:20 to finish 4th in the women’s race. That time makes her the 4th fastest American marathoner in history, as it was slightly faster than the 2:26:22 run by Magdalena Lewy-Boulet in Rotterdam earlier this year.

I think this performance by Davila is remarkable for a few reasons. It’s not the 2:26 time in and of itself, as it puts her roughly in the top 500 performances ever. But she’s just 30 seconds behind Kara Goucher’s personal best of 2:25:53, and she has done it by slowly and steadily improving over the course of the past four years.

Desiree Davila ran in high school in Chula Vista, California and never won a state championship race. She never won a Pac-10 title at Arizona State either, much less an NCAA title. She was a very good runner in a conference known for its great runners. She did earn an All-American at 5000m in 2003 and still ranks 10th all-time at ASU for the distance, running 16:17.45, but she never projected to be a future Olympian. Suddenly she is as good a bet to make the Olympics as any other woman out there.

A couple years after graduating she ran her first marathon in 2:44:56 at the Boston Marathon 2007. She then ran 2:37:50 at the Olympic Trials in April, 2008, and 2:31:33 at the Chicago Marathon in October of that year. Ten months later she ran 2:27:53 at the World Championships to finish one spot behind Goucher. And now her 5th marathon is yet another PR. She’s like a 5’2″ Latina Brian Sell, with leg speed. She actually qualified for the Final at the World Indoors in the 3000m, so she’s got a little more range than just the 26.2.

Desiree Davila is the captain of a surprisingly strong Sun Devil alumni squad. Davila stands out for me for another reason, however. She’s the honorary captain on the most amazing alumni team that nobody outside of Tempe, Arizona pays any attention to. There are five active Arizona State Sun Devil distance alumni (that I know of) who are all a threat to make a World Championship/Olympic team and/or win a US championship race. Here’s the list:

Desiree Davila – 4th fastest marathon by an American in history; 11th at the Berlin World Championships

That’s quite a group of alumni still competing. By my count, they make up the 4th strongest alumni squad of any program in the country, with the three schools ahead of them all being powerhouses: Colorado, Wisconsin, and maybe Stanford.

Colorado has Ritz, Kara Goucher, Jenny Barringer, Billy Nelson, Jorge Torres, Brent Vaughn, Stephen Pifer and the Slatterys. That’s damn impressive. Nobody can touch that team for depth and quality. #2 would be Wisconsin, which can put up a heckuva team with Chris Solinsky, Matt Tegenkamp, Tim Nelson, Simon Bairu (CAN) and (if one year in school counts) Evan Jager. I’d like to see some more women, but I’d take ’em over ASU as is. Finally, Stanford has Ryan and Sara Hall, Lauren Fleshman, and Ian Dobson. I’d give them the nod as well.

But the Sun Devils are number 4, ahead of Oregon even. Yeah, the Sun Devils. Whodathunkit? And that’s due in large part to Desiree Davila’s continued progression. The runner who was very good in high school and very good in college has now become very good at the US level. It’ll take one more leap to reach “very good” on the world stage. Can she continue to improve? I have no idea, but she’s only 27 years old, and she’s got a year’s worth of World Championship experience to go with her solid new PR. I think this is a woman we’ll be hearing more from in the future.