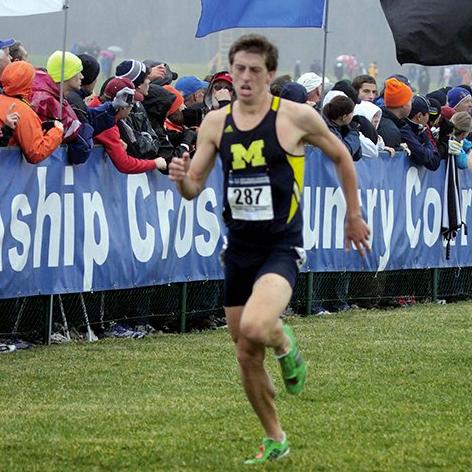 Brendon Blacklaws of Wellington is currently back in New Zealand after just completing his first year at the prestigious University of Michigan. Since leaving sunny Wellington for Ann Arbor, Blacklaws has run personal bests over both 1500m and 3000m, under recently ‘retired’ Ron Warhurst. The Runnerstribe caught up with Brendon to discuss what it’s been like in the first year of his American Whirl-Wind Adventure!

Brendon, thanks for finally getting your shit together and talking to us, I’m sure you have been super busy on holiday in Wellington.

First off, what was your training like in New Zealand before you left for the land of the free, did it suit Ron Warhurst’ training at Michigan?

My training in New Zealand was under Tony Rogers who helped me out for nearly two years before I moved to Michigan. It involved quite a lot of speed work with limited millage, so it wasn’t a huge shock to the system as Ron didn’t have me on big millage straight away, but it was certainly a step up in intensity.

What is it like having Olympic Silver medalist Nick Willis around as assistant coach? Does he help with writing workouts or is he more just to help out?

Unfortunately Nick had to step from his position as assistant coach as it conflicted with some of his commitments to sponsors, but it has been extremely valuable having him around with all the experience that he brings. He’s always good for some advice or a friendly clip around the ears.

What prompted the move to Michigan? Did it help having Dallas Bowden (NZ Under 16 1500m record holder of 3:46) move with you?

Dallas had signed before I did and having him there did influence my decision. I decided that in order to move my running to the next level as well as getting an education I couldn’t pass up such a great opportunity.

How was the initial adjustment? Does anything stand out as being difficult regarding the transition from NZ to the states?

I graduated high school in 2007 so with about 18months out of school getting back to the books was one of the hardest things, especially at a school like Michigan. With Nick, Dallas and a great team around me everything else was pretty seamless.

How is the training compared to what you were doing in NZ? What is a typical training week for Cross, Indoors, and Outdoors.

Training became different in the team atmosphere and took a while to get used too. I got a late start to the cross season with injury’s just before I left so my millage was only 50-65 for most of the season with one long tempo and one longer reps session a week. For indoors and outdoors my millage was raised slightly with 2 rep sessions a week one of them usually included a shorter tempo.

How have you found racing in the states different from NZ? How do you feel about three consecutive seasons?

The major difference would have to be the quality and depth of competition as well as the addition of the indoor season. I feel that running the indoor season doesn’t suit everyone and can sometimes make running outdoors that much harder.

Do you feel as if the deep level of athletes in the states has pushed you too a new level in performance?

Yes I think it has and will continue to do so.

What do you like to do outside of training and racing?

Normally just relaxing, catching up on homework or playing xbox.

What are your training and non-training plans for the summer?

Is your coach individualistic or is it very much a blanket training system for all the
Runners?

It can vary from day to day, the team can be split up one day but then we can have 800m guys with 10k guys for the sessions that Ron feels are crucial to everyone’s development, sessions like “the Michigan.”

How do you feel/respond to people back in NZ who don’t fully understand the US
system and just judge based on track times?

I think that judging people based on times is quite often fair enough, in the states it is much easier to run fast with conditions normally a lot better than back home it is expected that we be running fast. But having said that there is quite often underlying factors that people don’t consider.