Home Features Ben St Lawrence Q&A from the US: Part 1 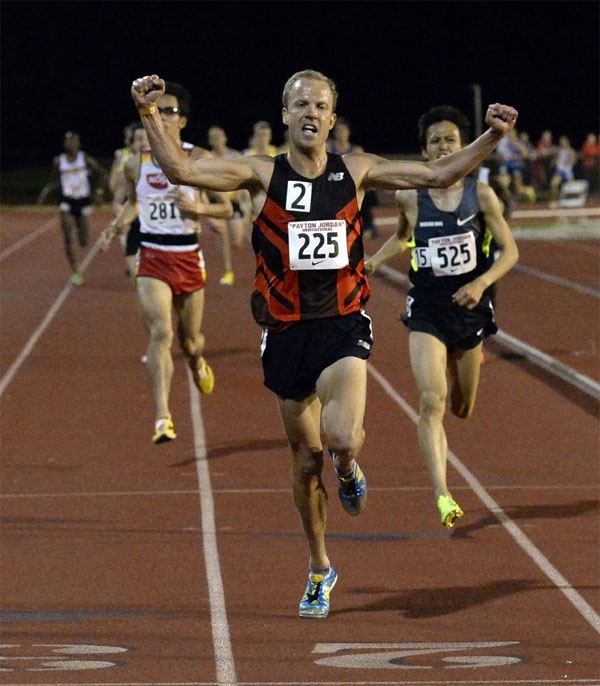 Ben St Lawrence, thank you for having a chat with Runner’s Tribe after your win in the 10,000m at the Payton Jordan Invitational at Stanford.

The race was paced to give everyone at shot at the A-qualifier for the World Championships and you were well under that and also won the race, you must be pretty happy with the result?

Thanks. I am very happy with it, most of my best results have been for minor places, so it feels great to finally get a win – particularly in race that has had some impressive previous winners. As far as qualifying times were concerned, I only needed to run under the B standard of 28:05 to secure a spot on the World Championships team for Moscow (having won the trial at Zatopek). However I knew I was getting into pretty good shape and there was no reason for me not to stick with the pace of 13:50ish through 5000m (I ended up about 13:55). After I had a look over the start-list, it seemed as though winning was a possibility if I had a good day, so we just decided to go for the win and let the time take care of itself.
How did the race pan out for you? Did you feel early on that you were going to be there at the end battling for the win?

The race went almost exactly as I had envisioned it, even down to the guy who came second. I was a little further back than I wanted to be during the middle of the race, but sometimes it’s easier to just relax and keep an eye on the guys at the front rather than jostling for position and constantly overtaking and being overtaken. There are so many guys there all wanting to run sub 27:40, all wanting to be in about 4th or 5th position – so it can waste a lot of energy to be stressing about being in the ideal position too early in a 25 lapper. I didn’t take any time at the front to push the pace, due to the fact that I wasn’t too worried about the time.

I had a lot of success two years ago by hanging back and then working into contention in the last 5 laps. This year I wanted to get to 2nd or 3rd place, just off the leader, with about 1km to go and then kick hard sometime in the last 800m. During the race I was feeling relatively in control, so I just tried to move up a few places a couple of times to make sure the leaders weren’t able to get a big jump on me. Suguru Osaka (2nd place, who actually beat me by 30 seconds in the Fukuoka Cross Country not long ago) made a pretty strong push for home from a couple of laps out, so I just covered his move and then had a bit left in the tank for the final straight.

I heard the commentators mention that Chris Thompson was making a strong move over the last lap, so I was ready to go sooner if I sensed him in my peripheral. Chris finished strongly but didn’t quite get back to the leaders. For me, it was just one of those very rare races that go almost exactly to plan.

You have a great ability to unleash a winning kick off a fast pace, you must be keen to put yourself in a position to kick like you did tonight in a major championship?

I have had some good results using my kick over the years, but there have also been a number of races where it has failed me, or where I’m just not able to be anywhere near the leaders at the end. The goal is to keep working on all areas of training to try to put myself in the right position at the right time during some bigger races.

What was your mindset after Nationals? Cameron Page ran exceptionally well to beat you in the 5,000m, would you say it is fair that you expected to win that race?

Cam ran an awesome race and was just too good for me on the day. I wasn’t at all surprised that he ran well, but I was surprised by the manner in which he won – just powering away over the last few laps, it was very impressive. I try not to expect too much before any race, as there are so many variables that can come into play.

I had been training with Cam quite a bit in the couple of months leading up to Nationals, so I knew he was ready to take a huge chunk off his PB. We had hoped to give ourselves a shot at the 13:20 B standard, by sharing the lead a bit and having Harry Summers take the lead for a while to get the pace going. Unfortunately we weren’t able to get the B standard, but did both go under the Australian Championship Meet Record, and Harry hung on for Bronze after leading to 3000m. It was a great night for the three of us, and our coach Sean Williams.

My mindset after the race was actually quite good. Although a bit disappointed at not being able to win the National Title, I was happy for my mate Cam, and knew that I was progressing very well for the 10 000m at Stanford. I didn’t have time to be disappointed really, as I had to get my long run done, get on a plane and focus on Stanford.

Where are you based in the US at the moment and whom are you training with?

I’m currently based in Laguna Mountain, near San Diego, in California. It is a great little altitude training location that Nic Bideau’s group has been using for years. This is my fourth time up here, and I love it. This year we’ve had: Collis Birmingham, Brett Robinson, James Kaan, Ryan Gregson, Paul Robinson, Lara Tamsett, Susan Kuijken, Selma Kajan, Zoe Buckman, Anna Laman and Julia Bleasdale. It’s a great group, we’re all getting on well, training hard, having fun while also posting some good results. A positive environment like this really does make the hard work a lot easier.