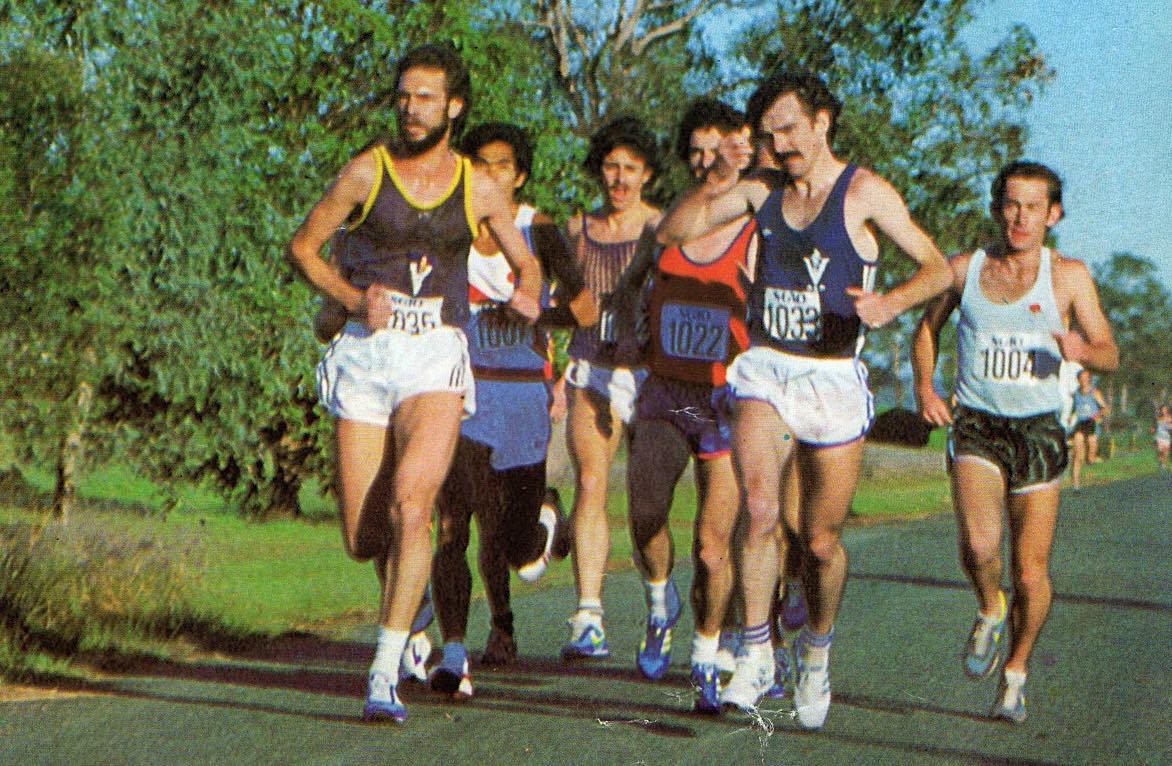 “If the coach cannot do it, he cannot ‘teach’ it – only talk about it.” Percy Cerutty

If the ‘Australian Running Bible’ was a novel, it would be a bestseller, with three co-authors. ‘Rab’ (Chris Wardlaw), ‘Clo’ (Pat Clohessy) and ‘Dick’ (Dick Telford). Forwarded by Arthur Lydiard, it would also have contributions from other authors, including Nic Bideau, Ken Green and many more aspiring ‘writers’. These life-long coaches have set down the foundations for how runners should build their training and racing.

Is the following week’s program familiar to you?

Any club level runner will tell you, they wake up Tuesday morning with a weird, sick like feeling in their tummy, because they know it means one thing – intervals are on the program that day!

Most likely some 1km reps, or 6 x 3 min, or a ‘Mona Fartlek.’ Thursday is typically the same thing – more intervals, this time maybe some ‘Deek Quarters’ or a threshold session. More of the same Saturday, but this time some hill reps, a ‘Telford Fartlek’ or a tempo run, or maybe a race if you’re lucky.

This weekly structure, including an easy ‘10 miles’ on Monday, Wednesday and Friday (or 60 min in the morning and 30 min in the afternoon or evening) plus of course the Sunday long run, has been tried and tested for decades by many Australian coaches and runners. And with great success. It’s what many of our greatest followed week in and week out during their successful careers.

The above is mainly due to the influences and coaching methodology of Rab, Clo and Dick.

If you were old enough to have been running at Falls Creek in the 60’s & 70’s (sorry Trevor ‘TV’ Vincent!) and have recently been to the mountain in the past 5-10 years, you will soon realise not much has changed on the weekly training program that most Australian runners follow.

Falls Creek highlights the inclusive environment of being a distance runner in Australia – you are part of a wonderful, collective fraternity. Athletes training together and coaches sharing knowledge. It brings out the best in everyone.

But back to the weekly training program. Here are 5 questions that immediately come to mind:

I recently wrote an article on who will be Australia’s next sub 2:10 male marathoner. The article highlighted the breakthrough performances of some of our current female marathon runners, including Jess Tengrove and Virginia Moloney.

Both runners have coaches that are relatively young in terms of coaching. Without having intimate knowledge of their coaching philosophies and styles, maybe being younger means these coaches have adopted a different coaching style to that from the ‘Australian Running Bible’.

Maybe to discover our next sub 2:10 marathoner the traditional Australian training regimen needs to shift and change?

At first glance, other countries and their distance running coaching methodology, indicates more of a shift away from what the typical training week looks like from the Australian Running Bible.

In the marathon distance, there definitely appears to be much more of a focus now on faster paced long runs, longer tempo’s and longer interval based sessions by coaches in different countries.

Renato Canova is the main coach that comes to mind when looking at the specific way in which he trains and prepares his marathon chargers. At the other end of the spectrum, in the 5km & 10km distances, Alberto Salazar, is another coach whose methods have possibly shifted away from what was considered the norm. The emphasis on pure speed in his approach is clear.

Are current Australian coaches just ‘copying’ & ‘tweaking’ a template developed many years ago?

It’s natural that successful distance runners that turn to coaching mimic and implement what worked for them in training, which could be the main reason as to why our training systems and programs haven’t changed a lot. As the saying goes, “If it ain’t broke don’t fix it”. Unlike a sport such as swimming, the majority of Australia’s top distance coaches were also very accomplished runners in their own right.

Maybe the coaching trends in Australia will change through more coaches being specific to just one event. The ‘Australian Running Bible’ program essentially means that distance runners should be competent at distances from 1500m right through to a half marathon and even marathon. Could this functional and broad approach be too general? Melbourne-based 800mtr coach Justin Rinaldi is a good example of a coach whose methods and philosophy is geared towards training specifically for just the one distance.

Being a successful coach means developing your own coaching philosophy and structures, but at the same time sticking to the basic principles and fundamentals of a sport, in this case, distance running. And it seems those basic tenets of distance running have barely evolved in decades.

Advances in sports science, technology and footwear have increased rapidly, yet the typical training week from the ‘Australian Running Bible’ still remains predominantly the same.

All of us that are part of the Australian distance running fraternity should feel privileged that many training sessions we undertake, and programs we follow, have been largely influenced by the 3 co-authors of the Australian Running Bible.

However, in the coming years if our up-and-coming coaches are still following the same training program from the Australian Running Bible, then coaching, and consequently, performance, will not have progressed and improved like that of other countries and coaches.

“A teacher is never too smart to learn from his pupils. But while runners differ, basic principles never change. So it’s a matter of fitting your current practices to fit the event and the individual. See, what’s good for you might not be worth a darn for the next guy.” Bill Bowerman